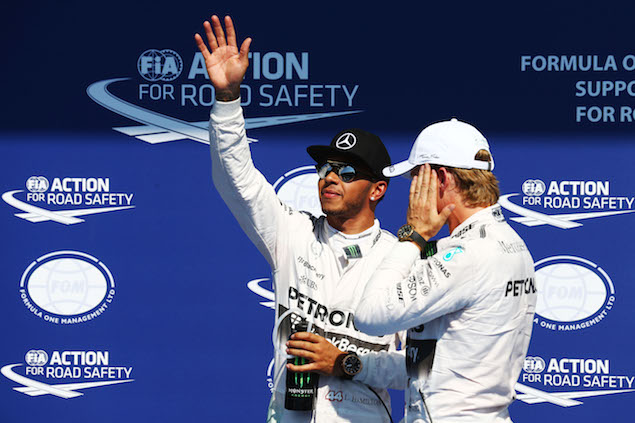 Lewis Hamilton: “I’m really happy with the performance of the team and the car this weekend. It felt good right from the start and I'm so grateful for the big push the team has made in continuing to improve the car. It can be tough to find the ideal setup and then get a good rhythm at this track - but I've felt comfortable throughout. Saying that, Nico has been quick all the way through and it's generally been very close between us. Fortunately for me I pulled my two best laps out at the end. Of course, it's great to have pole, but I'm well aware that it's only one step. There's a long run down to turn five so anything can happen there and especially at the start. The team has done a lot of analysis on that front and we've been working on it in the simulator and here at the track. I feel we're as ready as we can be so we'll see how it goes. For now, though, I'm happy with today and looking forward to tomorrow's race.”

Nico Rosberg: “Qualifying went well until the end. But in Q3, Lewis just found so much time which unfortunately I didn't manage to do. So, a disappointing day, but there is still so much to play for in the race. I need a good start and then after Eau Rouge there should be a good chance to overtake at the end of the long straight, so I will push hard to make it happen. We have a new starting procedure which we all need to get right and it will be interesting to see how that works tomorrow. But, overall, I'm still very positive that a win is possible here in Spa.”

Toto Wolff, Head of Mercedes-Benz Motorsport: “We're very pleased with today's result. After our race in Hungary, it was important to lay down a marker and we did that this afternoon. Lewis drove a fantastic lap - he had almost unbelievable pace in sector 2, and we had seen glimpses of that during practice this morning. But Nico has looked very competitive all weekend and will be strong tomorrow too, I am sure. Looking to Sunday, we are all stepping into new territory with the revised formation lap and start procedures. We have done a lot of practice this weekend, like everybody else, and now we need to wait and see how it turns out tomorrow afternoon.”

Paddy Lowe, Executive Director (Technical): “A fantastic result to secure the front row in Spa - and in such unusually warm weather too, which I think we're all struggling to get used to! Congratulations to Lewis on two quite incredible laps at the end - and on taking the 2015 pole position trophy for which he now cannot be surpassed. For Nico, he was right in the mix until Q3, so we're confident he'll be strong in the race also. Both cars ran flawlessly, so a great job from the team in what was a tense session, with the competition between our two drivers extremely close for the majority of running. In fact, analysing the results throughout the grid, it looks set to be a tightly contested race tomorrow, so we're looking forward to an exciting start to the second half of the season.”