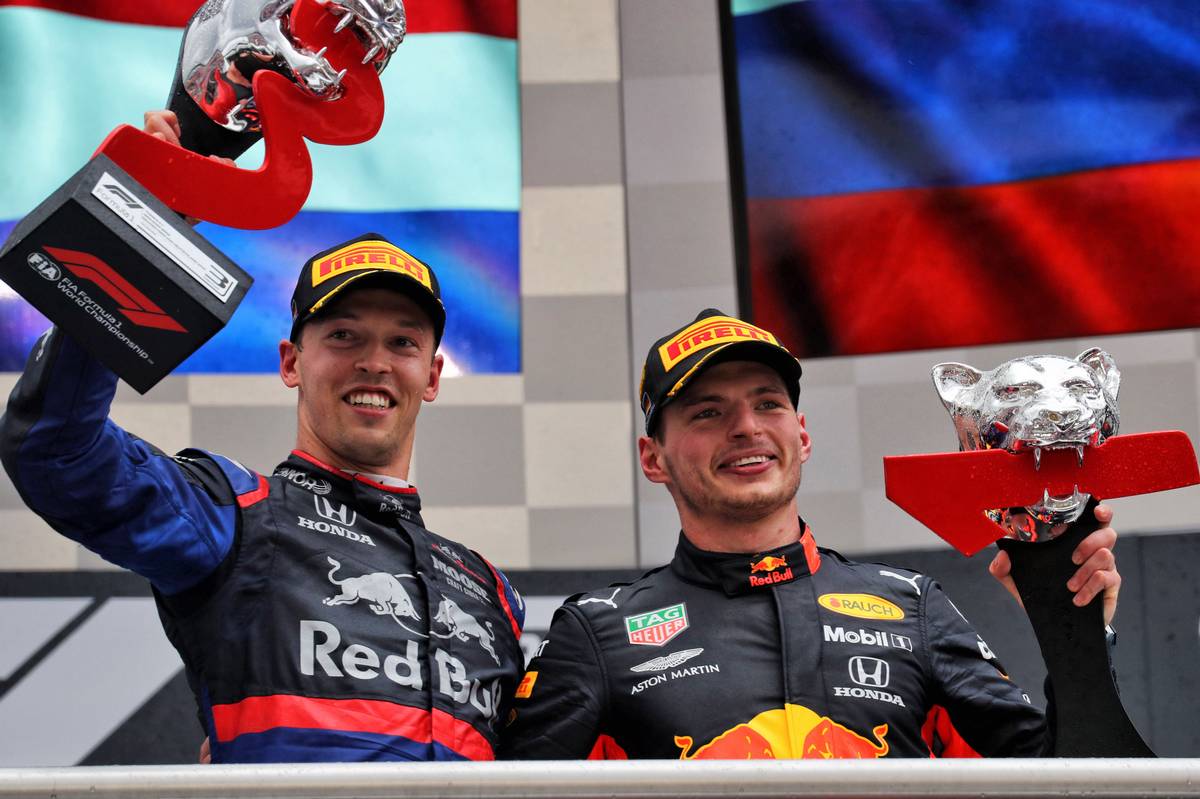 Alexander Albon
"It was a good race today! I was a bit scared at the start, learning how the car behaves in the wet around this track, although, I'm really happy with how I performed as it was my first time in these conditions in an F1 car. The pace was really good, we were a bit fortunate and we timed our first pitstop right, and I was really excited racing in P4, I was thinking 'OK here we go!' Unfortunately, at the second stop we were caught out and pitted a lap later than Dany to switch from wet tyres to dry, so four cars passed us. It's funny, it's like a disappointing P6 because we were running in P4 for quite a while. It was an amazing job by the team, the strategy was great and we were able to bounce back from a difficult Qualifying."

Daniil Kvyat
"It's incredible to be back on the podium in what could be called my 'second career'. I thought it would never happen again in my life, so I'm so incredibly happy. There's so many emotions I still need some time to let it all sink in! This achievement is so great for us since it's 11 years since Toro Rosso's last podium with Sebastian in Monza. It was such an amazing day and I'm so happy. Thank you to everyone in the team, it was just an incredible day. I was readier than ever to fight for this kind of position. This year I feel more mature, my head is cooler, and I'm readier to fight on top, so I think I proved that today to myself and everyone around here. I hope this will become a habit soon! These kinds of races aren't easy, it was a tough call to pit that lap earlier, but it's a 50/50 call between the team and me, we win and lose together and today we won together."

Guillaume Dezoteux, Head of Vehicle Performance
"What a race! This is an amazing result for us and it has been a fantastic team effort to achieve it, here at the track, in our Operations Rooms in Faenza and Bicester and from Sakura. Today was about being on the right tyre at the right time and making no mistakes. The pit-wall discussions were intense during the entire race, engineers were managing the situation well, the mechanics made no mistakes, we had good pitstops and obviously, both drivers showed a fantastic drive. Daniil was on it straight from the start, making no mistakes and giving good feedback in those epic conditions. Alex has been amazing if you consider it was the first time he ran our car in the wet! Both have been able to keep their head down, trust our decisions and push to the end. This is a great day for STR and Honda and gives a lot of motivation to everyone for the rest of the season."

Franz Tost, team principal
"It was another fantastic and very exciting Formula 1 race. Congratulations to Max Verstappen for the victory and to Honda, for their second win in the turbo era. Enormous congratulations to Daniil Kvyat, he really deserved this third position! He had a fantastic race, he showed really good overtaking manoeuvres and he could keep focused until the end without any mistakes, in difficult conditions. The rain seemed to be on our side, so thanks to the rain Gods!!
I must compliment the strategy team, the call to bring Daniil in for Option tyres quite early was a risky one but it paid off and he was able to finish on the podium. We had a fantastic car today, the engineers did a great job on the setup side. I'm also very satisfied with Alex's performance as he had a fantastic race. It was the first time for him driving an F1 car in such changing conditions and he had everything under control, including managing the tyres, which was very important to finish in sixth position. I want to thank the everybody in Toro Rosso, who have made this possible. We are now looking forward to Budapest, in the past we showed good performances there and we can't wait to do it again."

Masamitsu Motohashi, Chief Honda Engineer
"To see Daniil on the podium was an incredible feeling coming after we have worked so hard with Toro Rosso for one and a half seasons. In recent races, we have struggled a bit and even today it was a difficult race for us. However, everything came together today. Last year our best result was a fourth place, even if we came close to getting good results in some other races too, which for one reason or another did not happen. Today, we feel we did the best we possibly could. This was an unforgettable race – the team, drivers and all Honda members working so well together. I would also like to thank our fans, especially those in Japan, who have never given up on us. Today's result is for them also."

Toyoharu Tanabe, Honda F1 Technical Director
"An absolutely fantastic result, securing our second win of the year with Max Verstappen, but this time extra special, with Daniil Kvyat making it two Honda drivers on the podium. It was a very difficult race, because of the changing conditions between wet and dry and the result is down to the excellent drives from both drivers, spot on strategies from the two teams and great work from both pit crews. Honda really appreciates their efforts. After winning with Aston Martin Red Bull Racing already in Austria, it is particularly pleasing to see Red Bull Scuderia Toro Rosso on the podium, as they helped us get back on the right road to success last year. We will briefly celebrate on this special day, but immediately focus on next week's race in Hungary."