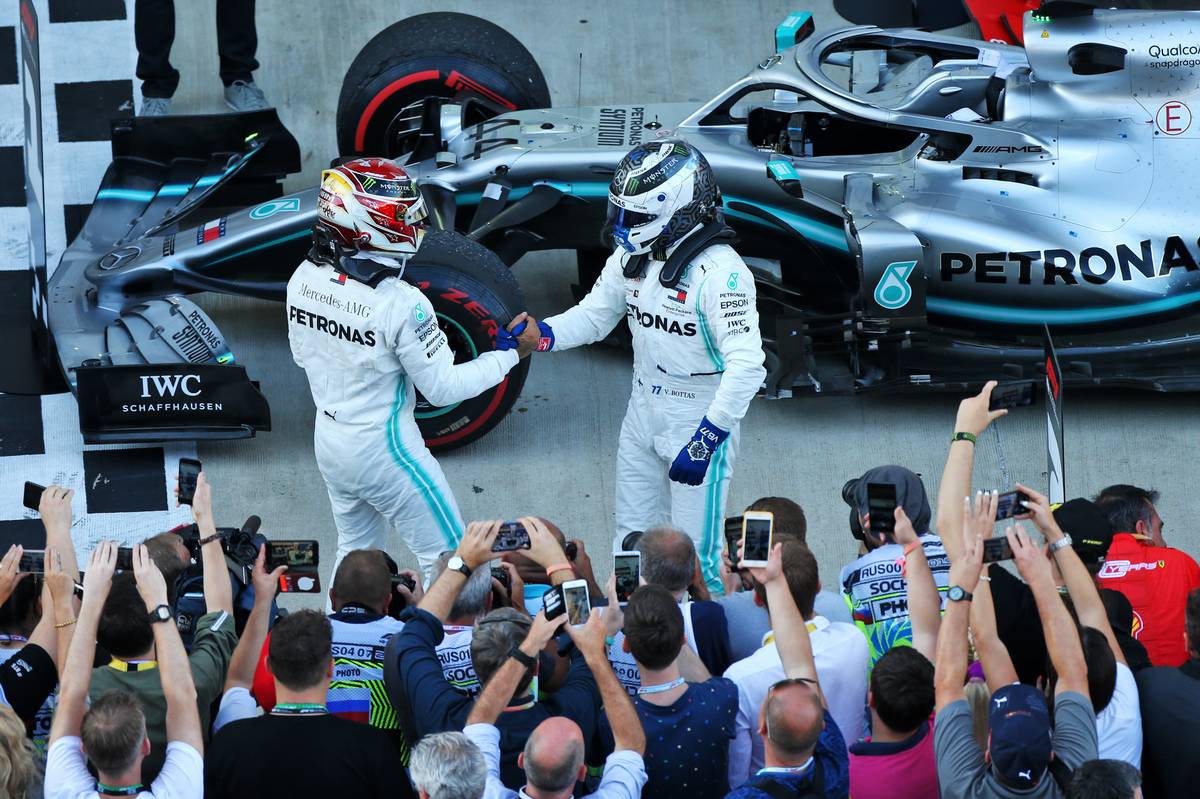 Valtteri Bottas
"It's been a while since we last had a 1-2 and it feels really good to stand up there on the podium together again. It's really encouraging and motivating for the entire team. We knew a 1-2 would be tricky to achieve, but possible, so we spoke about all the different strategies that would give us a chance this morning. and I think we did a really good job as a team today. It's a really good result if you think about how much we were struggling yesterday. Ferrari had a quick car all weekend long, I think they were quicker as well today, so to walk away with a 1-2 means that we did a great job as a team in all other areas. I lost quite a bit of time when I was stuck behind Sainz in the beginning and I was also struggling to match the times on the Medium tyres, but it was a lot better in the second stint on the Soft tyres. I was under a bit of pressure after the Safety Car restart, but it was all under control. Ferrari has made some good improvements in the past few weeks, so we know that we need to keep pushing for Japan, but I'm looking forward to the challenge."

Lewis Hamilton
"This win feels like it has been a long time coming and it was just an incredible job from the whole team: never giving up, pushing forward, always trying to be innovative. It's incredibly inspiring to be part of that and amazing to have this result today considering how quick the Ferraris were in that opening stint. It was a really hard task to keep up with them, especially on the offset tyre, but we kept pushing and the car felt really good today. We thought that their soft tyres would drop off during that opening stint, but they had such good pace that I was struggling to keep up with them - and that's probably a little warning for us, because it looked like they got their calculations right in that regard. I managed to stay within shooting distance, though, and started closing down the gap as their tyres started to drop. Charles pitted, then I started catching Seb, and we were in a good position to offset and go long - even had the Safety Car not come out, it would have been a really good race. Then everything fell our way, and after that it was a question of building the gap, saving the tyres but also getting to the finish as smoothly as possible. Looking ahead, of course the races are counting down but we are just trying to take things one race at a time, put one foot in front of the other and not stumble. When you have a battle like this, you're working flat out, turning over every stone and questioning every little thing you can do better. We love that challenge and I'm really excited for the next races."

Toto Wolff, head of Mercedes-Benz motorsport
"Today is one of those races that go to show the points are won on Sunday and not on Saturday - and that, most of all, you can never give up. We managed to take a one-two finish today even though we didn't have the quickest package and that is a very special feeling. We started on the Medium tyre and one of the reasons we did that was to have the flexibility to stretch the opening stint - both to take advantage of a possible Safety Car after Ferrari had pitted, but also to have the option of using the Soft in the final stint. So we were running it long, hanging it out there a bit and then the race came right towards us with the VSC for Vettel's failure. Both of our drivers did a fantastic job today: Lewis was relentless, keeping the pressure on and holding onto the Ferraris in the opening stint, then able to manage things well after the stop. As for Valtteri, we saw two years ago that he knows his way around this track with a Ferrari breathing down his neck, and he didn't put a foot wrong this afternoon even with huge pressure from Leclerc. But even in the joy of this win, we must not lose sight of the fact that we didn't have the best package here this weekend. We have some updates to come in Suzuka, but most of all we need to put our heads together over the coming days and understand how to maximise our package in Japan, so that we extract every bit of potential from it and come back stronger."

James Allison, technical director
"It feels like an awkwardly long time since we last won a race - and this result is all the more welcome for that. This wasn't an easy, dominating, commanding from the front type of victory - but when you are up against it and still manage to win, it actually feels really sweet. When we approached qualifying yesterday, we did so with the feeling that, wherever we qualified, we were unlikely to lead out of Turn 2 because of the long run from the start and the powerful slipstream effect. So running the Medium tyre in our opening stint gave us possibilities to recover and we were fortunate in how that played out. Both drivers put in immaculate performances today: Lewis was error-free throughout and Valtteri did a very good job controlling the gap to Leclerc and keeping him out of DRS range. He was under immense pressure, especially in the early laps after the Safety Car, and he didn't stumble under a long period of sustained pressure. Well done to the entire team today, both here at track and back at the factories: after a tricky start to the weekend, it's a special feeling to be heading home with the silverware and plenty of useful learning to be applied to the upcoming races."