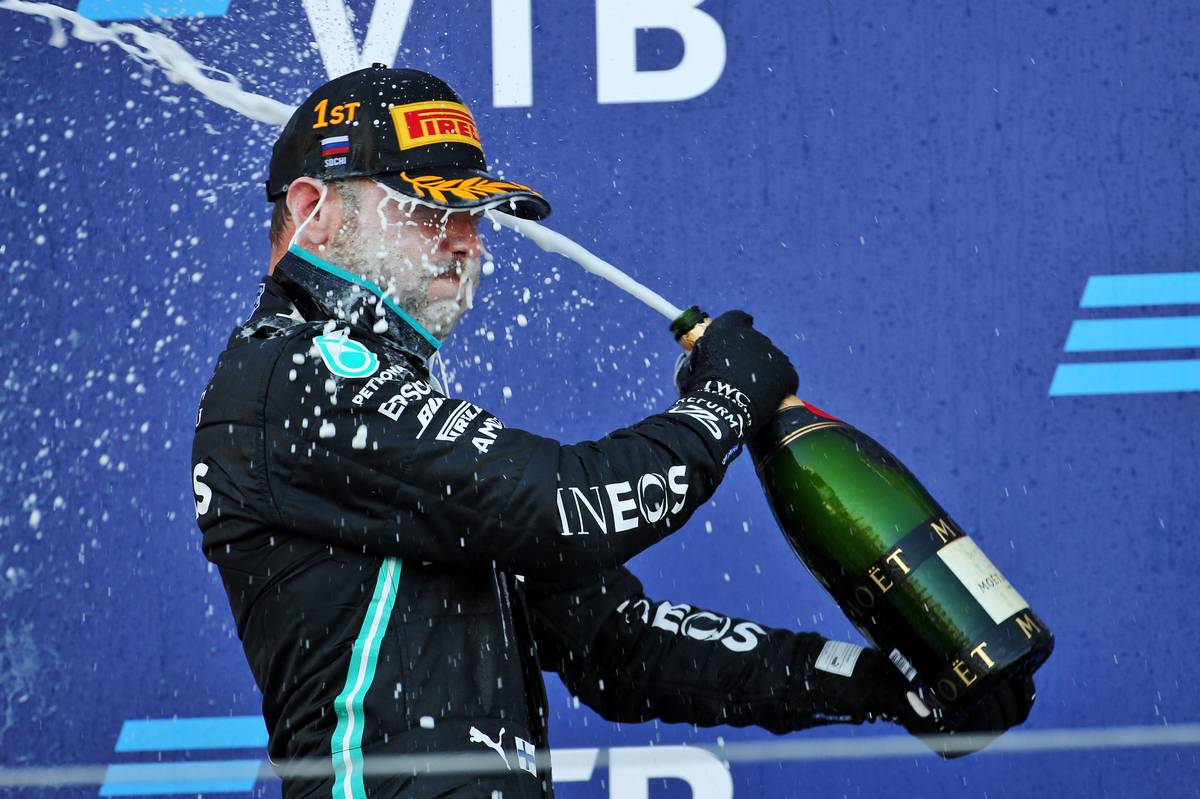 Valtteri Bottas
"What a feeling! It's been a little while since my last win, but I knew there would be opportunities heading into the race and luckily things went my way this time. It was a bit tricky at the start because an insect hit my visor just as I was entering the braking zone, which meant I couldn't really see where to brake and so I went deep. But I knew it was going to be a long race and with the Medium tyre, there would be chances later on. Lewis then had his penalty, and once I was in clean air, the pace was really strong, and I was able to control everything without any real concerns. Now I need to keep this momentum up. There are quite a few races to go and you just never know, so I'll keep pushing, I won't give up and we'll see how it turns out in the end."

Lewis Hamilton
"Firstly, I want to say a big thank you to all the fans who came out this weekend, I hope you enjoyed the race. It wasn't a great day for me, but it is what it is. We need to go through everything and understand exactly what went on to get those two penalties. That obviously dropped me back and the first stint on the Soft was also challenging, as I was trying to go as far as I could on that tyre. I think I did pretty well on the Soft and from then, it was about trying to recover as much as possible. It was just one of those days, but I'm grateful that I still managed to get a podium, bag some points and didn't lose as much as I could have done. Congratulations to Valtteri on the win, and I'll take the points and move forward."

Toto Wolff, head of Mercedes-Benz motorsport
"We've held onto our 100% winning record in Sochi and a one-three finish is a great result for the team, so we're very satisfied. On Valtteri's side, the win was long overdue and he drove a brilliant race. There were no mistakes, he managed the tyres well and controlled it to the very end, cruising across the finish line. On Lewis's side, it was a frustrating race. There is some room for interpretation with the practice start rules, so clearly, we need to analyse why we made the mistake and take the penalties on the chin. Like always, we win and lose together, never pointing the finger but instead trying to investigate what we can do better and how to improve. Clearly, we've had two incidents, here and in Monza, where we have made mistakes, and learning from these will only make us stronger in the long run. Nevertheless, we increased our Championship advantage with a strong result and now look ahead to the Nürburgring."

Andrew Shovlin, chief race engineer
"Valtteri did an excellent job today and it was very nice to see him on the top step of the podium again. He had a good weekend overall and drove a strong race to finish it with a win. Lewis had a more difficult weekend. The issues already started yesterday when he had his first time in Q2 deleted and the session was red flagged when he was at the end of his second Q2 run. It ultimately meant that he had to qualify on the Soft tyre which put him on the wrong foot for the race. The challenge with that compound is they keep fairly consistent grip levels until you get down to the underlayer of the tyre - and then you suddenly lose a lot of grip. When we pitted Lewis there was very little rubber left on the rear left tyre and while it might have been able to do another lap or two, you just risk suddenly losing grip which would bring other people into your pit window. Lewis served his penalty when he pitted and after that it was all about trying to secure the maximum result. It was a difficult day for Lewis, but he still came away with reasonable points and still holds a commanding position in the Championship. We're now looking forward to going back to the Nürburgring in two weeks; there are a number of things we could have done better in Sochi this weekend and we'll try and put them right at the Eifel GP."