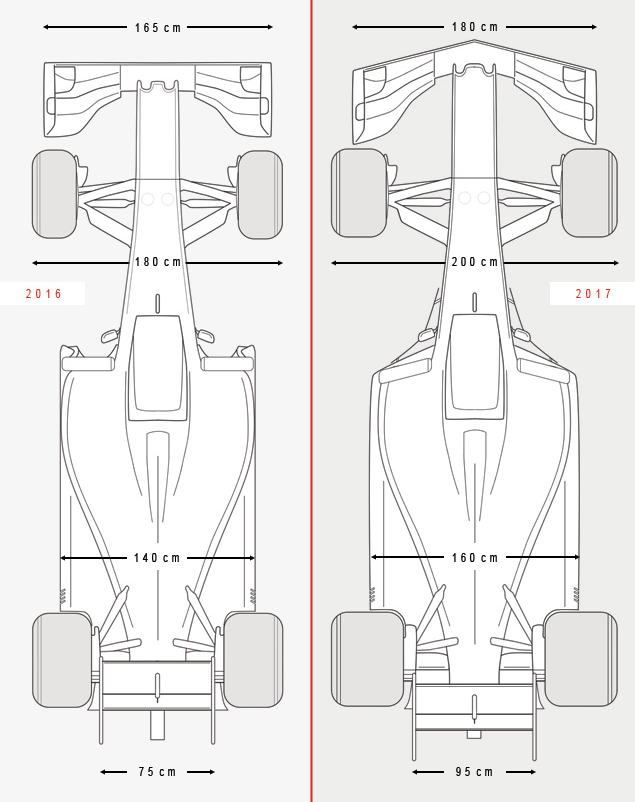 There is no denying that 2017 F1 cars will have a radically different look. In order to generate more mechanical grip, the tyre widths will increase to 305mm at the front and 405mm at the rear, compared to 245mm and 325mm at present.

There will also be more downforce. In order to offset the increase in drag due to bigger tyres, the front wing span will gain 150mm, going from 1650mm to 1800mm, but still remain narrower than the front tyre width. It is worth mentioning that the nose height will not change, after successive modifications these past few years.

The rear wing will also be quite different, with the current high rear wing - which is 750m wide and 950mm high – being pushed 200mm backwards and replaced by a lower, wider wing measuring 950mm by 800mm, i.e. close to pre-2009 aero specifications.

A higher diffuser – it can start 175mm ahead of the rear axle – will also be allowed, which will increase 50mm in height (from 125mm to 175mm) and 50mm in width (from 1000mm to 1050mm). The rationale behind the changes is to generate more downforce from underneath the car. The wishbones will also have a higher angle of incidence, thus making them more efficient aerodynamically.

The next change is more visual than structural, with the front wing set to have a unique ‘V’ shape and an offset angle of 12.5° between the tip of the wing and the endplates. In the same philosophy, the leading edge of the sidepods will no longer be straight but oblique, while a reduced exclusion zone will allow for larger bargeboards.

The sidepod inlets will also be oblique (in top view, these form a 15° with the longitudinal axle). The cockpit should theoretically be fitted with a driver head protection system, with the FIA set to introduce the Halo concept as a result of Red Bull's Aeroscreen being further behind in its development.

Finally, the minimum weight will increase from 702kg to 722kg. Consequently, the 100kg fuel limit will be raised to 105kg, also to compensate for the increased drag in a straight line due to wider tyres and wings. 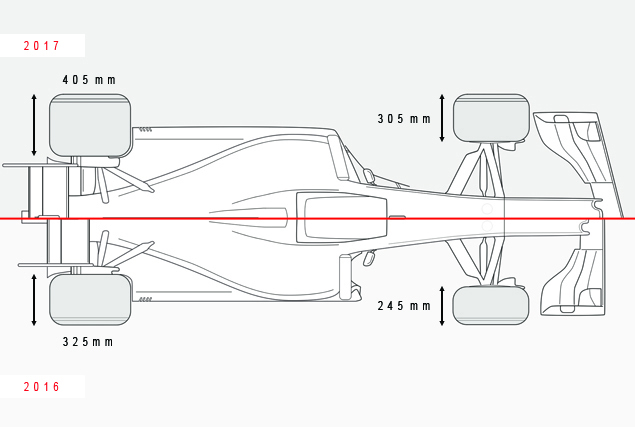 The new power unit agreement for the 2017-2020 period “includes a package of measures aimed at achieving performance convergence”, reads an FIA statement. As a result, the engine development token system will be scrapped from next year onwards, this in order to allow Mercedes’ rivals to catch up (unsurprisingly, Honda has already praised the decision).

The FIA added: “Constraints on power unit part weights, dimensions and materials… will be introduced in 2017 and in 2018”. For instance, the crankshaft will have fixed dimensions, a piston will have to weigh at least 300g, the MGU-K 7kg, the MGU-H 4kg, etc. In 2018, the temperature of the compressed air will not be able to be 10°C or more above ambient air in a bid to cut costs on cooling systems.

The FIA will check performance convergence on a yearly basis by measuring the outright power of the V6 turbocharged units with a series of sensors. The levels of power will be assessed on every lap across the first three grands prix in a season, namely before the necessary deadline to ask for a change to the following year’s engine specs. However, F1’s ruling body already admitted it would have little leeway if an engine supplier decided to hide its hand over these first three races before unleashing its power unit thereafter.

From these measurements, the FIA will draft a performance index of all power units, which will then be converted into lap times around Circuit de Barcelona-Catalunya, the benchmark layout when it comes to assessing an F1 car. However, the FIA has denied having prescribed a target of 0.3s in terms of performance difference. It must be noted that convergence has not been mandated but set out as a guideline. If the governing body deems the gap between power units to be too big, it will then inform the Strategy Group, which will act accordingly. While the FIA aims at achieving performance convergence, it cannot force it since this would go against the very principle of competition.

Last but not least, a sound generator is currently under development, with the FIA “using the energy on the exhaust” to improve the noise of the current power units in the wake of recurrent complaints from disgruntled fans. 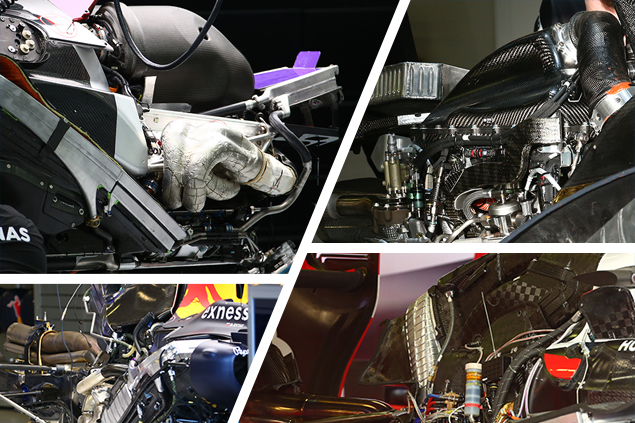