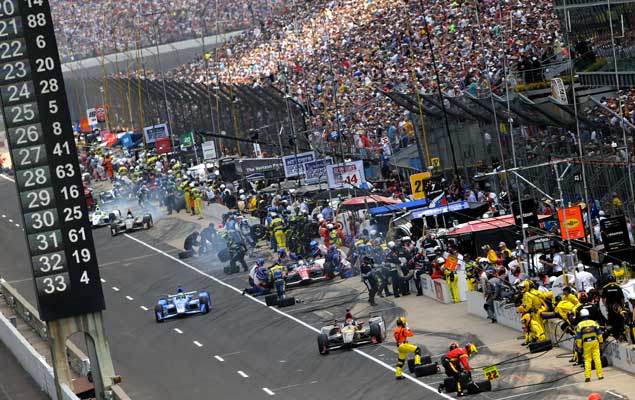 The Andretti show is followed by a solemn, moving, yet impressive moment, as the national anthem – the Star-Spangled Banner – rings out over the PA system all around the track.

At 12:00pm sharp, the time has come for the famous “Lady and Gentlemen, start your engines!” (let’s not forget UK female racer Pippa Mann). The crowd is now white hot, courtesy of several factors that include a searing 33°C, the beer, and the anticipation of indulging in an unforgettable spectacle.

The 100th running of the Indy 500 finally gets under way and the 33-strong pack hurtles towards us at 360kph… that’s 100 meters per second! From Turn 3 where we stand 50m away from the track, the impression of speed is staggering and you can even feel the hot air flowing by as the cars whizz past. Unlike what we are used to seeing in European races, drivers constantly swap the lead. I counted 11 changes in the opening 17 laps alone!

The person next to me, a big, red-headed, tattooed guy is yelling each time Ryan Hunter-Reay goes P1. I try to explain to him that in the #22 neon yellow Penske there is France’s Simon Pagenaud, who is a true contender. Apparently, he could not care less. 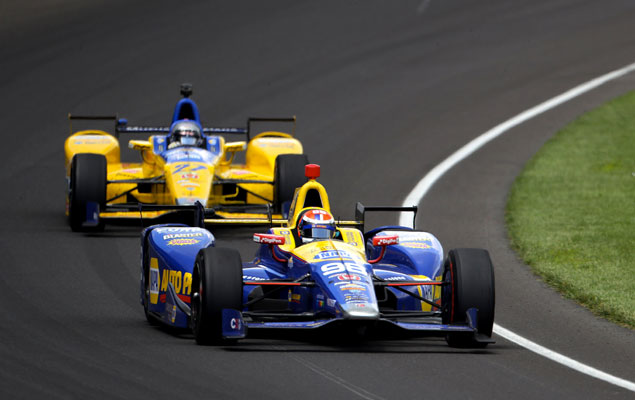 As the race unfolds, so do the different fuel strategies and it often looks like a giant game of Russian roulette. Some gamble on making fewer stops by pitting under yellows and achieving as many laps as possible while running on fumes. Even if this means being out of gas after the chequered flag.

In this high-stakes game, Andretti Autosport and IndyCar rookie Alexander Rossi hits the jackpot when the 24-year-old takes a stunning victory thanks to the clever strategy of crew chief Bryan Herta, who sealed a tie-up with Michael Andretti’s team ahead of the current season. You can tell Rossi didn't really expect to end up splashing the winner’s milk in Victory Lane! As for my neighbour, he looks satisfied: the 100th running of the Indy 500 had to be won by a US racer.

Rossi, who had a five-race stint with Manor last year only to lose out to the better-funded Rio Haryanto, the driver Gene Haas overlooked for a seat on his new American F1 team, and the man one who finished runner-up in the 2015 GP2 Series with three wins, well, this Rossi is now part of the Indy 500 legend. It is so befitting that the 100th edition crowned a new star. What a fantastic story!