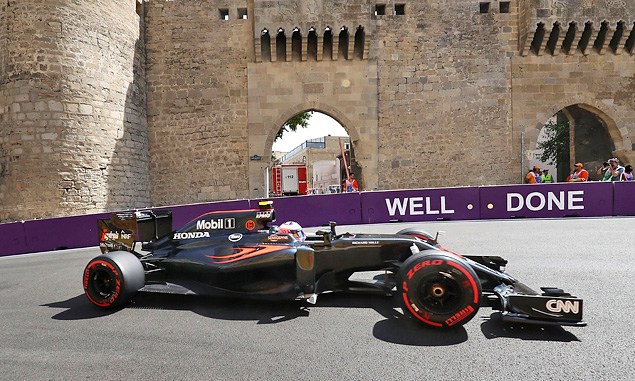 Fernando Alonso
“That was quite a tricky qualifying session: Q1 was very stressful, in fact, as it wasn’t easy to do a clean lap as there were a lot of incidents, yellow flags and traffic. It was tough.

“While we didn’t quite have the pace to get into Q3 today, because other teams are able to turn up their engines, we didn’t maximise our potential either, as I believe we could’ve qualified a little bit better than 14th.

“On my final Q2 lap, there was a yellow flag at Turn Three for around 15 seconds, which meant I couldn’t open the DRS, so I lost a couple of tenths. I also think we probably didn’t get everything right ourselves – we were a bit unlucky, because we encountered traffic and were out of sequence with the cars around us.

“So, 14th position isn’t ideal, but we saw how many incidents there were, and how many people went off during qualifying, so there’s still everything to fight for tomorrow. A Safety Car or an incident could quickly put us in a position to score points – so that has to be our aim.

“Whatever opportunity comes our way, we’ll be there, focused and ready, to take it.”

Jenson Button
“In Q1, I locked up into Turn 15 – we’d fitted new brakes ahead of quali, which we always do, but they were a bit more ‘grabby’. It’s a real shame because I’d been seventh or eighth all weekend – and while I’m not sure we’re that quick, we’re definitely not 19th either.

“It isn’t easy around here because of the traffic, but after I’d flat-spotted, I did a donut to spin the car back around, and that isn’t usually the best thing for these tyres, so we should have come in and fitted a fresh set of tyres for the rest of Q1. We thought we’d have more of a margin – but that wasn’t quite the case.

“We just need to have some fun tomorrow.”

“We always knew that this afternoon’s hour-long session was going to be critical – particularly in Q1, when the track would be at its busiest. Unfortunately, Jenson struggled for a clear lap, locked up into Turn 15, encountered traffic and evaded yellow flags, then couldn’t extract the maximum from a somewhat tired set of Supersofts on his final flying lap.

“While Fernando made it into Q2, he too didn’t manage to record a truly representative time, difficult as it was to cleave a clean lap between the numerous yellow flags encountered during the session.

“Fortunately, tomorrow’s race looks set to be unpredictable and exciting – one where anything could truly happen. We’ll go away and lick our wounds this evening, but, mark my words, we’ll be pushing hard tomorrow to take advantage of every opportunity. This isn’t over.”

Yusuke Hasegawa, Honda R&D head of F1 project
“We expected today’s qualifying session to be difficult, especially because pace is highly influenced by the long straight of the track.

"Though we still believe that the overall package is competitive enough to fight with the mid-field cars, both Jenson and Fernando suffered with traffic and yellow flags, and could not put a clean lap together to put them through into Q3.

" Looking at the results of the GP2 race this morning, this circuit is extremely unpredictable resulting in many on-track incidents, therefore we may still have a chance to collect some points if we manage the race tactically, so we will work on the strategy with the team throughout the 51 laps.”