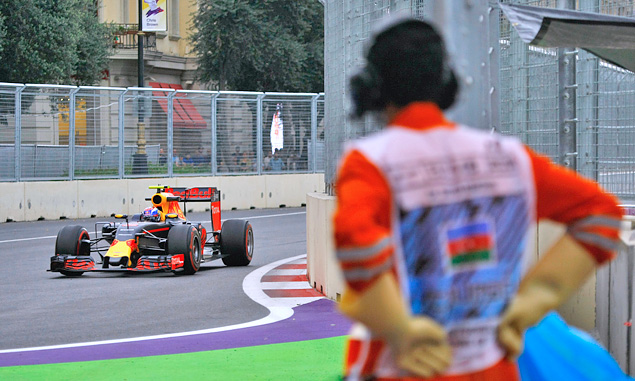 Daniel Ricciardo
“It’s my third front row of the season so that’s really nice, I owe a big thanks to the team for getting me to the start of that queue (in the pit lane), that was a crucial part of it and allowed me to get a clean lap. My first lap in Q3 I went wide and made a few mistakes so we needed that last run and I’m glad I was able to execute a good one. We learnt a lot from yesterday and were able to connect the dots overnight which led to a strong day. The race tomorrow is going to be really interesting, I would be very surprised if it’s a dull and boring race. If anyone hasn’t watched the GP2 race from this morning I suggest they do. Judging by it you need to survive, be smart and pick your opportunities to be fast using the slipstream well. I think it could potentially be race of the season so it’s going to be fun. On average we have been having better starts than Mercedes, so if I get a good start it won’t be too tactical, just aim to get good track position and then figure it out from there. I have been handed second place on the grid by Perez’s penalty so we’ll take what we get and see how we go tomorrow.”

Max Verstappen
“I think today we could have been P3; when the red flag came out I was already five-tenths up on my lap from Q2 so a 1:43.9 was in sight, easily. It’s just unfortunate I got ruined by Bottas in Q2, and then after the red flag in Q3 with two minutes to go, he did exactly the same thing, so again, very unfortunate, but the pace is there. I don’t need to have a chat (with Bottas), I’ll just focus on tomorrow. We know from GP2 there will be a lot of action and overtaking, so it will be a very interesting race for sure. It will be interesting to have Lewis behind me, he’ll be very quick. There are a lot of opportunities on this track – there are a lot of straights, but even in the turns you can overtake, so I’m very happy with the performance we showed today. It was all coming together and we have a good shot tomorrow. You have to find a compromise with setup, our rear wing is small so we lose a bit of down force where we are usually very strong but still we are up there, so I think the car is performing well.”

Christian Horner, Team Principal
“After three really exciting, action-packed qualifying sessions, to line up on the front row of the grid with Daniel Ricciardo is more than we could have ever expected at this circuit. The red flag caused by Lewis Hamilton left only 2m: 05s to go so it was a race to get to the line to start your final timed lap and Daniel absolutely nailed it. We managed to get him out first for an excellent qualifying lap to qualify third which obviously becomes second with Sergio’s penalty. Max endured a much more frustrating Q3, having twice encountered Valtteri Bottas at turn one who inexplicably decided to overtake him up the inside compromising both of their laps, on the first and second run, and unfortunately that has left him ninth on the grid but at this circuit it looks like overtaking is possible and it’s sure to be an action-filled grand prix tomorrow.”