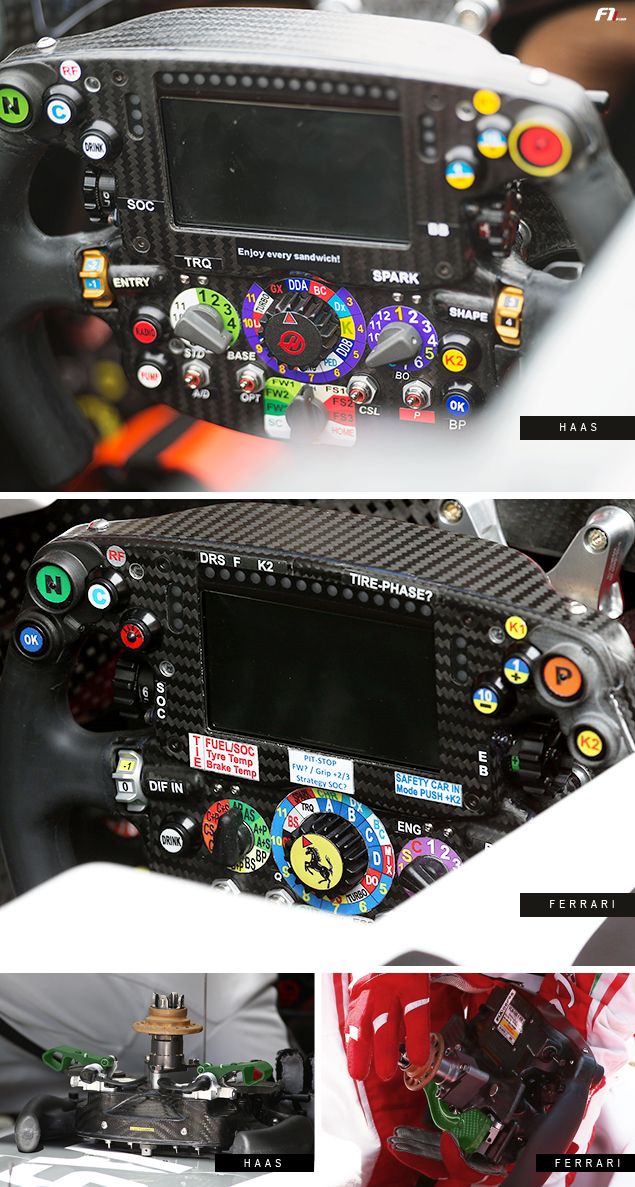 Given the strong technical partnership between Haas and Ferrari, this will not come as a surprise that the steering wheel fitted in the cockpit of the VF16 is almost identical to the model used by the Scuderia. Last year, the FIA reduced the list of parts any F1 team must produce and manufacture on its own in order to be given an entry in the world Constructors’ championship.

Appendix 6 of the sporting regulations states that a team must build the monocoque, the survival cell, the front impact structures, the roll over structures, the wings, the floor, the diffuser, and the ‘bodywork’ – basically any surfaces where the air flows over. In Haas’ case, renowned chassis maker Dallara is in charge of manufacturing these elements at its Parma factory in Italy. All the rest (namely the ‘unlisted parts’), the US newcomers can buy from Ferrari, which include the power unit, the gearbox, the rear crash structure, the suspensions, the brake ducts… and the steering wheel!

But while the Haas model is indeed manufactured by Ferrari, it is not exactly the same as the one used on the SF16-H. Thus, the three central rotary dials have the same number of positions but the indications and colours are different. The ‘Enjoy every sandwich’ reminder is also a bit more fun than the cheat sheets seen at Ferrari. Below the dials, the switches on both ends have been replaced with buttons (‘PUMP’ underneath ‘RADIO’ and ‘OK’ below ‘K2’). As for the toggles, the Haas version draws more inspiration from the Raikkonen layout than from the Vettel installation.

However, the biggest difference between the Haas and Ferrari models comes at the back of the steering wheel.

Double-clutch systems were banned ahead of the current campaign but there are still two paddles on the VF-16’s steering wheel. Both engage the clutch in the same way but they make it easier for a driver to get going again after a spin, regardless of where his hands are on the steering wheel at that time.

All other teams have actually kept a pair of clutch paddles save for Ferrari. The Maranello-based outfit only has one that occupies the whole width of the steering wheel and can be either pushed or pulled by the driver.