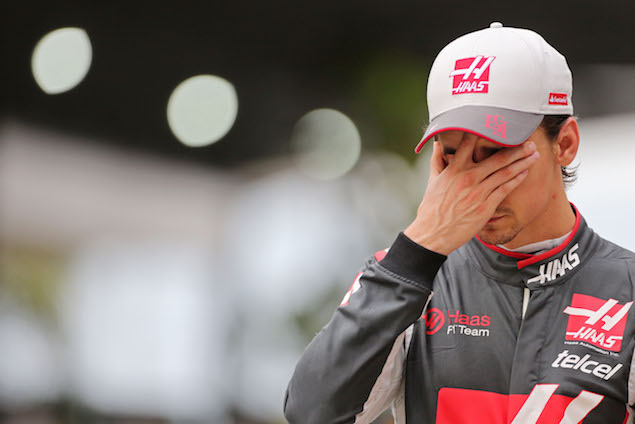 Romain Grosjean
“There was a brake failure. We really don’t know what yet, but the pedal just went straight to the floor and I had to avoid the car in front of me. Our data didn’t suggest anything beforehand. It’s a shame. We did a really good first lap and we were looking at points running inside the top-10. Things just didn’t go very well. I was racing with Fernando (Alonso). He had power, so it was very difficult to keep him behind. I was then just trying to follow his pace. The plan was to try to keep the tires alive for quite a while. We just didn’t get to that point, though.”

Esteban Gutierrez
“Today we had a fantastic start. It was pretty good up to the first corner when, unfortunately, I got a puncture in my rear-right tire from Kevin (Magnussen) touching behind. I then had to come back to the pits. The floor was damaged and when I went back out on track I was fighting a lot, pushing to make up places, but the car wasn’t easy to drive. We had to retire after my second pit stop as we had a mechanical failure. Overall, a pretty disappointing weekend, but we have to keep our focus and keep the rhythm as we head to Japan.”

Guenther Steiner, team principal
“After we saw light at the end of the tunnel yesterday after qualifying, where I think we did a pretty good job, it got dark again today. We don’t really know yet what happened with both of the cars. One had a brake failure and the other, obviously, lost a wheel. We’ll have to see what exactly failed with the brakes on Romain’s car. We lost a wheel on Esteban’s car, but we’re not sure yet why. The pit stop seemed to be ok and he got going. We need to see if a mechanical part failed or if it wasn’t tight, but we don’t know yet. Obviously, we’re moving on to Japan. We’ll try to put ourselves in a better position again there.”