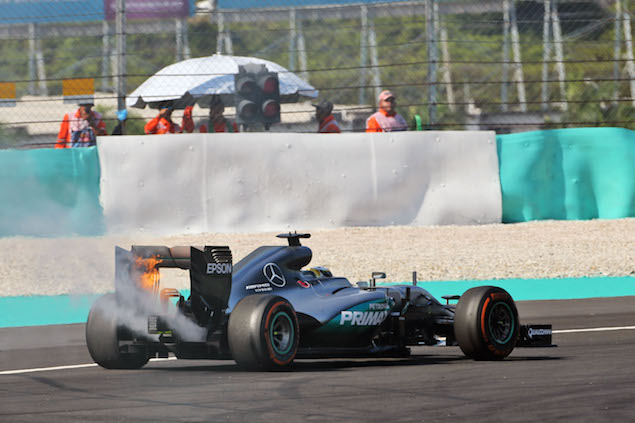 Lewis Hamilton
“Max (Verstappen) was in my pit window so I was just trying to push him out of it. I think I'd done that, almost. But then, on the straight, I just lost power all of a sudden. You could hear something blew and I obviously had to stop. Honestly, you've got to understand it from my point of view. On one side, we've had the most incredible success these past two years, for which I'm so grateful. These guys work so hard and we're all feeling the pain right now. When you get out of the car - that feeling you have after leading the race and then your car fails - it's pretty hard to say positive things at the time. As I said in the TV interviews, Mercedes have built 43 engines or however many it might be with the extra three I've had, and I have happen to have most of, if not all of, the failures. So, that is definitely tough to take. But I have 100% confidence in these guys. It's my fourth year with them now and the guys in the garage and back at the factories - I have 100% faith in them. I love it here and without them I would not have won these two Championships. While the struggle is real right now and has been all year, I honestly feel that it's a test of my will, my spirit and who I am as a person to get back in and keep fighting it head on. It's not how you fall, it's how you get back up. That applies not just to me but to the guys as well. I saw tears in the eyes of my mechanics so I know that we all bear the pain. But, as I said, it's how we re-group. We have to keep in mind what we've already built. While in the short term it doesn't look good and for the long-term this year it might not be so good, there are still lots of positives. There's still five races to go and if I can perform the way I performed this weekend there's still everything to play for. We will learn. The guys will take the engine back and they'll understand what happened. Every time we've had engine issues they've gone away and found out why. It puts us potentially in a better position to make sure it doesn't happen next year. All I can do is what I've done this weekend. Come correct, be as focused as I can possibly be, put in this kind of performance and pray that the car holds together. I still have faith and hope. That's a powerful thing. It feels a little bit like the man above, or a higher power, is intervening a little bit. But I feel like I've been blessed with the opportunity firstly to be here with so many great people around me, in this great team, to have won these last two Championships with lots and lots of victories and records that I'm breaking time and time again. Whilst it does not feel great right now, I have to be grateful for all of that. If at the end of the year the higher powers don't want me to be Champion after everything I've given towards it, I will have to accept that. As long as I end the year knowing that I've given it everything, done everything I could possibly do and that we've done everything we could possibly do, that's all you can ask for. Don't forget that I'm World Champion. I'll be okay.”

Nico Rosberg
“I came here with the will to win and that didn't work out, so I can't say that I am happy. After the first corner, it was looking pretty dark. I thought my race was over and never thought I'd be able to continue. It felt like an uncontrolled four-time World Champion torpedo had hit me! I reported to the pits that it was a pretty hard hit. I was fortunate to be able to fight through the field. But I got the knife between my teeth and went for it. I fought my way through, with some great battles along the way which I really enjoyed, and was pleased to make it back up to the podium. To be honest, I can't believe that I've just been standing up there from last! After the incident with Kimi I was surprised that I got penalized. I had to give it a go at some point and I saw the opportunity, so I went for it. You need to be creative and wherever a chance comes, take it. I thought it was an aggressive move but still okay, to be honest. That's what we race for! But I accept the decision and luckily it didn't have an influence on the result, as we had a better pace than Ferrari. I had to give it everything at the end to eke out that ten second gap but at the same time save the engine, as after Lewis' problem we were a bit hesitant to run it flat out to the end. It must have been a tough day for Lewis. I know how hard these moments are as I also went through a couple of them myself in my career, like in Abu Dhabi in 2014. It feels horrible and I'm sure he will come back strong, he is a fighter. But that brings me back to the approach of just taking things on a race-by-race basis. You just never know what's going to happen next. I'm not going to start thinking any differently. The next race is Suzuka, where I'll get back in the car and try to win again.”

Toto Wolff, head of Mercedez-Benz motorsport
“It's hard to know how to sum up a day like today. I just have no words for what happened to Lewis. We feel his pain. This is a mechanical sport, with so much technology, but sometimes you get blindsided by situations with no rational explanation. It's a freaky coincidence as to why he has suffered the majority of the engine problems this year - like the odds of throwing red six times in a row in the casino. But we take a forensic approach to our work in how we build the engines and how we analyse the failures. We always have done and we will do so again. Our guys will get to the bottom of what happened and learn from it. But I don't want to talk about forensics on a day like this - I want to focus on how Lewis responded in the aftermath. We let him down today and we are beating up ourselves about it. And you know, if you're leading the race, about to get back in the Championship lead and then your engine blows up... then every answer is allowed in front of a TV camera. It's completely understandable. But instead of venting frustration, he came back to the garage and shook the hand of every team member; we talked in a small group and we were all really down. Then he stood in front of the team and found the words to lift everybody and help us recover quickly for Japan. This is what the great drivers do, the true Champions, and I must express my respect for how he conducted himself today. For Nico, it was a great recovery drive after what happened in Turn One. You can look at the first corner two ways: he was unlucky to be hit by Sebastian but at the same time lucky the car did not sustain more damage. Then, he did a brilliant recovery drive back to third place with no mistakes. As for the penalty, I don't want it to be our focus and it didn't ultimately cost him any places. But it was a complete nonsense. We all decided that we wanted to see racing and that, if no driver was clearly at fault, then we should let them race. Then you get this. But it's for others to comment and not my main priority right now. The task is to pick ourselves back up for Suzuka. One of the greatest qualities of our group is how we come back from defeat even stronger than before. We will do that again now, in time for Japan next weekend.”
Paddy Lowe, executive director (technical)
“The word is "b*llocks", really. This is one of the more difficult races of the year and we approached the weekend knowing it would be tough to get a top result. And so it transpired. First, there was Nico's incident with Sebastian (Vettel) at the first corner, from which he was fortunate to escape without damage. The challenge then became one of helping him progress back to the front as quickly as possible. The knock-on effect on the pit wall was that losing one car from the battle for the win weakened our ability to defend against two Red Bulls, who would inevitably take a gamble on strategy with one car or the other. Although that turned out to be the case, the pace of our car was incredibly strong, with both Lewis and Nico showing impressive speed and tyre management. Lewis was well on track to secure the win when he had a terminal failure of his engine. We're all absolutely devastated for him. As a team we've worked incredibly hard to improve reliability over the past few years and have succeeded in doing so. Indeed, this was our first race failure of the year. However, one thing we had made a priority was to ensure an equal competition between the drivers in the final phase of the season, with no distortion of the battle through technical problems. Unfortunately, we have failed in that objective today in brutal fashion. Lewis came into the race on top form after his strongest weekend of the year so far. Not just in terms of his qualifying and race performance, but also in terms of the homework he'd put in with the team throughout Friday and during Saturday morning. It feels incredibly unjust that he should suffer this failure at such a moment. While we're deeply disappointed for Lewis, we take our hats off to Nico after a fantastic comeback drive, showing not only strong pace and tyre management but also great race craft. This was no more evident than in the final stint when, after a controversial incident with Kimi, he pulled out enough of a gap to maintain his podium place - despite the 10 second penalty resulting from that incident. Overall, a disappointing result from a weekend which promised so much. We will go away and analyse what happened today, aiming to arrive in Japan prepared to bounce back in the best way we can.”