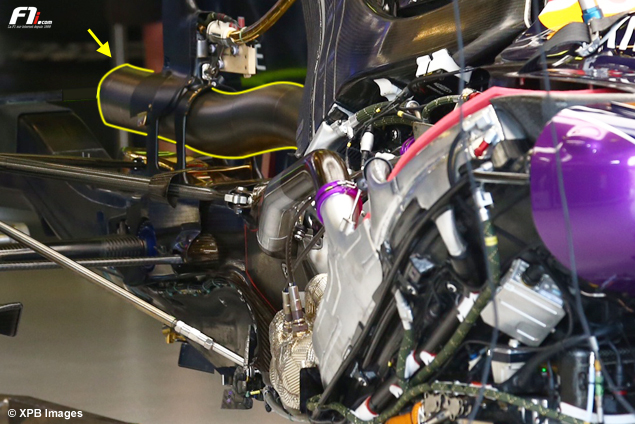 The length and diameter of the pipes, the collector angle, etc. all these elements have a critical impact on how well an engine can ‘breathe’. The very same pipe can have several different diameters in order to create shock waves that resound back and help improve charging. Taking into account fluid dynamics and vibrations in the exhaust gas column, engineers eventually come up with complex, tangled and twisted pipe designs, which are optimised to reach better turbocharger efficiency.

EXHAUSTING ALL THE TECHNICAL OPTIONS

Once the turbine has recovered energy from the exhaust gases, these are vented through a single exhaust that has been clearly defined by the FIA technical regulations. Article 5.8.2 reads that “engine exhaust systems must have only a single tailpipe exit” (instead of two prior to the season 2014), with the pipe’s diameter also being regulated.

The circular end of the tailpipe must lie “between 170mm and 185mm rearward of the rear wheel centre line” while also being located “between 350mm and 550mm above the reference plane”. What’s more, the last 150mm of any tailpipe must point upwards at a maximum angle of five degrees, with no deflector or vane allowed behind the pipe’s axis save for the ‘monkey seat’ winglet.

Only a single tailpipe exit is allowed

The idea is to prevent F1 teams from using exhaust gases for aerodynamic gains, as they used to do with their ‘Coanda’ systems before 2014. While there remains little energy on exit to be used aerodynamically, most of the squads blow gases below the ‘monkey seat’ winglet in order to generate more downforce. The governing body’s technical regulations also specify that all exhaust gases must pass thought the single tailpipe, with the wastegate diverting part of it in order to relieve the turbine wheel. 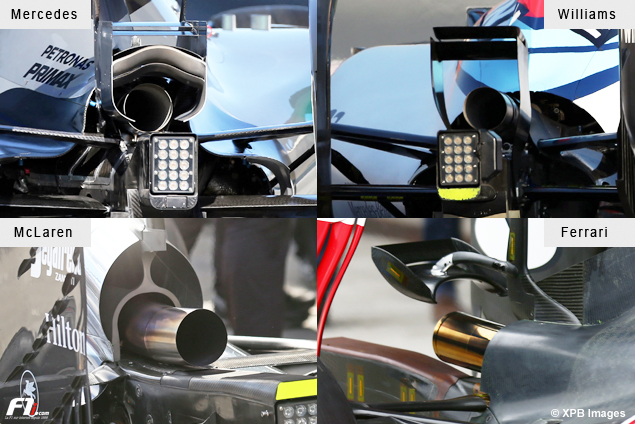 With F1 engineers always looking to save some weight on the cars, pipes are thus made of thin metal sheets. However, this solution increases heat loss, which in turn hinders the functioning of any turbocharged engine. Indeed gases contract upon cooling down, pressure then drops, and so does the turbine rotational speed eventually. This is why teams wrap up the exhaust pipes in a kind of insulating blanket (see picture) in order to maintain heat in the manifold and foster the expansion of gases.

Having to endure temperatures of nearly 1,000 degrees and cope with extreme forces, exhaust pipes are built with a specific metal alloy called Inconel, which comprises of approximately 60% Nickel and 22% Chromium, along with some Molybdenum and Niobium. Inconel is not an easy material to fine-tune though, hence the pipes being made of many small parts and the need for genuine experts to look after the whole assembling process.

Mercedes has thus followed the same design philosophy as Renault and Ferrari in terms of using a more conventional manifold, as you will see over the next pages.