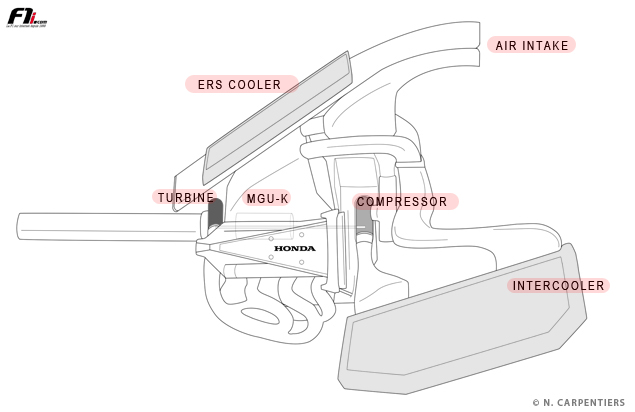 In the hot pursuit of frontrunners Mercedes, both partners had little choice but to take technical risks and sample radical design solutions. In order to give maximum freedom to aerodynamicist Peter Prodromou (Adrian Newey’s former protégé at Red Bull), McLaren imposed drastic constraints on Honda:

“Having the engine, its ancillaries and the ERS impede on the car’s aerodynamic performance was simply not an option,” said McLaren racing director Eric Boullier. “The chassis has been designed to wrap up so compactly at the rear that we had to include all elements into a tight package with nothing sticking out. In order to achieve this, Honda actually had to make several attempts and come up with three versions of the power unit because the initial two did not meet the chassis/aero technical specifications. It took them a lot of effort.”

An integral part of the ‘size zero’ philosophy, Sakura’s power unit seems to feature a split turbo design similar to the concept seen on its Mercedes counterpart. This means that the compressor has been moved away from the turbine with the MGU-H sitting in between both components (we’ll still need to see more pictures to know for certain though).

As shown on the illustration above, this split installation theoretically benefits cooling since the compressor and the associated ducts are placed in front of the engine, i.e. far from the 900°C heat released by the turbine and the red-hot exhausts. With the compressed air needing less cooling, the whole assembly enables the team to use a smaller intercooler on its unit. There’s also less pipework between the compressor and the intercooler, which in turn helps reduce the turbo lag phenomenon.

The split design solution also leaves more room for a bigger compressor. Had it been placed at the rear, the component would have had less space because of the transmission. A larger compressor generates more power but also calls for an oversized turbine, which could lead to an increase in turbo lag. Chassis engineers at Woking have installed the radiator that feeds cooling air to the ERS just above the engine by attaching the device to one of the two ducts from the air intake. This has been made with a view to clearing the car’s sidepod inlets and limiting internal airflow resistance,