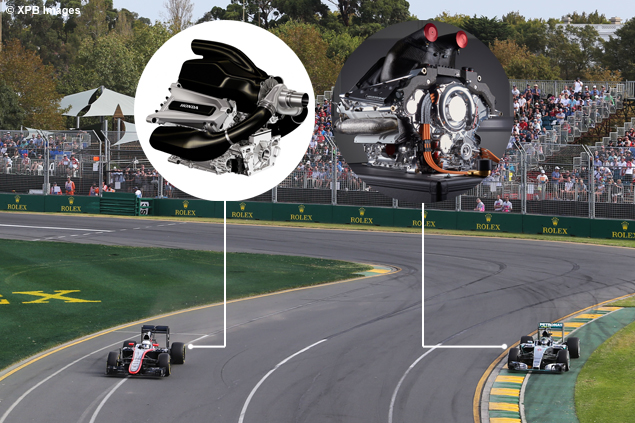 2) Was the Japanese power unit launched too late?

When asked to compare the troubled start of his Honda power plant to his Mercedes unit’s smooth beginnings last year, Jenson Button somehow diverted the question:

“The situation is very different,” said the Briton. “Mercedes had been working on its engine for many years before actually running it. On top of that, they had four teams to help develop the power unit during pre-season tests while Honda only has one. Therefore, the comparison is not valid. You’ll be able to compare us in one year.”

Honda officially announced its return to Formula One on March 2013. This means that, in theory, the Japanese manufacturer has had a whole season to monitor their rivals’ progress, gauge all the options they have trialled on track, and avoid any wrong technical calls in terms of engine design.

What’s more, Honda could rely on its future partner McLaren to have a look at the current benchmark, i.e. the Mercedes PU106A that powered last year’s MP4-29. Although its engineers could study that power unit, they were not able to actually work on it. “McLaren only had restricted access to the data from its 2014 V6 engine because any power unit remains the property of the supplier, who just rents its products”, explains F1i technical contributor and former F1 engineer Jacky Eeckelaert. By merely analysing the Mercedes power plant, Honda could only see how all its components sit. But the true complexity of these hybrid units comes from their software and control electronics, which basically ensure that all the PU internals are functioning together properly.

On the other hand, it is believed that Mercedes started testing on single cylinders back in 2010, a long time before the final version of the 1.6L V6 power unit regulations was rubber-stamped.

“Mercedes has been developing its engine for more than three years whereas Honda only began 18 months ago,” details Boullier. “This can already explains many things. As for Ferrari and Renault, I don’t have the answers (to explain the gap).”

Granted, Mercedes currently races in a league of its own, however, Honda remains behind Renault and Ferrari’s 2014 split times during their maiden seasons with the new technology.