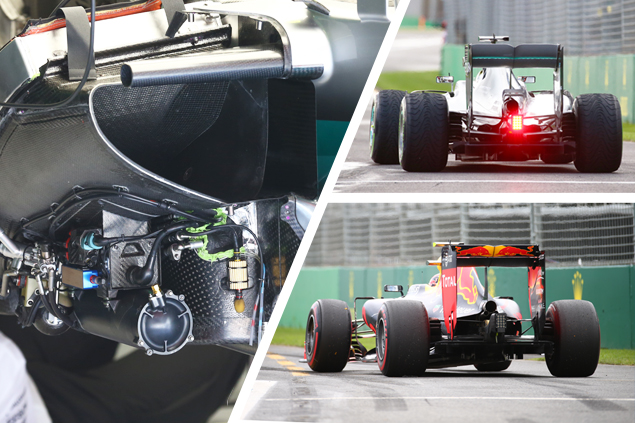 ANOTHER WAY TO RECOVER ENERGY

One excerpt in the Ferrari letter has shed a new light on how the passive, albeit extremely sophisticated, Mercedes system operates. The Maranello engineers have cast doubts over parts that could act as “a means by which some of the energy recovered from the forces and displacements at the wheel can be stored for release at a later time to extend a spring seat or other parts of the suspension assembly whose movement is not defined by the principally vertical suspension travel of the two wheels.”

Mercedes and Red Bull would use the movement of the suspension to generate hydraulic pressure that would be stored and released at the appropriate time, thus working in a manner similar to a battery. This underlines that energy recovery goes beyond the power unit…

The energy generated by shock absorption would be harvested, stored (perhaps in the cylinder placed in the right sidepod of the W07), before it is used later to act on the heave spring, for instance in a bid to offset the compression effect that is triggered under braking or by an increase in aero load.

Another goal could be to modify the car’s rake angle when traveling at high speed in a straight line. Hughes’ theory is that this is how Red Bull uses the system. With the machine running almost flat and the rear wing’s angle of attack curbed, there would be a reduction in drag, which would make up for engine partner Renault’s lack of horsepower.

With energy storage only possible through hydraulic actuation, Mercedes’ heave spring unit is entirely hydraulic (spring and inerter), whereas it includes a mechanical part on other cars.

In Hungary last year, the German manufacturer sampled a new, downsized front heave element but kept it away from prying eyes by hiding it with a carbon cover. At Red Bull, one could catch a glimpse of the inerter, but not when the element was being set up as mechanics always made sure to block the view.

Furthermore, the system would feature a moveable spring seat, which would “be likely to contravene Article 3.15 of the F1 technical regulations”, per Whiting in his reply to Ferrari. 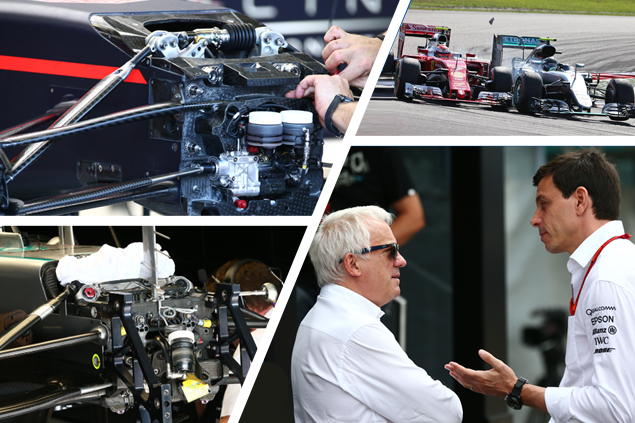