Power and straight-line speed are precious assets at the Circuit Gilles Villeneuve in Montreal, but when the weather throws a spanner in the works, maximum velocity is a secondary concern.

Qualifying took place in wet conditions on Saturday, and we're only positing the speed trap readings here as a matter of habit, as the numbers themselves are relatively irrelevant given the conditions that prevailed in the session.

Williams' cars led the charge down the straight that leads back to the track's final chicane, an indication of the inconsequential impact of a car's top speed in the wet as Alex Albon qualified P12 while teammate Nicholas Latifi was a lowly P19 in the session. 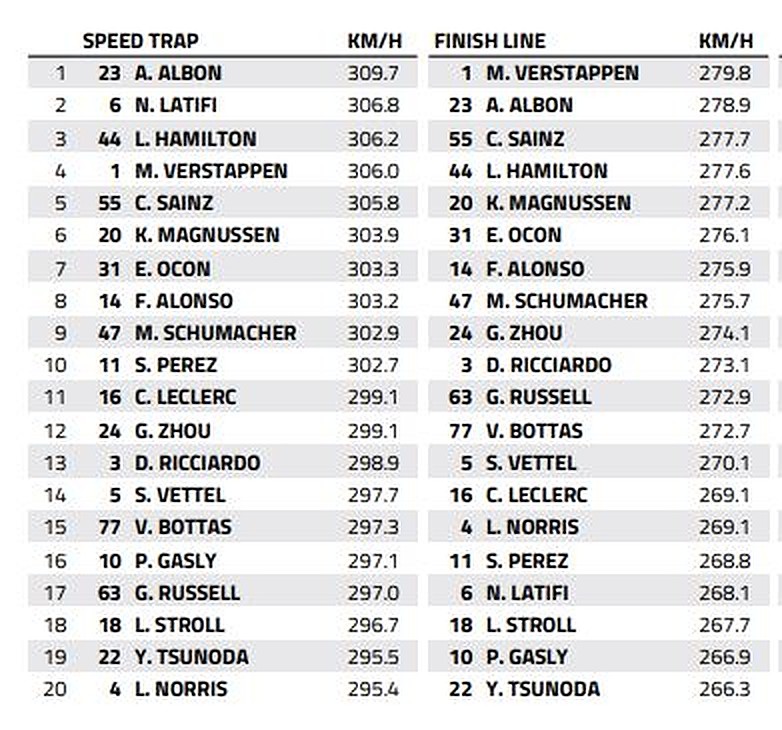 Lewis Hamilton was the third fastest driver through the speed trap, which contributed to his fourth quickest time in qualifying, his best Saturday afternoon performance with Mercedes so far this year.

Forecasts are calling for a dry race on Sunday which would bring back into play a car's low-downforce set-up around the 4.361km layout where overtaking is fairly easy.

But as usual, the factor that could make or break a driver's afternoon in Montreal is tyre strategy.

Pirelli has assigned to teams the softest compounds in its range, but F1's three-year absence from Montreal poses a number of questions.

"All previous data is three years old, and we have a completely different range of tyres with new compounds and structures, on a track that is hardly ever used – which will lead to a very high degree of evolution," commented Pirelli F1 boss Mario Isola.

Finally, another parameter that could open up the race in terms of strategy is the fact that Montreal has one of the lowest pit lane time loss penalties on the calendar, meaning that a car can be in and out of the pit lane in less than 20 seconds!