After a cagey start to pre-season testing at the Circuit de Barcelona-Catalunya last week, the second batch of four days has started to offer up some real data and insight into how things stand heading to Melbourne.

The analysis is helped by the weather staying remarkably fine and consistent - such a change on the snow and ice of 2018 - meaning we get a proper picture of how teams are improving in readiness to the first Grand Prix in just two weeks time.

In terms of pace we already know that Ferrari appear to have the edge over Mercedes and the rest of the field, with all of this week's drivers setting their best times on the C5 compound in the final two days with the exception of Max Verstappen who unfortunately never had the opportunity. 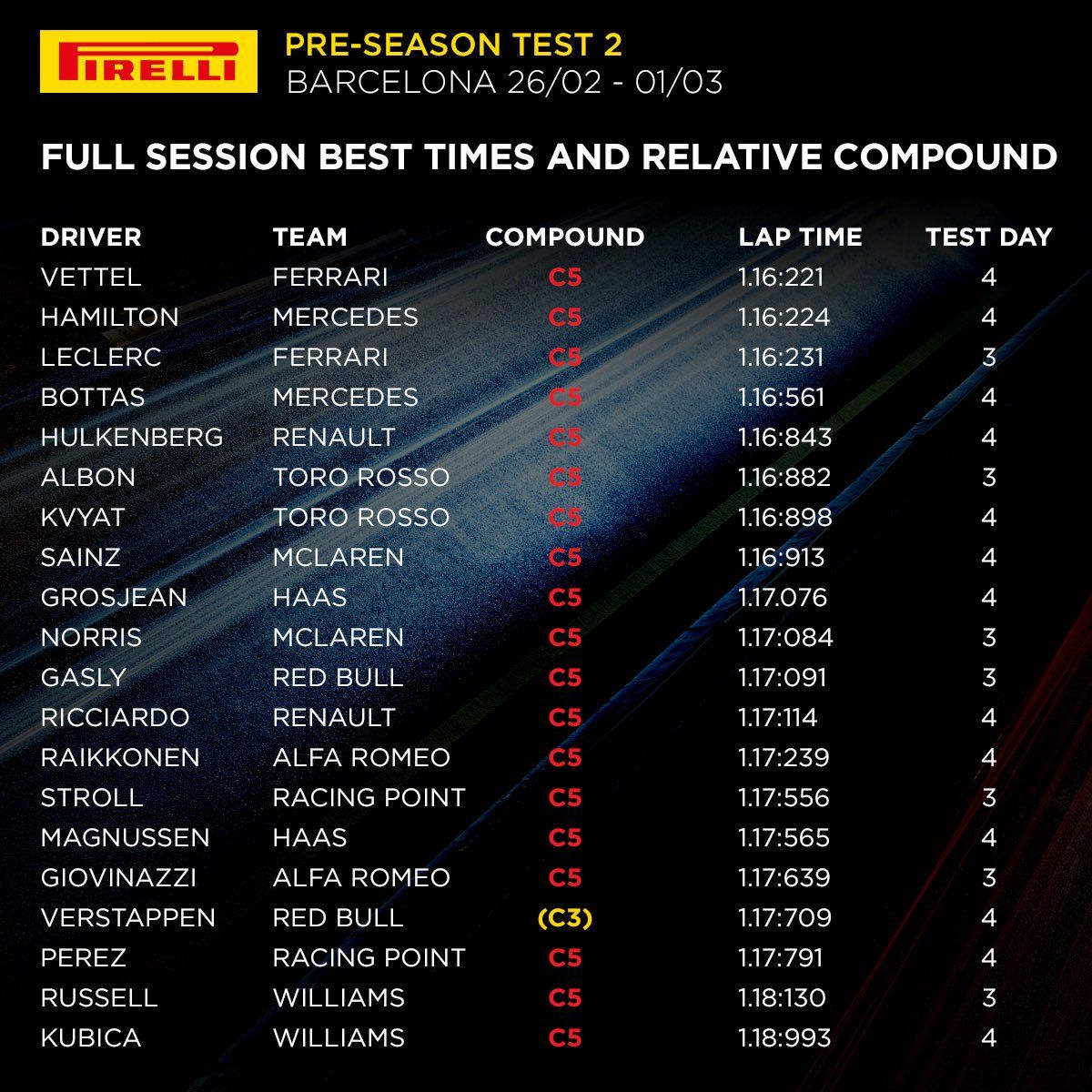 But speed is only half the story, and Ferrari has also had a few issues along the way that ate into their track time. The same was true of Red Bull, who lost almost all of the last day of running to gearbox issues, following Pierre Gasly's accident earlier in the week.

So it probably won't be a surprise that with another largely consistent and trouble-free run for the second week in Spain, it's Mercedes who come out on top in terms of completed mileage. Hamilton completed 331 laps during the four days and his team mate Valtteri Bottas contributed another 249. That compares to 231 laps for Vettel and 168 for Charles Leclerc.

In total, Mercedes racked up an impressive 1190 laps over the full eight days of testing, which is nearly 200 more than Ferrari who just missed out on the millennium milestone with 997 laps. Renault, Toro Rosso and Alfa Romeo also put in solid performances with Nico Hulkenberg, Alexander Albon and Kimi Raikkonen respectively putting in the miles.

McLaren were slightly further back with 873 laps with Carlos Sainz accumulating 473 of those compared to a solid 400 for Lando Norris. The team's total was just two more than Haas where Romain Grosjean and Kevin Magnussen finished on pretty even mileage (407 laps to 403) together with a further 61 contributed by the team's test driver Pietro Fittipaldi.

McLaren and Haas are both well ahead of Red Bull, whose full test tally stalled at 833 laps because of the problems they encountered in the last couple of days. After that you have the two teams teams looking in some trouble, with Racing Point managing just 625 laps in Spain because of a host of teething issues. Sergio Perez only managed 289 laps during the two weeks (and Lance Stroll did 336) which must be a bit of a concern for the squad.

Given that they missed the first two and a half days of the test, it's surely not a surprise to see Williams at the bottom of the mileage table. But for all their high profile problems, the team managed to finish with 567 laps in the bag which really isn't all that far behind Racing Point, so perhaps there's a glimmer of hope at Grove for what the team can achieve in 2019.

Another way of slicing the data is to look at how the different engine manufacturers fared. As well as their championship winning factory team, Mercedes also supplies power units to Force India and Williams and so their combined mileage for the two week test turns out to be not quite so impressive - 2382 laps.

By comparison, Ferrari - who additionally supply Haas and Alfa Romeo as well as the works team itself - shine with a combined total of 2790 laps for their engines in Spain.

The other two manufacturers are down a team apiece, with Renault supplying just McLaren as a customer operation and Honda now working with Red Bull and Toro Rosso, so it's no surprise that in each case their total mileage is somewhat lower. The French manufacturer's teams managed 1834 laps over the two weeks with Honda a little further back, with a still-respectable 1768 for the eight days.

Frustrated Kubica: Williams car 'not representative to what it should be'