Lewis Hamilton secured a comfortable win in the 2020 Styrian Grand Prix, with his team mate Valtteri Bottas overcoming Max Verstappen in the closing laps to make it a Mercedes 1-2.

Verstappen's Red Bull team mate Alexander Albon picked up fourth place ahead of McLaren's Lando Norris who for the second week in succession pulled off a sensational final two laps to finish ahead of Racing Point pair Sergio Perez and Lance Stroll.

But it was a disastrous afternoon for Ferrari, with the team's two drivers Sebastian Vettel and Charles Leclerc clashing on the first lap sending both cars into retirement.

What a difference a day makes in the hills of the Steiermark: just 24 hours after practice and qualifying had been disrupted by torrential rain, the Red Bull Ring was fully restored back to its former dry, bright and warm self in plenty of time for the start of the second race in Spielberg in a week. 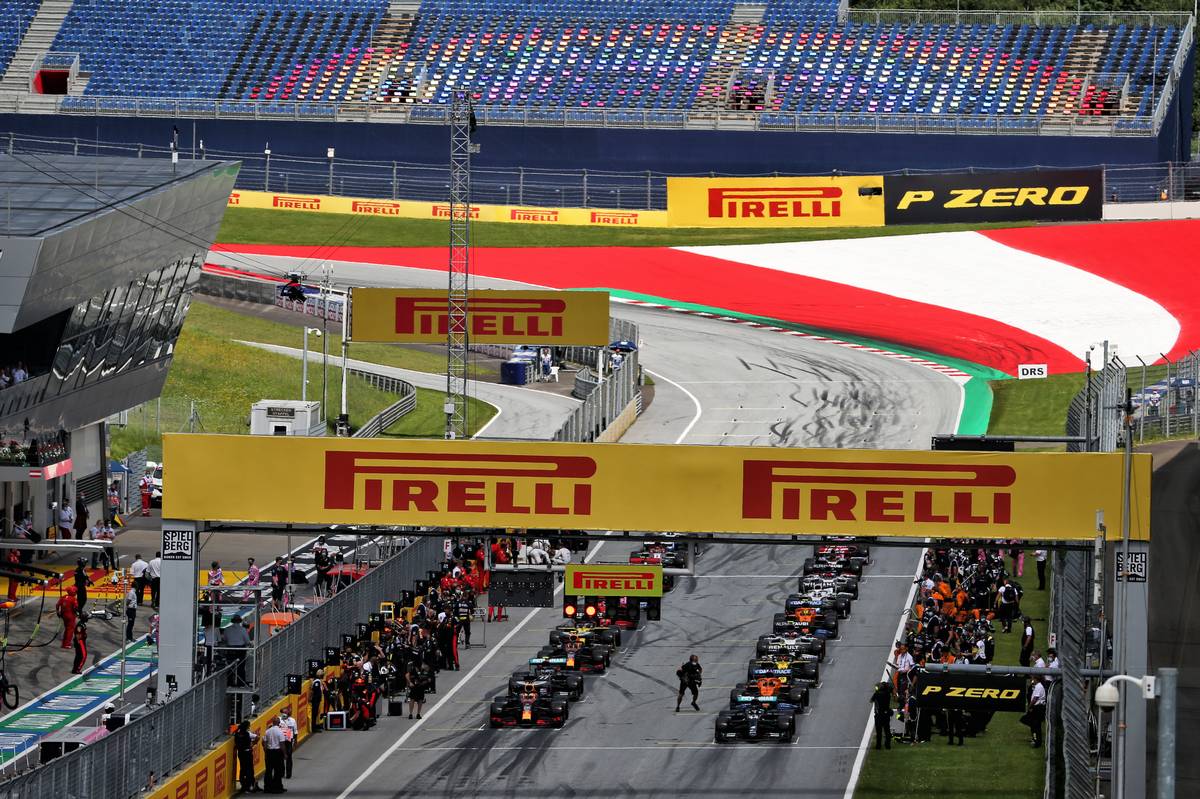 Lewis Hamilton's mastery of the wet conditions on Saturday had put his Mercedes on pole position, with Red Bull's Max Verstappen once again on the front row alongside him. Third place on the grid was occupied by a McLaren, but this time it was Carlos Sainz who was lined up next to Valtteri Bottas as the lights went out for the start of the second round of the 2020 world championship.

Hamilton got a clean start, with Verstappen having little chance of fighting for the lead into turn 1. Instead he found himself busy fending off Sainz, while Bottas maintained fourth position in the hopes of picking up the pieces should the pair collide. Alexander Albon confirmed his hold on fifth ahead of the two Renaults of Esteban Ocon and Daniel Ricciardo, with the top ten completed by Pierre Gasly, Lando Norris and Lance Stroll.

Further back there was disaster for Ferrari, with both Sebastian Vettel and Charles Leclerc getting caught up in a tight squeeze into turn 3 and making contact, Vettel receiving a hit from the rear which completely demolished his rear wing. "I didn't think there was any space," said Vettel, adding: "I didn't expect Charles to try something." Both drivers headed for pit lane, Leclerc for a new front wing and a change of tyres while Vettel was straight into retirement due to the extent of the damage on the SF1000. Moments later he was joined there by Leclerc, after the damage to his own car also proved too significant to continue or to repair. 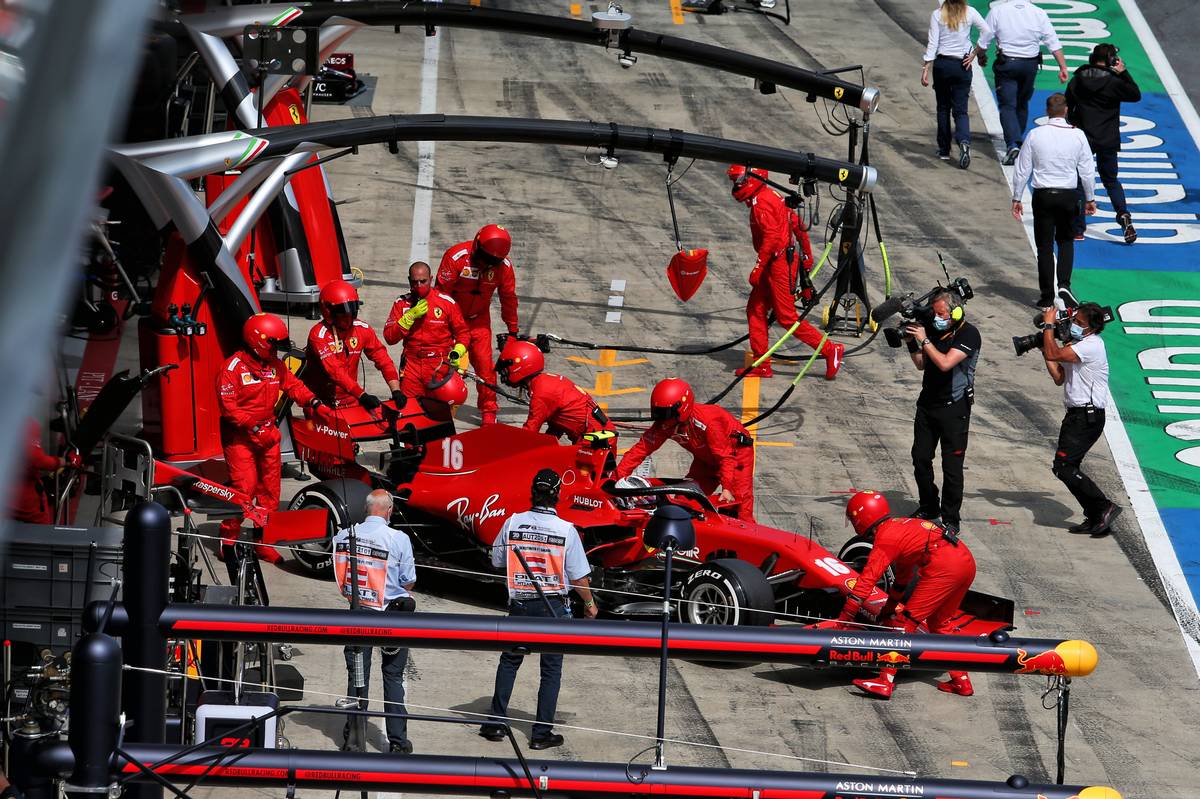 The incident caused a brief safety car. Hamilton had no trouble acing the restart leaving Verstappen firmly in second, while Bottas was soon able to dispense with Sainz for third place on lap 6. Albon also found his way past the McLaren soon after with the aid of DRS. Further back, Russell was vying to get into the top ten only to end up losing the car and running wide, dropping him all the way to the back of the field and dashing all hopes of winning points after his stellar performance in qualifying.

Norris was also struggling for pace in the opening laps, losing out to Stroll which put him in the middle of a Racing Point sandwich as Sergio Perez sought to recover from a disappointing time on Saturday. The situation didn't last long, with Perez forcing his way past on lap 16 to demote Norris from a points-paying position where he found himself under pressure from AlphaTauri's Daniil Kvyat.

By lap 20, Hamilton's lead over Verstappen was up to nearly four seconds, with Bottas a further three seconds behind and then a big gap back to Albon and Sainz, with Ricciardo finally picking up sixth place from his team mate Ocon. The progress of the 'Pink Merc' continued apace with both Stroll and Perez having found their way past Gasly. Behind Kvyat, the remaining cars were flying in two-by-two formation: the Alfa Romeos of Antonio Giovinazzi and Kimi Raikkonen in 13th and 14th respectively, then the two Haas drivers (Kevin Magnussen followed by Romain Grosjean who had started from pit lane) and finally the pair of Williams cars with Nicholas Latifi now leading George Russell. 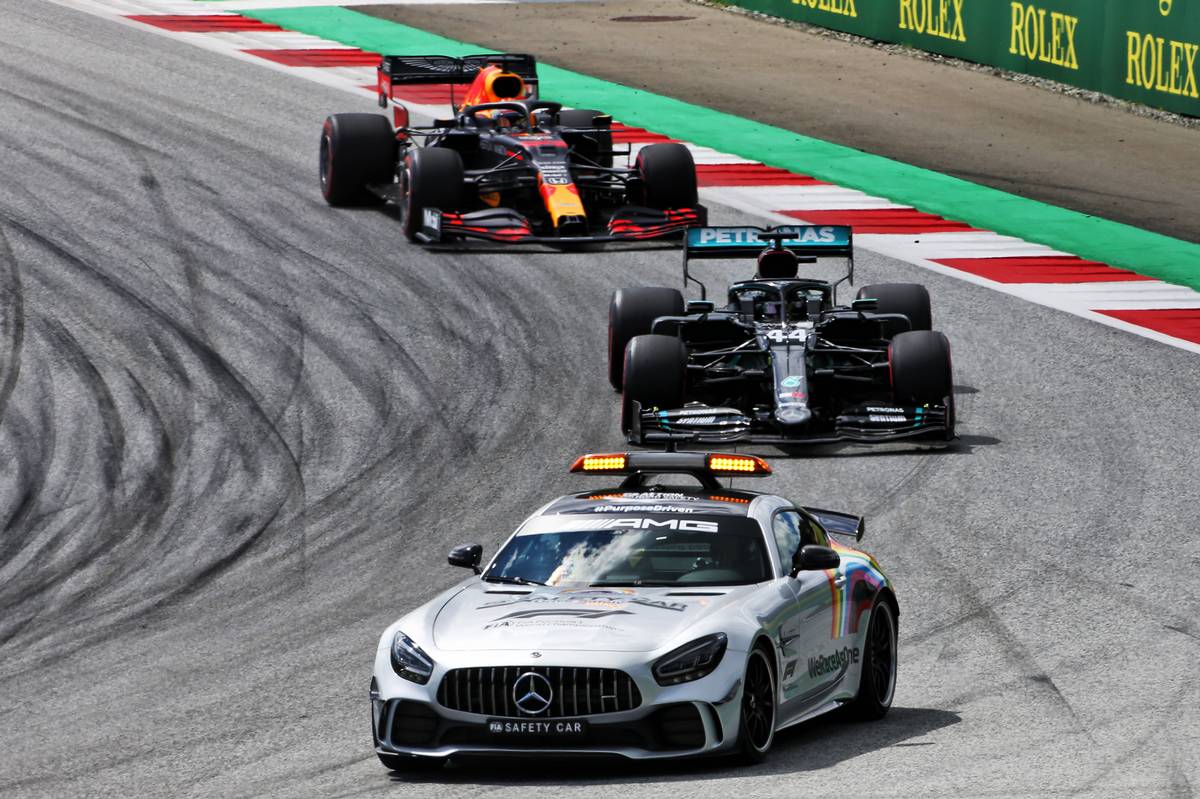 Still stuck in second, Verstappen sought a strategic advantage by being the first of the leaders to pit at the end of lap 24 to trade his starting set of softs for a new batch of medium compound tyres. Gasly was also in soon after, but Ocon's visit to pit lane moments later was for a very different reason as the R.S.20 was backed into the garage with smoke billowing from its front brakes. A cooling issue was the stated cause of the retirement.

Mercedes finally reacted at the end of lap 27 by calling Hamilton in for service, temporarily handing the lead to Bottas. Hamilton slotted back in second, still with a five second advantage over Verstappen who was growing increasingly frustrated and snapping questions at the Red Bull pit wall about what the idea had been with the early stop. Bottas finally pitted on lap 34 and exited back in third place some way behind the Dutchman, while Albon was in on lap 35: both were textbook pit stops, unlike the problematic service Sainz received from McLaren in which a painful delay changing the right rear tyre dropped the Spaniard out of the top ten. Norris fared somewhat better when he dived in from P4 on lap 41 and came back out just behind his team mate and Kimi Raikkonen, the Finn the last driver to pit a few moments later.

Pit stops complete, the top positions appeared firmly set with Hamilton's lead over Verstappen holding at five seconds, and Bottas dropping back slightly as he dealt with lapped traffic. Even so, his advantage over Albon in fourth place was up to half a minute, while Albon had problems of his own with Perez growing rapidly in his rear mirrors. The Mexican had come out on top following a lively joust with his team mate Stroll and then blasting past a seemingly under-par Ricciardo, although the Australian was still wily enough to prevent Stroll from overtaking him. 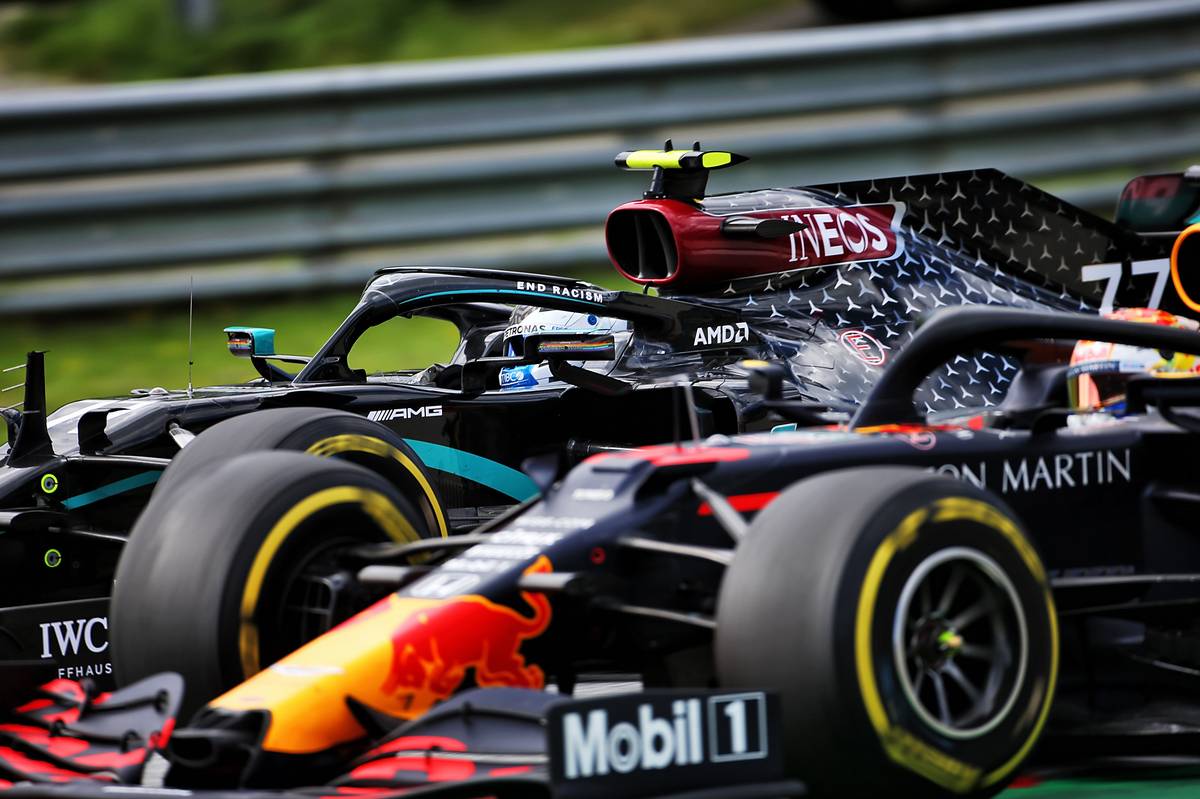 With ten laps to go, Hamilton started to open up the gap at the front while Verstappen was falling backwards into the clutches of Bottas, apparently in part as a result of flapping front-wing footplate damage on the RB16. The Mercedes pit wall was encouraging their man to push, predicting that there would be a chance to snatch second place in the last couple of laps. In fact the first opportunity came in the run down to turn 4 on lap 66, but Verstappen dug in and thwarted the pass. Next time round he wasn't so successful, and Bottas secured the pass and with it second place on the podium.

Further back, Albon was battling to hold off driver of the day Perez and keep hold of fourth. The pair clashed on the penultimate lap, leaving the Racing Point with front wing damage. Behind them a spectacular battle had broken out with Stroll finally managing to get round the ailing Ricciardo at turn 3 on the last but one lap, which allowed Norris to follow his way through and pull off a final banzai attack on Stroll. Norris then set his sights on the Canadian's wounded team mate, and with seconds to spare before the chequered flag he managed to pass Perez and successfully snatch fifth place. Not quite as good as last week's maiden podium, but a sensational end to his day nonetheless.

Perez just managed to cling on to sixth ahead of Stroll with Ricciardo crossing the line just in front of Sainz and Kvyat. Missing out on the top ten this week were Raikkonen, Magnussen, Grosjean, Giovinazzi and Gasly, while Russell finished ahead of Latifi in an unwelcome return to the bottom of the timesheets for Williams, with both cars two laps off the lead. There were three retirements in total, with Ocon having joined Leclerc and Vettel on the sidelines. 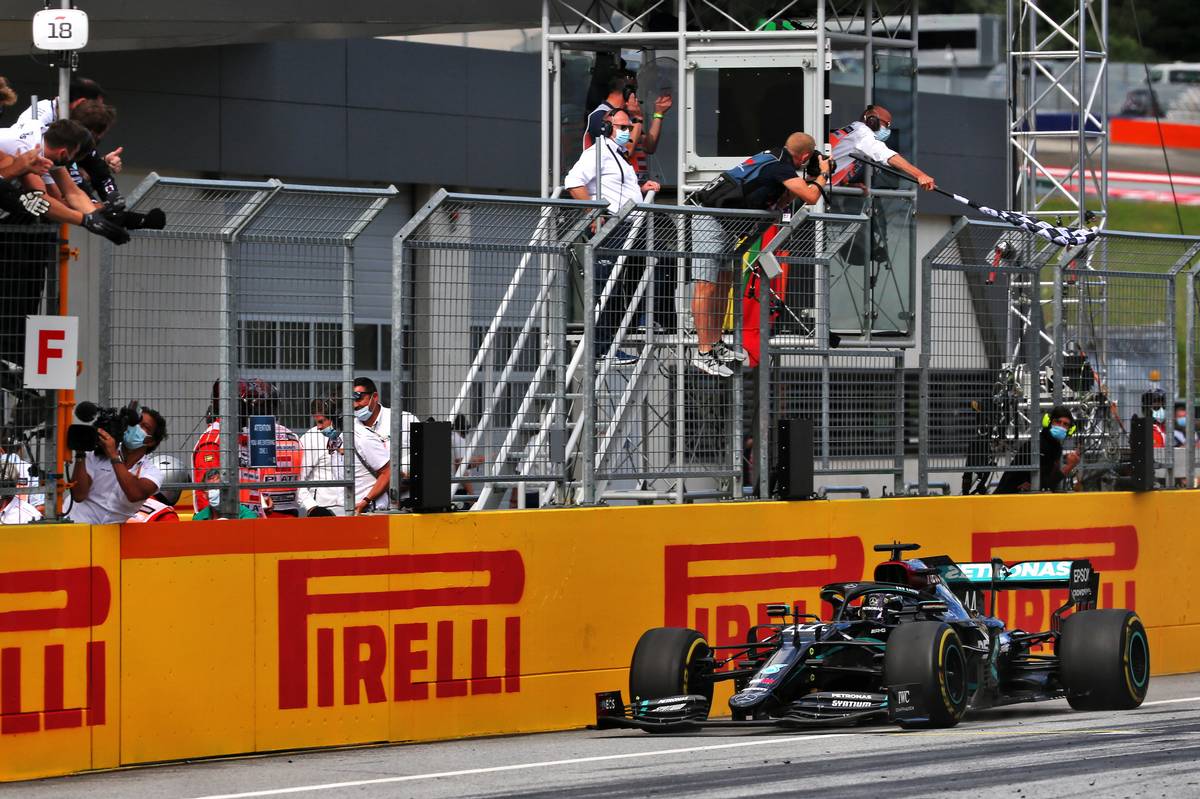