A Formula 1 simulator is often viewed as a sophisticated and advanced video game, but nothing could be further from the truth. Its purpose goes well beyond its minor role of helping a driver’s progress or learning of a track. In fact, its main intent is to critically contribute to a car’s development as F1i’s Nicolas Carpentiers found out during his recent visit to Enstone. Here is the third installment of our feature on what goes on behind Enstone's closed doors.

After discovering which way the wind blows inside Renault’s windtunnel and prowling the open floor of its immaculate design office, we found our way to the simulator room where one Daniel Ricciardo will likely be spending a lot of time before the start of the season.

While Renault’s 2019 chassis is still in the process of being built, its digital doppelgänger already exists, thanks to a team led by Ben Morgan, our helpful guide to the simulator’s inner workings.

Despite his youthful demeanour, Morgan’s enjoys a vast experience of simulation with previous stints at McLaren and Ferrari before he settled at Enstone.

“It looks like kind of a glorified computer game, but what we found is if somebody tries to drive and is not a racing driver but is familiar with computer games, he tends to struggle quite a lot, whereas if you bring a racing driver who has never driven a computer game he is usually quick and comfortable,” Ben Morgan explains right off the bat.

“It takes the same skills-set to be fast in the simulator as it does to drive the real car fast. It just shows that it is more than a game but it is representing the dynamics and the behaviour of a real car.” 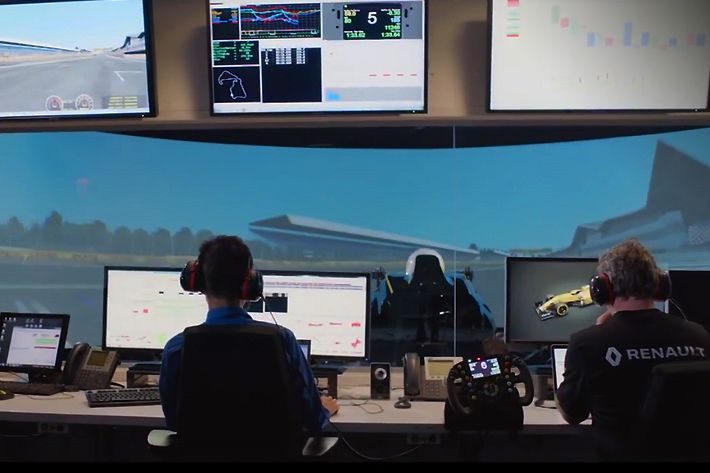 The facility at Enstone was commissioned in 2011 with the model of the car designed by the team and the circuit maps provided by R Factor Pro.

Renault’s driver-in-the-loop simulator features five high definition projectors and the steering motor gives realistic feedback and representation of the forces generated by the tyres. The telemetry is accurate to what is seen at the track and gives drivers and engineers useful data in preparation for a race.

“The purpose of the driver in the loop simulator is mainly to develop and assess new parts that are coming through, so we know where to put our efforts”, explains Renault F1 junior Jack Aitken.

“We have simulations that do some of this, but at the end of the day we can’t replicate a real driver trying it, and that’s where we come in with the simulator.

“I spend my time running through new parts, set- up changes, and ways to make the simulator ever more realistic and closer to the real thing. It’s hard work looking at a screen all day and having to be extremely consistent, but it’s very important for the team.”