Over 13,000 Formula 1 fans cast their vote for their favourite race of 2019, with this year's frantic German Grand Prix topping the results.

Max Verstappen conquered his seventh career win at Hockenheim, the Red Bull charger avoiding the pitfalls and traps set up by the elements on that thrilling and wet Sunday afternoon.

Despite a 360 degree spin, it took the Dutchman the better part of 30 laps to put himself in charge, helped by a mishap by Lewis Hamilton who crashed on lap 29 and then received a penalty for entering the pitlane on the wrong side of a safety bollard.

Sebastian Vettel, who had started last after failing to set a time in qualifying, stormed through the field to secure a brilliant runner-up spot behind Verstappen while third-placed man Daniil Kvyat delivered to Toro Rosso its second podium of its history.

The Brazilian Grand Prix - another Verstappen triumph and podium for Toro Rosso - was unsurprisingly voted the second best race of the season by the fan community.

The Italian and Austrian Grands Prix - won respectively by Leclerc and the ever-present Verstappen - received an equal number of votes to complete the top four races of 2019.

Video: Hamilton and Rossi's onboard hot laps at Valencia 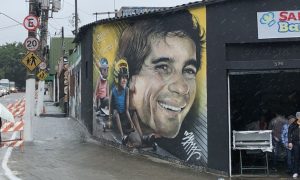