Mercedes engine boss Andy Cowell admits that Ferrari's power unit gained an edge over its rivals in 2019, at least in terms of sheer output.

Ferrari's overall SF90-H package suffered this year from a lack of downforce relative to its Mercedes and Red Bull counterparts, a weakness that ultimately prevented Charles Leclerc and Sebastian Vettel from challenging for the world title.

However, thanks to engine gains achieved in the second part of the season, there's no question that the Scuderia's charger had the upper hand in qualifying trim, says Cowell.

"In terms of out-and-out qualifying performance, Ferrari this year have shown that their car is better, but you don't get points on a Saturday, you get points on a Sunday in terms of finishing the race," said the managing director of Mercedes HPP unit in Brixworth, speaking on a Motorsport Magazine podcast.

Asked whether the specific architecture of the Mercedes power unit and its limited potential for development was a drawback relative to Ferrari, Cowell said:

"We work very hard with the team at Brackley to make sure the power unit contributes to the overall car performance.

"I don't think the architecture Is holding us back. Every year we have a very open look at the way the power unit should be laid out.

"A lot of it is determined by the regulations in terms of where you can put the turbocharger - towards the front, sort of split across the crankcase like we have it, or in the back in the transmission.

"Typically, from an aerodynamic perspective you want to follow the shadow of the drivers' helmet and the crash structures as around that. 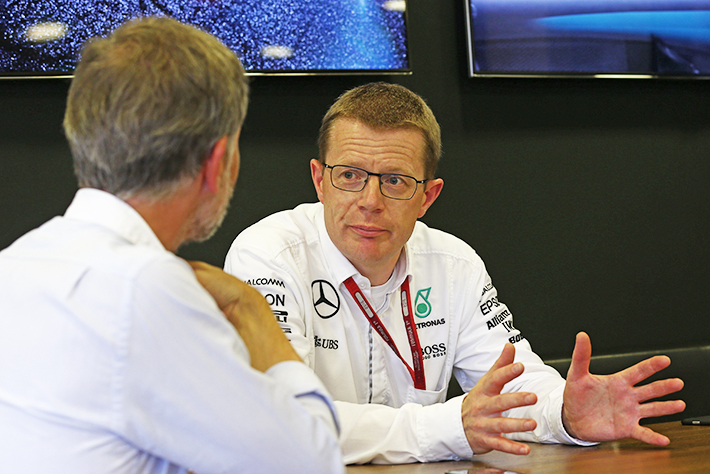 While extracting more power is a never ending quest, Cowell underscored the importance of putting on the track on Sunday the best possible overall package.

"What we mustn't do is destroy the performance of the car on race day," he added.

"The aerodynamicists and the vehicle dynamics guys have done a great job of making sure that the car is very kind to its tyres and can stretch well and can be raced hard.

"And the total car package in terms of reliability is a key aspect as well, as well as the tactics of the race and the management of the drivers."

Corinna Schumacher hints at husband's progress in message of hope