Lewis Hamilton and Max Verstappen will go into the final race of 2021 dead level in the points standings, after one of the most tumultuous and dramatic Grand Prix races of recent years.

An early red flag stoppage in the Saudi Arabian GP allowed Verstappen to cut turn 1 to take the lead from pole sitter Hamilton. He had to give the place back, only for a second restart attempt saw him fly to the front again, setting up what proved to be a supremely pitched and bad-tempered duel for the rest of the night.

Verstappen once again cut turn 1 trying to protect his lead and this time the Red Bull was handed a five second time penalty by race control which allowed Hamilton to take victory and fastest lap, with his Mercedes team mate Valtteri Bottas pulling off a last lap pass on Esteban Ocon to claim third. 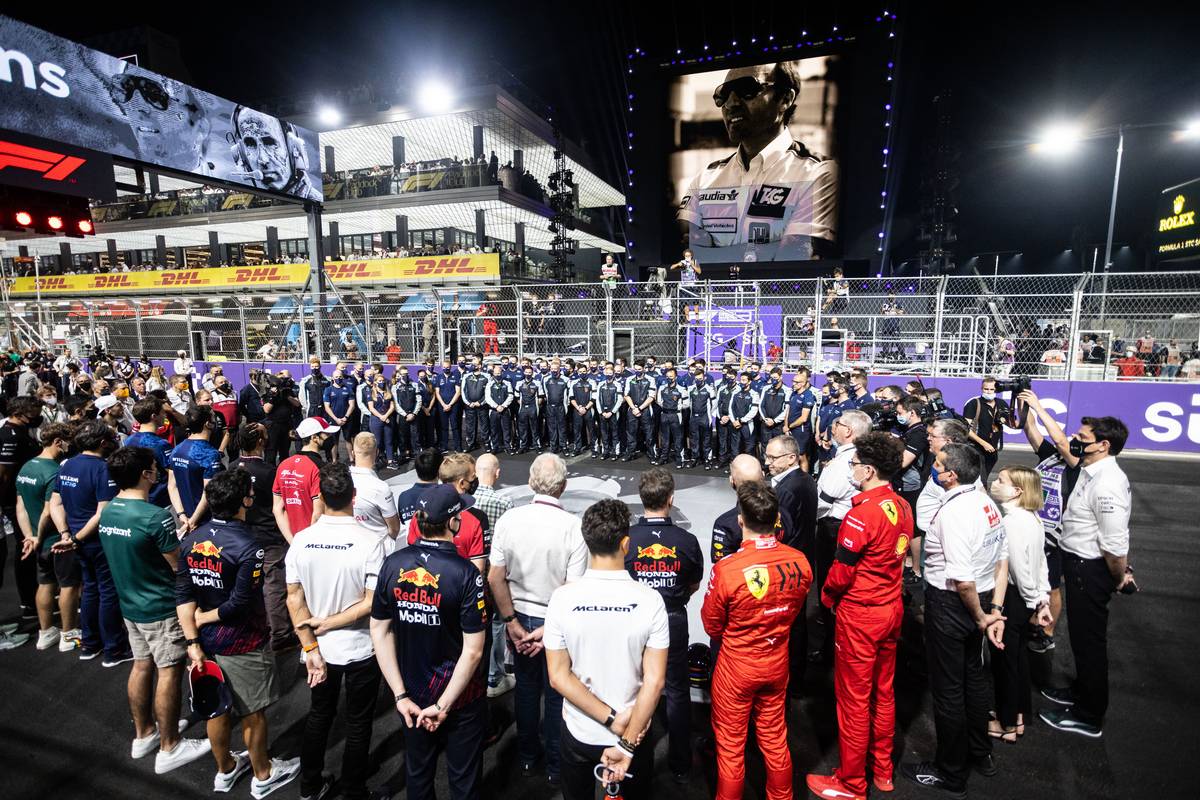 The sun had set over the Jeddah Corniche Circuit and the floodlit stage was ready for the penultimate round of the 2021 world championship. Even in the darkness of night it was warm and oppressively humid as the drivers and teams assembled on the track for the traditional pre-race ceremonies, which on this occasion included a moment's silence in memory of Sir frank Williams who had passed away just a few days earlier.

Once the formalities were complete, the cars headed to the grid on their formation lap led by the two Mercedes drivers, Lewis Hamilton on pole followed by his team mate Valtteri Bottas. Max Verstappen was close behind in third place in his rebuilt Red Bull after his dramatic shunt at the end of qualifying 24 hours earlier. Fortunately he had escaped the need for a new gearbox meaning there were no penalties compromising the start of his race, on the day when it was possible he could end up being crowned world champion for the first time.

When the start lights went out, Hamilton and Bottas executed a perfect start while Verstappen initially struggled to find pace leaving him under pressure from Ferrari's Charles Leclerc. Surprised by the slower than expected start from Verstappen, Sergio Perez braked late and almost ended up going into the back of his team leader, but once through the first turn the leaders emerged with the order unchanged from the way they had lined up on the grid, with Yuki Tsunoda the biggest loser as the AlphaTauri lost four places and tumbled out of the top ten. 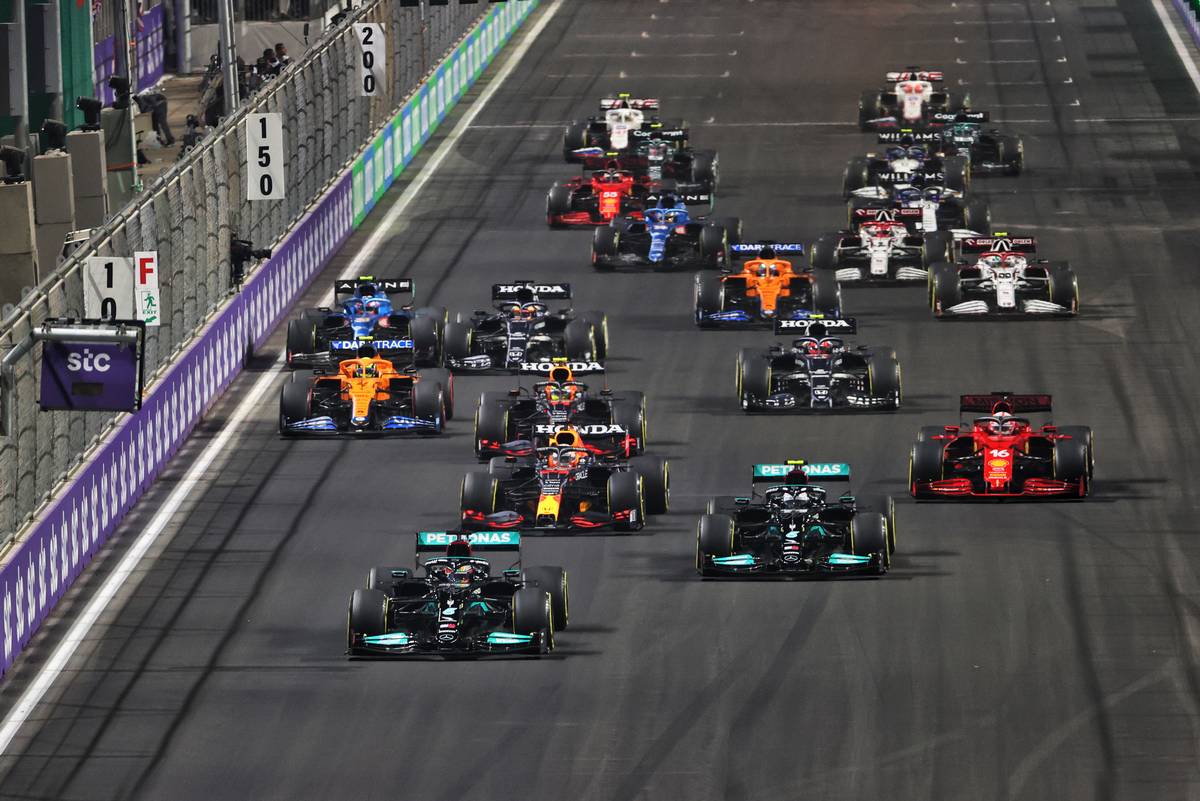 Six laps in, Hamilton was maintaining a 1.7s lead over Bottas with Verstappen holding station a similar distance behind the Finn. They were already pulling away from Leclerc and Perez, with Lando Norris in sixth as the highest driver to start on the soft compound tyres allowing him to keep ahead of Esteban Ocon and Pierre Gasly. Norris' team mate Daniel Ricciardo had also gone for a contrary tyre strategy, in this case the hard compound, suggesting a long first stint to keep him ahead of Fernando Alonso. The Alpine driver was making uncharacteristic errors and ran wide, losing tenth to Alfa Romeo's Antonio Giovinazzi on lap 7 which left him in the cross hairs of Ferrari's Carlos Sainz.

Hamilton had teased his lead out to over four seconds by the time the safety car was scrambled on lap 10 for Mick Schumacher crashing at turn 23, in a virtual replay of Leclerc's accident at the end of Friday's second practice. Mercedes reacted immediately by pitting Hamilton and Bottas from the lead for hard tyres with Leclerc and Perez following suit and Norris also taking the chance to discard his first set of softs. The notable exception - other than the Alfa Romeos and those who had started on the hard tyres in the first place - was Verstappen, who opted to stay out and pick up the lead of the rise. However he wasn't happy by the way Bottas had slowed on his in-lap to help Hamilton, nor with the slow speed of the safety car.

Verstappen's huge gamble in staying out was sensationally rewarded when race control directed an 18-minute red flag to allow for a barrier safety check, which enabled Red Bull to make the deferred tyre change during the ensuing stoppage - much to Hamilton's intense frustration, as it meant Verstappen now legitimately had control of the race for the standing restart to get the remaining 36 laps underway. Hamilton was also quick to point out a cheeky (and arguably illegal) pit lane practice start by his rival, while Verstappen responded by complaining Hamilton wasn't staying close enough on the formation lap, leaving the Red Bull killing time on the grid with its tyres cooling by the minute. 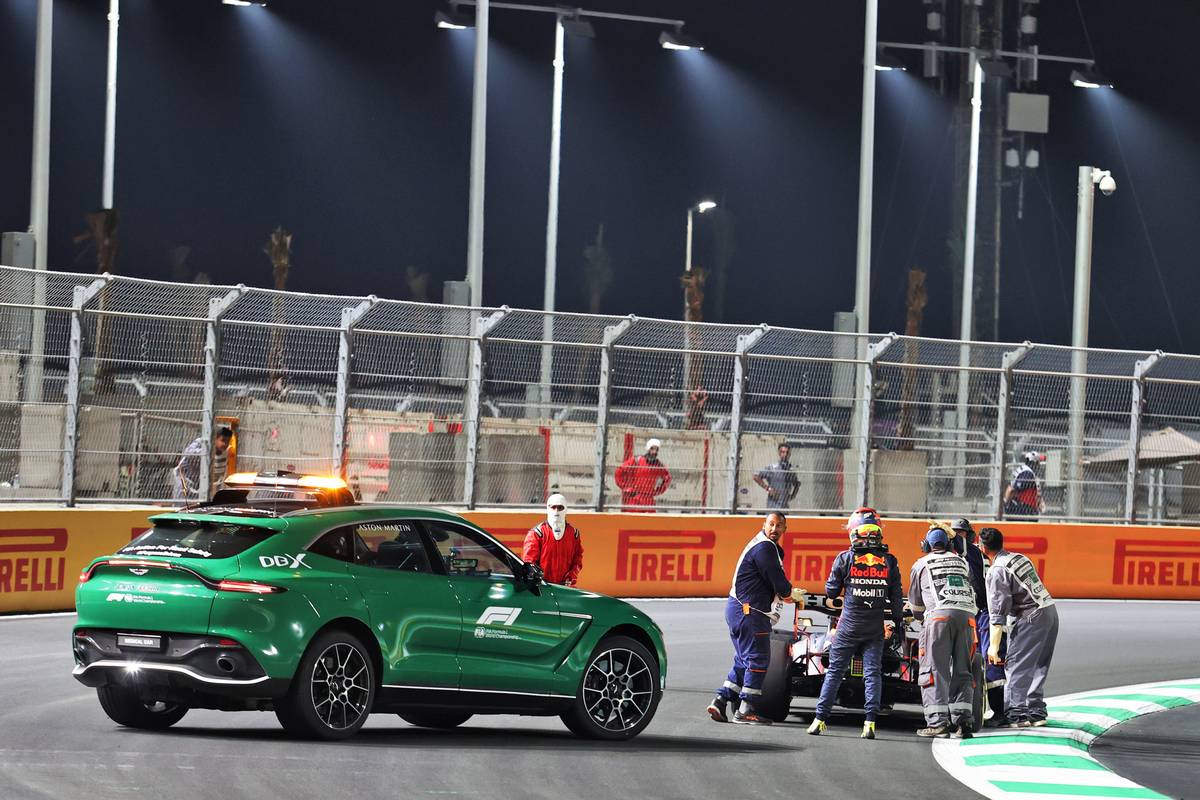 Finally it was time to get the race back underway. Once again Hamilton got the better start while Verstappen struggled; with the Mercedes ahead, Verstappen then cut the corner and barged his way back to the front with Hamilton having to check up allowing Ocon to sweep into second place when Bottas locked up and Perez was turned into the wall as he tried to slip between Leclerc and Gasly going through turn 3. Further back there were more incidents with Nikita Mazepin finding the road ahead blocked by a mess of traffic and ending up in the wall after running into the back of George Russell's Williams. The amount of debris strewn across the track meant race control swiftly moved to a second red flag.

During this latest stoppage, race director Michael Masi was on the radio with team representatives to work out how to resolve the chaotic situation for the restart. Since Verstappen had retaken the lead by going off track, he had to accept a drop to third place, with Hamilton promoted to second and Ocon rewarded for his quick thinking and audacity with pole for the standing restart. Behind them Ricciardo was in fourth followed by Bottas, Gasly, Leclerc, Giovinazzi, Sainz and Aston Martin's Sebastian Vettel rounding out the top ten. Verstappen opted to use the time on pit lane to change back to mediums, but Mercedes assured a fretting Hamilton that the hard compound was still the right choice given the number of laps remaining.

A third start of the night saw Hamilton once again get a good start, but Verstappen used his mediums to dramatically send it down the inside in a banzai move: while Hamilton was making minor contact with Ocon, this time the Red Bull was able to take the lead legitimately from both of them into the first corner. Hamilton regrouped and soon managed to dispatch Ocon for second, leaving the race once again in the hands of the two title rivals, while further back Leclerc had lost four places and dropped to tenth promoting Giovinazzi to seventh ahead of Vettel and Yuki Tsunoda. 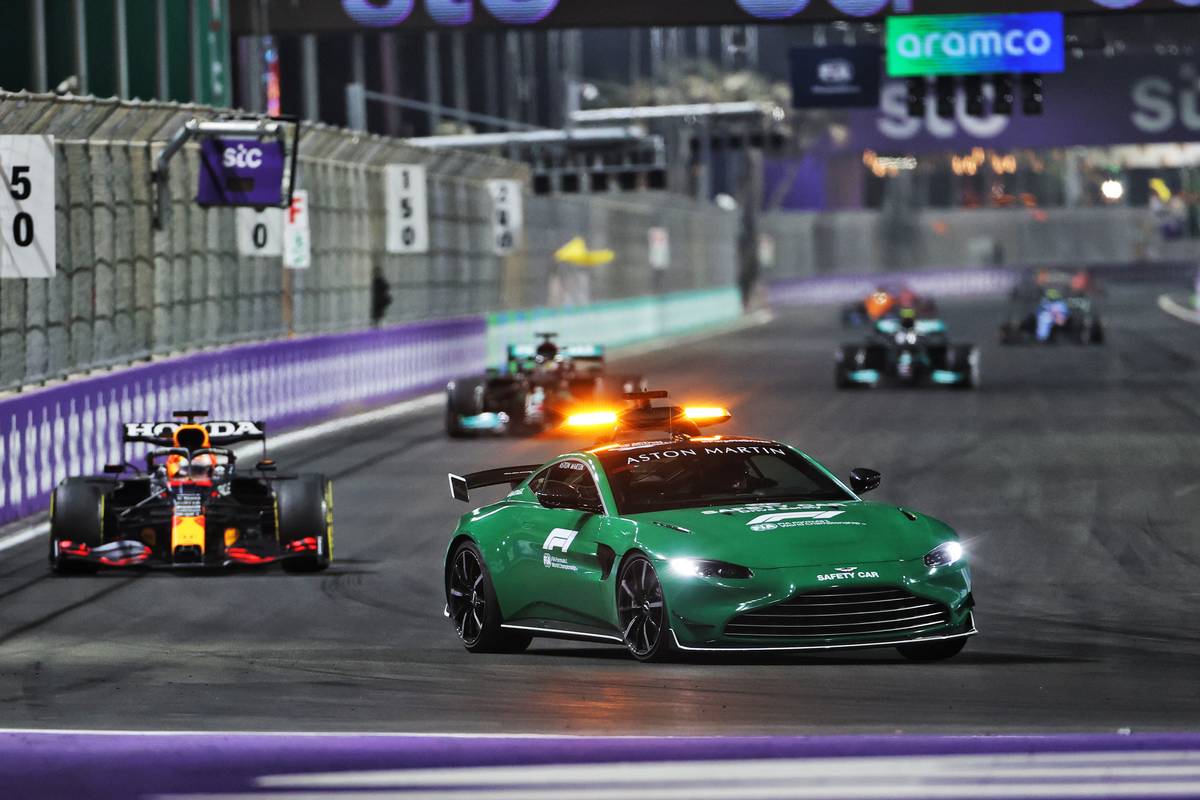 Tsunoda made an attempt to pass Vettel at the start of lap 23 but the Aston protected his line and the AlphaTauri hit the wall, struggling to get back underway when his shattered front wing became lodged underneath the car. This time the incident was managed under a brief Virtual Safety Car, which gave no opportunity for Hamilton to close up on Verstappen. When racing resumed Vettel was also involved in a separate incident with Kimi Raikkonen which left the Alfa similarly pitting for a new front wing and the Aston with significant floor damage that eventually resulted in the team retiring the car. Fernando Alonso went for a separate solo spin, prompting the two-time champion to complain of debris on track and an overworked race control to declare a new VSC to allow for some clean-up on aisle 2.

All this was playing into the hands of Verstappen, who needed to make his medium tyres last the race against his rival on the more durable hards. However the VSC had also allowed Hamilton to move close to DRS range of the leader, while Ocon was 20s further behind closely pursued by Ricciardo, Bottas and Gasly as racing resumed with 17 laps remaining. Hamilton closed on Verstappen only to be thwarted by another brief VSC on lap 36, but this time he now had DRS for the restart. Verstappen once more refused to allow the Mercedes past at turn 1 and keep his foot down, cutting the corner again regardless of the risk of collision, but it was too much. Red Bull was in the process of telling their driver to cede the position for fear of receiving a penalty when Verstappen applied the brakes and Hamilton ran into the back of him, damaging the front wing of the Mercedes as he angrily accused his nemesis of brake testing him - although Verstappen insisted he had just been trying to obey the instruction to hand back he place.

Race control made the order for Verstappen to turn over the lead official, but he gave little sign of slowing to allow it. When he finally did so he timed it for a point on the circuit when he could immediately retake the position by picking up DRS, making something of a mockery of the 'give the place back' instruction, and within seconds race control crashed in with an emphatic five second penalty for the original corner-cutting. Verstappen belatedly handed the track position back, but by now it was too late and he was in effect twice-penalised as Hamilton started pulling away at the front.

With victory now in Hamilton's hands, attention turned to who would pick up the bonus point for fastest lap. The five second penalty meant that Red Bull judged the gap back to Ocon too close to allow Verstappen to make an extra stop for fresh tyres, and Mercedes boss Toto Wolff also brought Bottas into play to close off any options remaining to their competitors. Hamilton duly clinched the point to equal the situation in the drivers championship, while Bottas made a last lap pass nn Ocon for third in a big boost to Mercedes' prospects in the constructors standings.

Ocon was forced to accept fourth ahead of Ricciardo and Gasly followed by Ferrari pair Leclerc and Sainz, with Giovinazzi and Norris scooping up the last of the points. Just missing out were Lance Stroll, Nicholas Latifi, Alonso, Tsunoda and Raikkonen with Vettel joining Perez, Mazepin, Russell and Schumacher in retirement by the chequered flag.