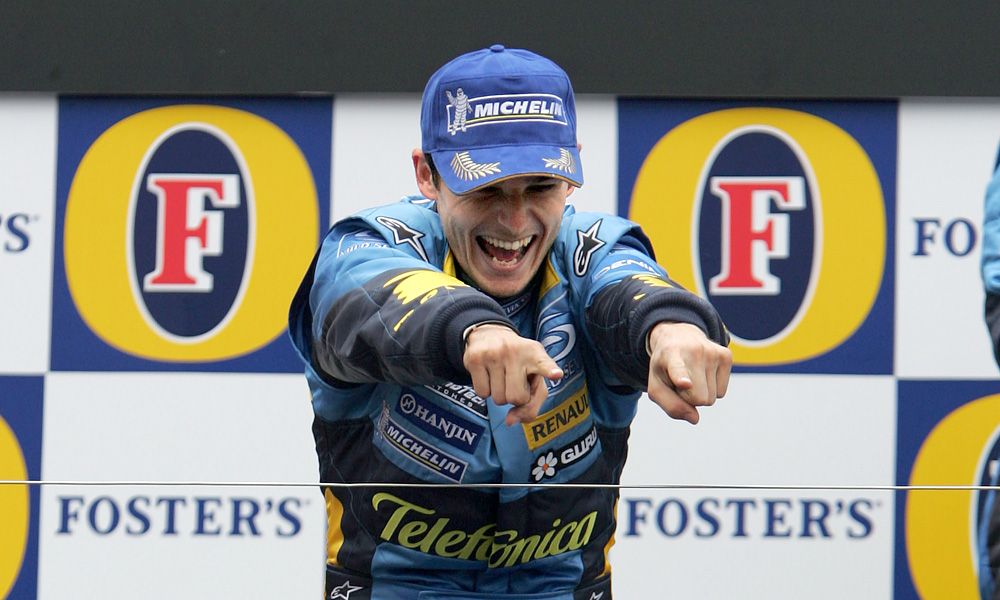 Giancarlo Fisichella is celebrating his 45th birthday today. Hopefully he will have a large class of fizzy on hand to help him mark the occasion!

The energetic Italian started 229 Grand Prix races during a career that spanned 14 seasons in Formula 1. He made his début in the 1996 Australian Grand Prix with Minardi, and had eight further outings that year.

He was handed a full-time seat at Jordan the following year and finished on the podium twice, in Canada and Belgium. After that he moved to Benetton for a four year stint, and clinched at least one podium each season.

However the all-important elusive win didn't come until 2003 when he found himself back at Jordan. The Brazilian Grand Prix was his 103rd career start. He was eighth on the grid and working his way forward when torrential rain hit Interlagos and triggered a number of serious accidents. The race was red flagged, and McLaren's Kimi Raikkonen declared the winner. However the FIA overturned the decision and Fisichella was handed the win a few days later.

There was no doubt about his victory in Australia with Renault in 2005 (pictured above), or about his success in Malaysia the following year. Fisichella was fourth in the drivers' standings that season, a career-high ranking.

A move to Force India proved a disappointment, but he did capture second place at Spa. That put him on the radar at Maranello, as Ferrari were looking for someone to take over from the injured Felipe Massa for the rest of the season. Fisichella achieved his life-long dream of becoming a Ferrari driver the following race, at Monza.

Fisichella completed just five races with the team before retiring from competition at the end of the season. He stayed on as reserve driver before turning his attention to sportscar racing. He's still racing today: in 2017 he took part in the FIA World Endurance Championship (LMGTE Pro), Blancpain GT Series Endurance Cup and the IMSA WeatherTech Sportscar Championship (GTLM).

So whatever he has planned for his birthday today, it's unlikely that Fisico will be sitting still for long!

Verstappen gets toughened up for 2018

Leo DiCaprio hangs out with friends in Morocco