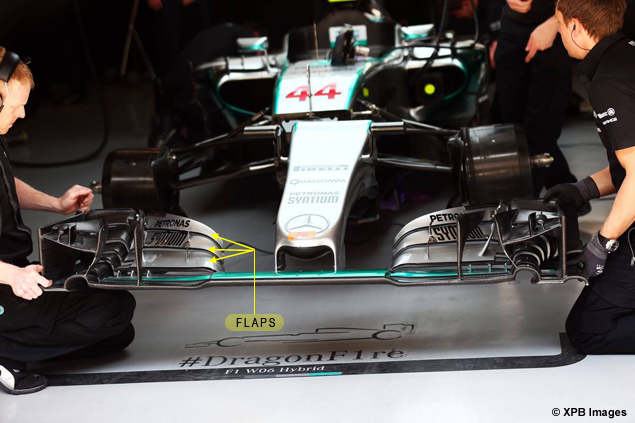 Earlier this week, Formula One’s governing body the FIA sent a new technical directive to F1 teams, which calls for stricter deflection tests on front wings, in accordance with article 3.17.8 of the sport's technical regulations.

While these theoretically forbid the use of flexible aero elements, squads have come up with clever solutions to improve their car’s performance, including taking advantage of loopholes in the rules.

So far, front wing stiffness was tested with the application of a single load on its outerboards, as this helped visualise any potential main board deflection. However, the regulations did not require similar tests on other parts of the wing, which could therefore flex at high speed. Flap deflection has also been clearly spotted on several cars, as seen on this onboard video of last year’s Williams FW36 at Spa.

Broadly speaking, current front wings are divided into two distinct parts. First, there is the outer section, which generates a powerful vortex around the tyre in order to divert the dirty wake coming off the rotating wheels. Then come the flaps that create downforce and the Y250 vortex.

Since these aero elements were outside the scope of deflection tests, engineers had free rein to use aeroelasticity principles to deform carbon structures in certain conditions (Red Bull has been a pioneer in the field).

The FIA had to find a way to close the loophole…

Scene at the Monaco Grand Prix