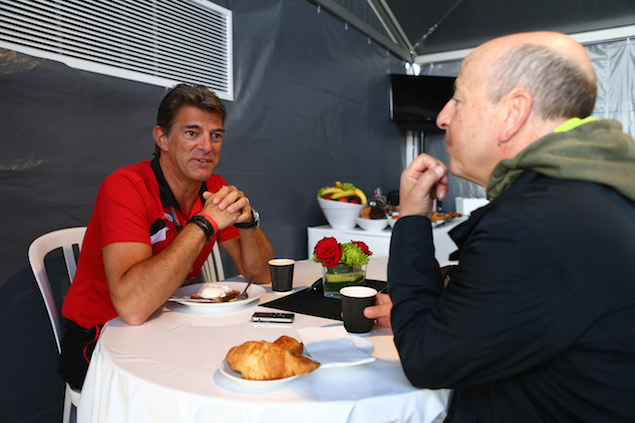 Work in Formula One and you can forget there are other life forms outside the paddock. So, when Graeme Lowdon first came through the swipe gate, little was known about the CEO of the then Virgin Racing team – remember them? However, he’d been involved in motor sport long before that day and is an extremely successful entrepreneur. We caught up with him in Canada, at a time when Manor has featured heavily in the news, with a new third driver and several key technical appointments being announced as well as new sponsors in the form of Airbnb and UK TV programme “TFI Friday.”

Give us a potted version of how you ended up here in the F1 paddock.

I’m an engineer, I did a Masters degree in Mechanical Engineering and then I worked for Rolls Royce aero engines. I left school and went to work on the shop floor and they sponsored me to study engineering at Sheffield University. After that I did a second degree in Business Administration and worked in the electric power industry, so power stations.

On the one same day in 1996, I set up a Formula Renault team and an IT business

I always had an interest in motor racing which came from my father. He collected cars, when they were cheap! But primarily he built up a very big motoring library of rare books from the 50s onwards and also car brochures, from that period. He had maybe 50 or 60 thousand brochures. He’d go up to Charterhall and watch Jim Clark and the like race. I inherited his love of motor racing but I wasn’t involved in it, until the company I worked for sponsored an Indycar team in the mid-Nineties and so for a year I worked on that programme effectively as a sponsor. It gave me an insight into how a professional race team worked. I enjoyed it so much that I decided what I really wanted to do was to run a race team.

So, on the one same day in 1996, I set up a Formula Renault team and an IT business.

Well, both companies had two employees, the same two employees. We entered the British Formula Renault series where we raced against a team called Manor and that’s how I met John and Mary Booth. We got on really well even though we were rivals. There were two classes in Formula Renault back then; one for new chassis which Manor usually won, for example with Mark Hynes in ’97 before going on with Kimi and Lewis. And there was another category for one year old chassis and we would win races in that. 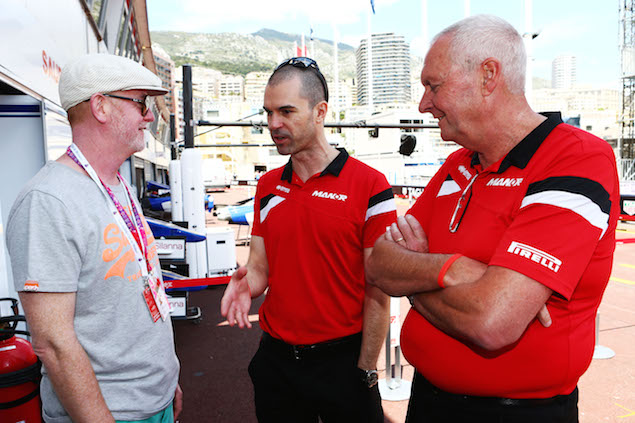 In the meantime the IT business had grown very quickly from two employees to a couple of hundred and in 2000 when Manor had won the British F3 championship the previous year and John was running Kimi in UK Formula Renault, John suggested I join Manor. It worked really well for me and to cut a long story short, I joined Manor and sold the IT business which gave us a lot of independence in life, which meant we could focus a bit more on racing.

In early 2009, we were looking in what direction we should take Manor next and that was when the FIA were contacting teams (to enter F1) and it seemed the obvious opportunity. In the meantime I’d set up another IT business and that built radio networks for railway operators. The business grew very quickly and one of our customers was Virgin Trains. The most important thing to do was to have an extremely strong brand relationship and we knew Richard Branson through the business.

Did that mean you didn’t really have to pitch for the sponsorship?

No, it was quite a tough pitch because, at the time Virgin was sponsoring the team that would go on to win the world championship. That’s a tough one to pitch against!

But we could show them we were coming into Formula One as a challenger brand. It wasn’t going to be easy, especially as the goalposts had been moved so many times before our car had even been produced. We were making a car for a 20 million, then a 30 and a 40 million cost capped Formula One. Virgin could see a lot of opportunity for them and so they came in and that rambling story is how I ended up in Formula 1 after 14 years in the junior formulas. We had some great drivers with Manor: Lewis Hamilton for three years, Kimi Raikkonen, Paul di Resta and we were already working with F1 teams, looking after their driving talent for the future. Manor won 19 championships in 19 years and 180 races. We did it with 18 employees and a budget that would be the equivalent of a Formula 1 team’s travel budget for a year. 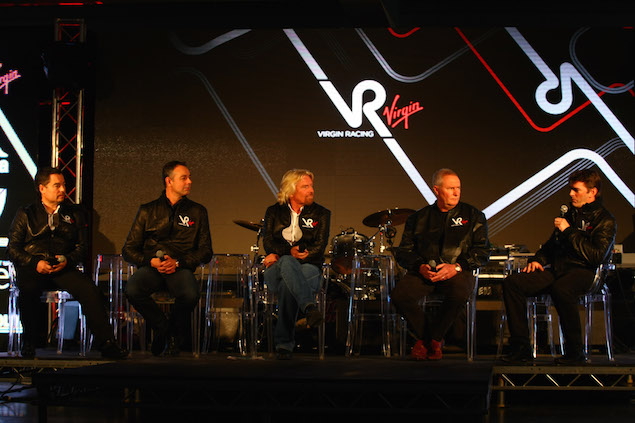 We viewed going into Formula One like going into a start-up business, as was the case with my first tech companies. There’s a mentality that’s very different in working in a start up business and it proved very useful as we had no option back then to delay our entry into F1 as Haas has been able to do now.

With young drivers coming into F1, they’ve normally been used to winning championships in the other formulae and they have to adapt to finishing well off the podium and no longer being the stars of the show. Have you had similar feelings as a team boss who was used to washing champagne spray out of your clothes every Sunday and now you’re at the back of the grid?

The main thing is you have to respect the championship. It started before I was born and it will go on long after I’ve shuffled off. John summed it up when he said we want to gain the respect of the other teams and I would hope that we’ve done that.

Although some of them took against you in recent months…

Yes they did. But the current structure of Formula One sets teams against one another. 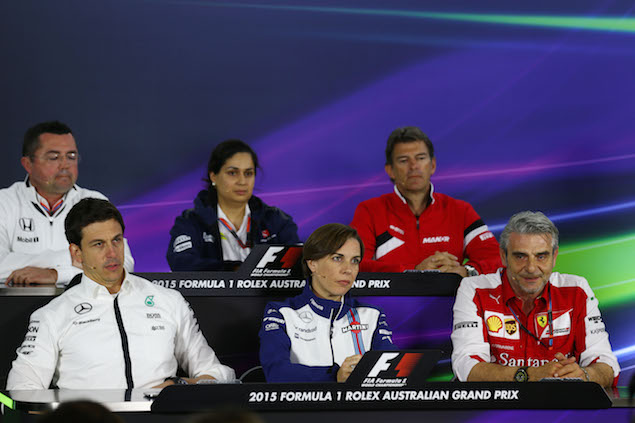 I think you’ll find that’s quite possibly a deliberate ploy!

I’ve got an obligation to do everything I can for the stakeholders in this team. If you look at the effort that went into saving the team over the past six months it was enormous. If you are prepared to watch your team disappear then you shouldn’t be in this business. Formula One is more than the money: there’s a thousand ways to go and make a pile of money outside the sport and I think the people who get the most out of it are those who respect its heritage and history.

Of course we’d love to be further up the grid. But the implications of what happens when things get tough are much more severe now than in the past.

As an example of that, looking through my father’s magazines, I found a copy of a 1965 article about F1 and it said “Formula One is at risk, costs are spiralling and there’s an uneven distribution of funds, technology is going crazy etc” all the problems were the same as today. Over the page was an article that said that in 1964, Ferrari spent £400,000 on their race programmes, which means Formula 1, GT and Sports Cars. In today’s money that’s £7.5 million. Today, that would keep Manor, the smallest team in the field, going for six and a half weeks. It means that today, there is much more at stake. So the obligations of everyone in this industry are greater.

Getting away from all the heavy stuff, tell me about all this sketching you do on your travels.

It started last year. On one trip I was going to have a 14 hour stop over in Dubai and I wanted something to do to pass the time. We’d bought my daughter some drawing pencils and I hadn’t tried it since I’d been at school, so I took some pencils and paper with me and on the flight, I started doing a picture of Senna, copying from a magazine and before I knew it, 12 hours had sped by. I have been doing it since then, all drivers wearing their crash helmets, as I’ve worked out I’m not very good at drawing lips and ears! 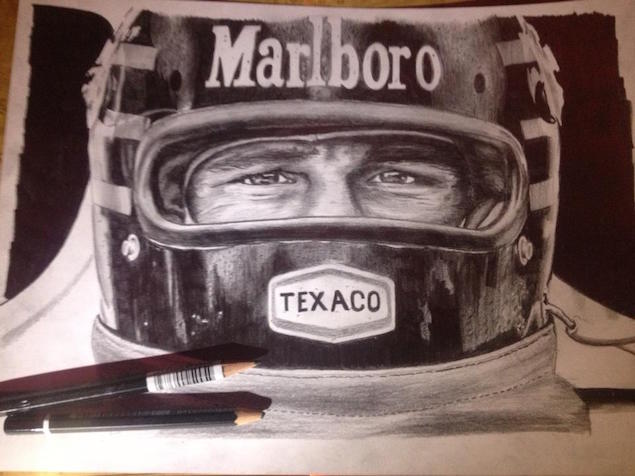 I did two or three of Senna and various others from the past. I’m working on a Jim Clark at the moment. I can remember which flight I was on when I did which drawing and I recall that James Hunt was a particularly bumpy one! I put a couple of the pictures on Twitter and I was amazed at the huge response it got. I’ve printed some and given them to be auctioned off by charities.

It’s a stress buster as well I guess

Yes, except I did find if I was struggling with one I might get stressed about it and I had to tell myself that wasn’t acceptable.

Then there’s the marathon running, which isn’t something I instantly associate with F1 team bosses. How did you end up running last year’s London Marathon?

Mark Hynes who won the ’99 Formula 3 championship with us is a really good friend. He’s younger and fitter than me and used to do a lot of running at the circuits and at Hockenheim a couple of years ago he suggested I go with him. We started doing the Run The Track thing that was organised at the F1 races. Then, last year when things were going very badly, Mark told me the BRDC was looking for people to run the London Marathon for Cancer UK and I wanted to do it. I thought ‘well it looks like I’m unemployed, so I need to focus on something.’ I had a lot of time on my hands to do some training. But then the tide turned with the team and I was working 24/7 on saving it, so when Marathon day came around, I’d hardly done any training and never done more than a half marathon. 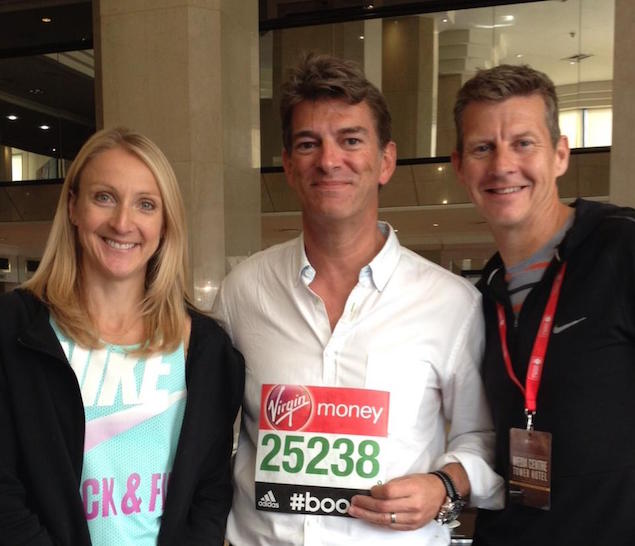 I knew Steve Cram well, he was a friend and he introduced me to Paula Radcliffe and I couldn’t back out because Cancer UK is a charity close to my heart for various family reasons. So with brand new kit apart from my shorts, which I don’t think are performance enhancing, I set off on the 42 kilometres. I really enjoyed the day, although I had a problem with my knee after the first half, which had gone very well and I’d been looking at a four hour time. I was very proud to have a ‘sports injury’ as I’d never had one before, never having done any sport! I finished but at a much slower pace to make sure I got round.

Finishing at a slower pace to make sure they get round is how the reborn Manor team started this season, but there are definite signs of progress, as the 2015 marathon F1 season heads for its halfway point. 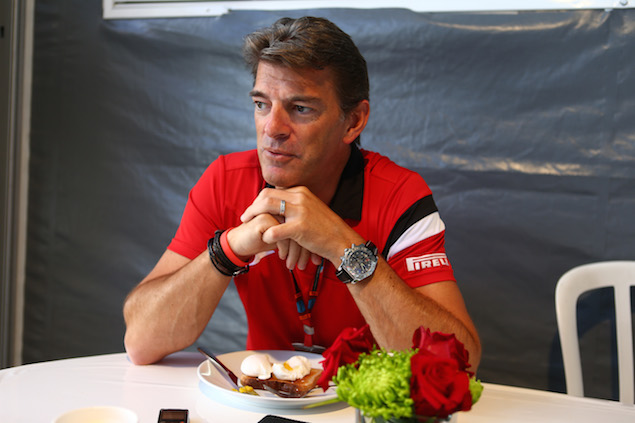