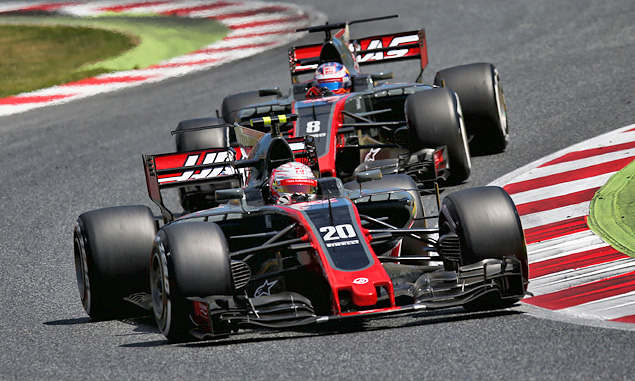 Romain Grosjean
“Well, it’s good for the team to score a point, but a shame for Kevin with his puncture to lose P9. I had a good start, then into turns one and two there were a lot of cars spinning. I had to go on the astroturf to avoid them. If that hadn’t been the case, I’d have been next to (Nico) Hulkenberg or in front of him and the race would’ve been different. The pace was there on the softs, but I was always into traffic. On mediums – I really struggled to get those tyres to work. There’s a lot of work we can do. I was happier with the car today than yesterday, but still we have to work hard to get a good run home.”

Kevin Magnussen
“It’s annoying. We could’ve had the points with both cars, so it’s pretty disappointing. There was some contact there with Kvyat. I would’ve been fine, but I got a puncture from the contact. I gave it everything I had today. If we had finished in the points, that would’ve been a good result for us. I’m very disappointed not to do that.”

Guenther Steiner, team principal
“A disappointing end following a good start to the race. We were in good positions, the car was going well on the soft tyres, and then the Virtual Safety Car came out. We lost all our momentum. It just came out at the wrong time. We went too early onto the medium tyres, not as planned. The medium tyre – we just couldn’t get it to work. The guys lost a few positions and then Kevin had a puncture. The only good thing coming out of here is that we got a point. We should have more, but that’s racing.”