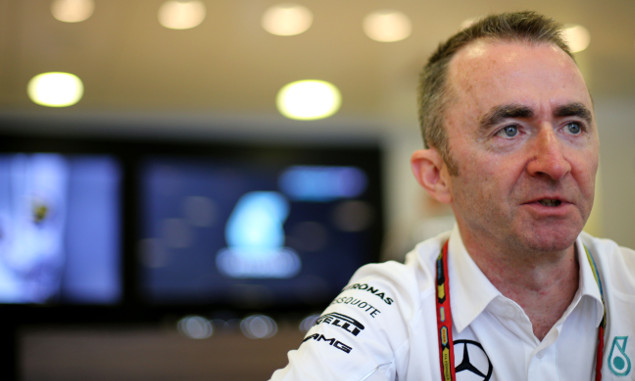 After spending six years at Williams and two decades at McLaren as an engineer, Paddy Lowe joined Mercedes in mid-2013 to serve as Executive Director. The 52-year-old Briton may be less of a media darling than acolyte Toto Wolff, and perhaps not as emblematic as predecessor Ross Brawn, but he’s quickly established himself as a key component in the Anglo-German team.

To keep it short, I’d say there are four key ingredients to our 2014 success. We had the best power unit as well as one of the best chassis; we enjoyed strong manufacturer support as a works team; and we could rely on a pair of very talented drivers who managed to extract every ounce of performance out of their cars. In 2014, more than ever, overall package homogeneity was paramount to success rather such or such component, including the power unit. This is highlighted by our W05 being faster than other chassis fitted with the same turbo V6.

You listed being a works team as one of the prime factors for success. How did things work out at Mercedes?

Building both the engine and chassis within the same structure allows you to come up with a better overall package, which has become one of the most critical parameters in the sport nowadays. When you look at F1 cars that were racing 20 or 30 years ago, you’re almost shocked to see how much dead space there was! (Laughs). Basically, you need to fit the vital hardware within the minimum space so that you can play around and follow the most competitive aero concept. In other words, this amounts to striking the right balance between aero prowess and structural efficiency.

Could you be more specific?

Let’s take the fuel tank for instance, bearing in mind that we’re allowed to use only 100kg of fuel during a race, actually slightly more if you factor in the formation lap, etc. We had chassis and power unit engineers brainstorm to ascertain the tank’s optimum size and shape. One of the key factors they had to take into account was the back of the tank being in contact with the heat released by the turbo V6. Together, engineers had to find the best compromise between length and width. A broader tank naturally affects the design of the radiators, which in turn impacts the car’s overall airflow resistance. So getting the tank right will pay dividends aerodynamically. Another good example is the exhaust system. On engine dynos, the best exhausts do not make any concessions to aero demands. Similarly, the favoured aero options do not work with acoustics. Therefore, our guys at Brackley and Brixworth, with help from their colleagues in Stuttgart, had to find a happy medium after running simulations that aimed at calculating overall performance gains in the most accurate way. Their joint efforts further extend to the realms of heat exchanges, oil tank space, airbox design, etc. On all these areas, we work as one single engineering team.

How proud do you feel to have won the first titles of the new hybrid turbo era?

We are very proud indeed. It’s been a while since F1 teams had to reset and start from a blank canvas. Innovation is etched in our sport’s DNA so we’re here to promote radical technologies that are also more environmental friendly and can be transferred to the automotive industry. This is truly the case now that performance is driven by efficiency, which is a first, and brings a whole new approach to grand prix racing. We’ve actually managed to make the word “hybrid” fashionable, while also establishing more relevant links with road-going cars. Performance used to be all about driving flat out without paying too much attention to overall efficiency. Now, the more efficient you are, the faster you go!

The entire F1 paddock should be proud of their recent achievements, even more so that these were accomplished within a short timeframe. At the end of the day, we are competing with other sports so Formula One should better promote its successes.

This won’t surprise you but I do relish competition. Being able to prove yourselves every other week by developing ground-breaking technologies remains a very rewarding experience, as long as you win! (Laughs). Conversely, nothing annoys me like seeing a rival outwit us. I remember that, along with their active suspensions, the early 90s Williams F1 cars already featured blown diffusers, so I am still not entirely over Red Bull revisiting the idea before we did. Admittedly, we introduced several innovative concepts in 2014, but I expect us to face a stiffer challenge this season, especially after the engine freeze was lifted over the winter.

What if ? Ferrari's brewing perfect storm