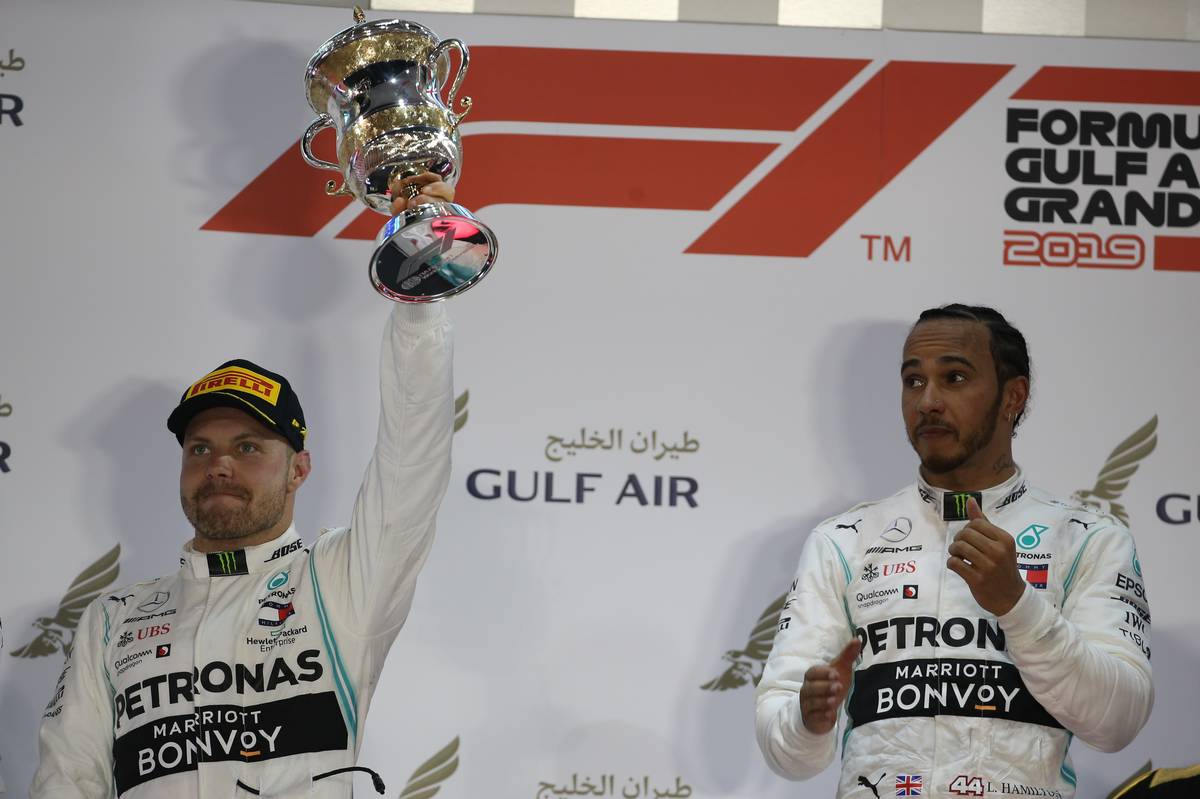 Valtteri Bottas
"This was not an easy race, the car was very difficult to drive and the conditions were very tricky with the gusty winds today which made the car very unpredictable. I had a good start and managed to get to P2, but in the next lap the wind caught me up going into Turn 1, so I lost the position again and ultimately fell back to fourth after a battle with Lewis. After that it was actually a relatively lonely race for me at points, I didn't see anybody; but I think it was probably very exciting from the outside with many unexpected moments. Ferrari were very strong again in the race as they were all weekend. But luck was on our side today, which was a welcome change for me personally after all the bad luck I experienced last year. On the other hand our car was very reliable which ultimately won us the race today. It was a tough race for Charles, but he did a great job all weekend and I'm sure his time will come. We're leaving Bahrain with lots of points but also a lot of work to do for China."

Lewis Hamilton
"It was very tricky out there today and I had to give it everything I had. We were very, very lucky to get this 1-2, Ferrari outperformed us all weekend. Ultimately you want to have a real fight and want to pass someone because you're quicker, so it feels a bit weird and you can't quite believe your luck in these scenarios. I have been in similar situations and I know how it feels, but Charles did a great job all weekend long and has a beautiful, bright future ahead of him. We've only had two races; one where we were rapid and far ahead, one where Ferrari had the upper hand. It's hard to say how the next races are going to pan out, but I anticipate that it will be a tough fight and that it will be a back and forth between the two teams. We need to keep working hard to see where we went wrong this weekend and to see where we can improve the car. But as we saw again today, reliability also plays an important role, so we need to keep working on all areas. We'll take the points we got today and move forward to China."

Toto Wolff, head of Mercedes-Benz motorsport
"Charles was very unfortunate today; he was the quickest guy out there and should've won the race. But on the other side that's racing; sometimes you are lucky, sometimes you are unlucky - in my experience it all weighs out in the end. Lewis drove a strong race today. He fought a fight with a weapon that maybe wasn't on his opponents' level, but he managed to stay close to Vettel and win that battle on track, which was one of the key moments for the victory. Valtteri had a tougher day in the office, he was struggling with the tyres on the very abrasive asphalt here in Bahrain. We're walking away with 43 points from this weekend, but it is clear that we were very fortunate today and that it was our reliability, not our pace that won us the race. We are lacking straight line speed which is very important in China. So we need to stick our heads together and analyse why we were struggling with our pace both in qualifying and in the race. It's a very close fight and we need to make sure to bring our A game in order to be competitive in Shanghai.

Andrew Shovlin, chief race engineer
"We're delighted with the 1-2 today but well aware that we didn't have the fastest car this weekend and we've got some work to do to catch Ferrari. We've lacked a bit of rear grip and a bit of straight line speed this weekend and this made qualifying and the race difficult. We've got some developments to try at the test here that should help our speed in the corners; it would be nice in China if we can rely on our pace to get the win rather than good fortune. However, the team did work really well today under a lot of pressure our car has been perfectly reliable here all week which is great to see. It was really unfortunate for Charles today, he has impressed everyone with his speed and composure, so to lose the win through no fault of his own must be tough, but it looks like he won't have to wait long for the next opportunity."