Fernando Alonso is facing pressure to come to a decision about his plans for 2019 in the next few weeks.

IndyCar Series team boss Michael Andretti says that the two-time world champion will need to let him know by mid-August whether or not he wants a full-time seat with them next season.

"We are getting to a critical time and we have to get some things done in the next week or so," Andretti told Autoweek magazine.

He indicated that the next IndyCar race on August 19 "will be too late" to organise a full-time entry for next year.

Andretti partnered with McLaren to field Alonso in the 2017 Indianapolis 500, and said he would welcome a chance to work with the Spanish driver on a more permanent basis.

"I would love to have him because he was a joy to work with,” Andretti said. “We had a lot of fun at Indy and I think we would have a lot of fun doing this all year long.

"Fernando is the nicest guy you would ever want to meet," he added. "You really don’t know the person you see in front of the camera.

"I think the team helped him a lot at Indy and if he comes here, he will have pace from the first race.

“It would create a buzz, and a buzz is something you can’t buy," he continued, comparing it to the time when Nigel Mansell moved ot the US.

"It feels like the early 1990s when things started to go for IndyCar. The timing of Fernando coming to IndyCar could help set it off."

While Andretti wasn't ruling out another one-off entry in the Indy 500 for Alonso next season, he said that the driver himself had said that wouldn't happen and that it was a case of "full season or not at all." 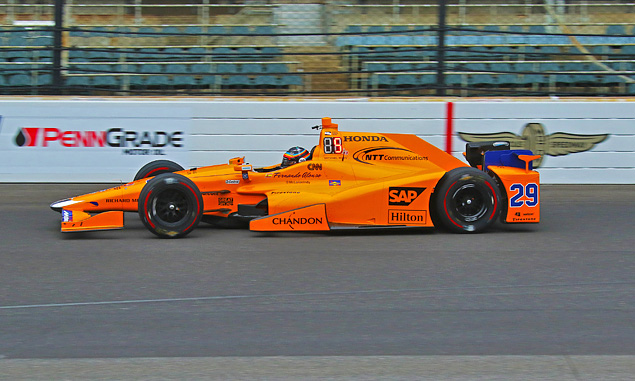 Alonso had to drop out of last year's Monaco Grand Prix to take part in his maiden Indy 500 as the two races are held on the same day on different continents.

He led multiple laps before an engine issue forced him to retire 20 laps from the finish.

Since then, Alonso has gone on to win the 24 Hours of Le Mans endurance race. Together with his dual win in the Monaco Grand Prix in 2006 and 2007 it means he only needs Indy to complete the Triple Crown of Motorsport, which has been achieved only once before by Graham Hill.

But if Alonso decides to stay in F1 for another season, it appears that his push for that accolade will have to wait at least one more year.

"They have to get their driver situation settled," Andretti said of the decision facing Alonso and McLaren CEO Zak Brown.

"Zak has to work on his Formula 1 plan and he has a lot to work out there, but we’ll see what is going to happen."

Norris glad to get first taste of wet weather running