Despite leading from lights to flag, it was a desperate struggle for Lewis Hamilton to clinch victory for Mercedes in the 2019 Monaco Grand Prix over Ferrari's Sebastian Vettel.

Valtteri Bottas picked up third place, despite clashing with Max Verstappen in pit lane. The Red Bull picked up a five second penalty for an unsafe release that cost him a near-certain second place, despite a phenomenal effort from the Dutch driver.

It was another troubled day for local boy Charles Leclerc. The Ferrari driver hit the barrier while trying to work his way back up from his poor grid position, and he ended up retiring from the race with floor damage on lap 18. 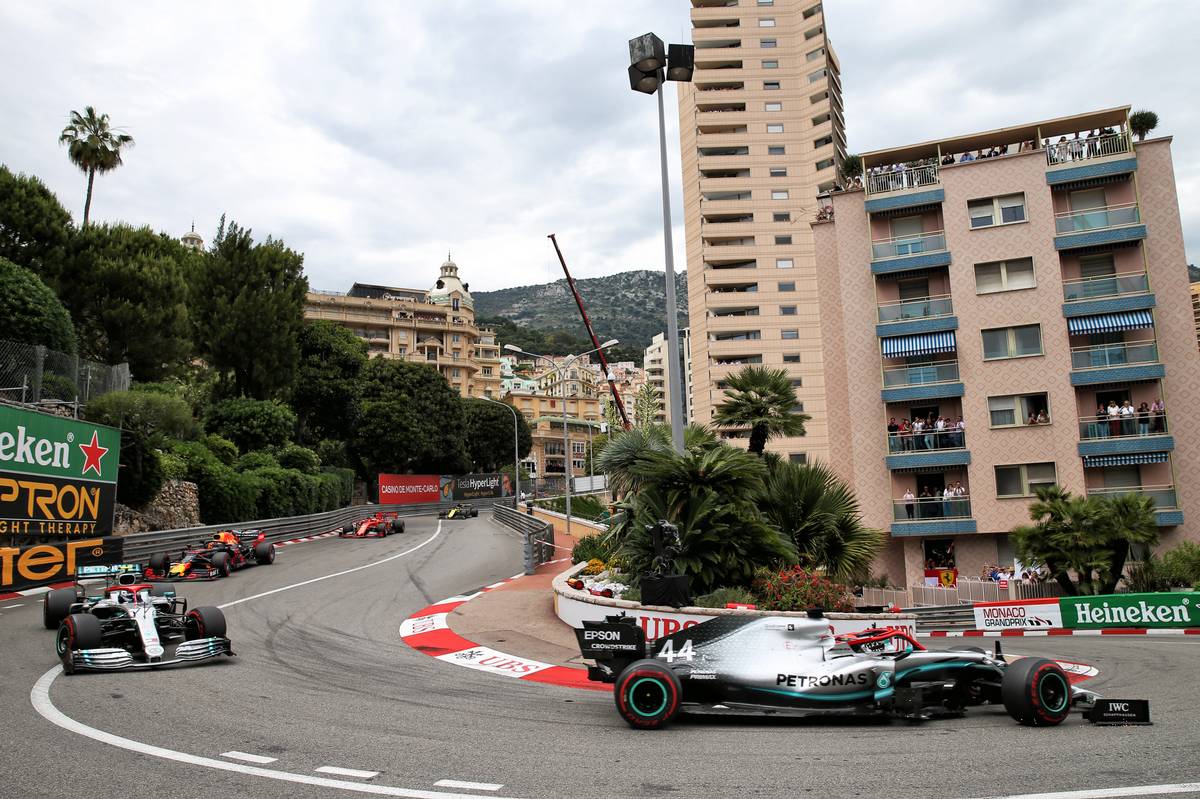 Despite increasingly overcast conditions and a growing chance of rain, the glitz and glamour of the principality was undimmed as 20 drivers lined up in the grid for the start of Sunday's race. With overtaking notoriously all but impossible on the tight and twisting street circuit, arguably the most important battle had already been waged in yesterday's qualifying session; but the second most crucial moment lay ahead with the start of the race, when the lights went out and the cars plunged the short distance into Sainte-Devote for the first of 78 laps.

Polesitter Lewis Hamilton made no mistakes with his launch from the grid, leaving Mercedes team mate Valtteri Bottas to fend off Max Verstappen and keep the Red Bull in third place. That left Ferrari's Sebastian Vettel watching on from behind, with no room to make up positions into the first corner. However 2018 race winner Daniel Ricciardo had succeeded in jumping Kevin Magnussen for fifth, and Pierre Gasly has clawed back one of the positions he'd been penalised overnight and was into seventh ahead of Carlos Sainz and the Toro Rossos of Daniil Kvyat and Alexander Albon.

The start had been a clean one, although there was minor contact between Alfa Romeo's Kimi Raikkonen and Racing Point's Lance Stroll at the Lowes hairpin. McLaren's Lando Norris was falling backward after being passed at the same spot by the seriously out-of-position Charles Leclerc, the local hero proving true to his word about going for broke this afternoon after Ferrari's fumbled qualifying effort 24 hours previously. He soon dispatched Romain Grosjean with a nice move at Rascasse, but then spun when he tried to repeat the move on Nico Hulkenberg next time around. He ended up clipping the barrier, which punctured his right rear tyre and sent him limping back to pit lane.

The flailing rubber had made a mess of the SF90's floor and bodywork which scattered debris across the track, leaving race control no option but to deploy the safety car on lap 10 while track workers got to work cleaning up. The 20-second advantage that the top four had previously enjoyed over Ricciardo evaporated as the leaders scrambled to pit lane for a 'free' stop. Hamilton and Bottas opted for medium rubber, while Verstappen and Vettel were both thinking longer distance and went for the hard compound.

However the pit stops had came at a cost for Mercedes. The team had been forced to double stack their cars, a delay that ended up costing Bottas track position over Verstappen. The pair then made contact on pit lane as they headed back out, and Mercedes was instantly concerned that the Finn had suffered a puncture from the collision. They brought back him in for replacements - opting for hard tyres this time - and sent him back out now in fourth place behind both Verstappen and Vettel. 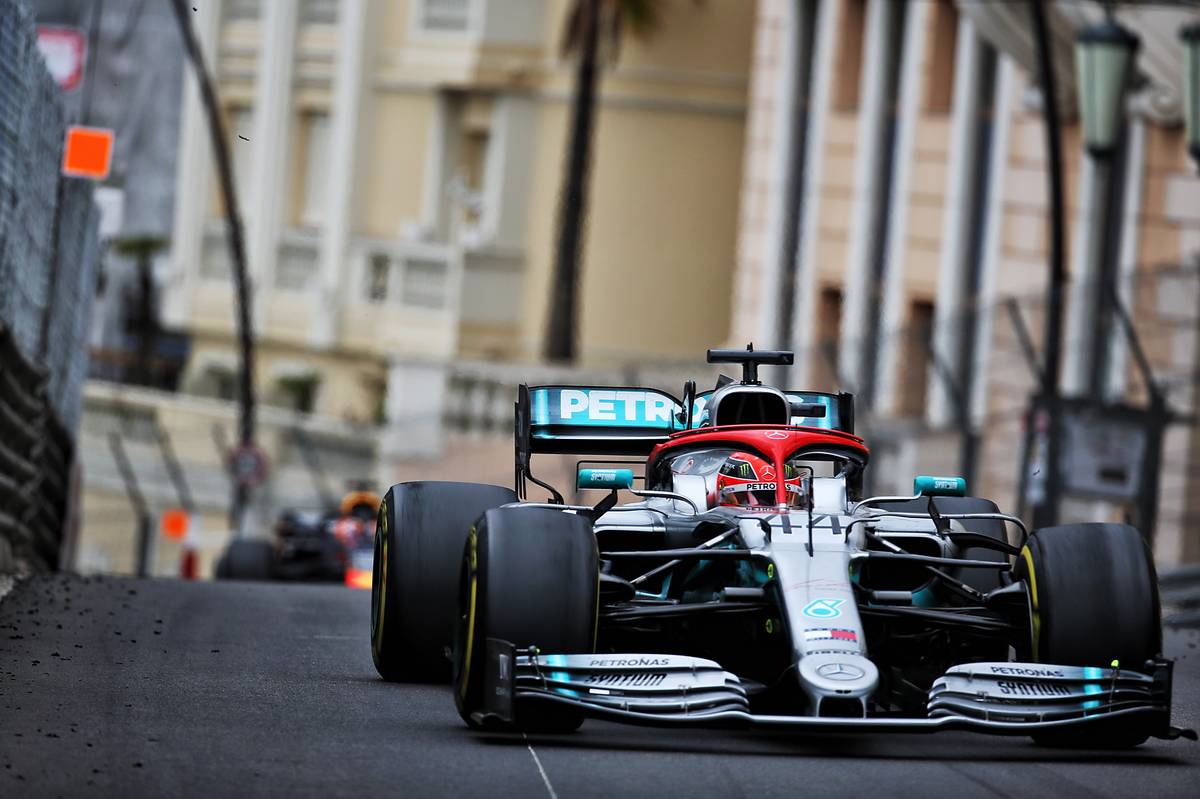 Racing resumed on lap 15 with Hamilton still in charge and Bottas instantly pressuring Vettel, but almost immediately there was a fracas in turn 16 when Alfa Romeo's Antonio Giovinazzi tipped Williams' Robert Kubica into a spin that briefly blocked the entire with of the track. Nico Hulkenberg, George Russell and the luckless Leclerc were forced to come to a temporary full stop while those ahead sorted themselves out. Eventually, everyone did get going with the whole situation neatly handled under local waved yellows with no safety car reprise required. Giovinazzi was subsequently handed a ten second penalty for triggering the mêlée.

Lap 18 saw the end of Leclerc's race as the heavily wounded Ferrari was finally called in to the team garage to retire. Meanwhile Verstappen was having a better time of it, the investigation into his earlier pit lane unsafe release and clash with Bottas earning him a surprisingly mild five second penalty from the stewards. That kept him in the game, especially as his hard tyres gave him a shot of making it to the finish with no further stops while Hamilton was up against it trying the same on the mediums. While the race leader was trying to control the pace in order to extend the life of his tyres, Verstappen was soon turning up the heat and forcing Hamilton to go faster and faster.

Behind the pair, Vettel and Bottas had no trouble keeping up for ringside seats and a chance of their own to pounce. The rest of the field was also starting to claw back some time on the leaders, with the yet-to-pit Albon and Grosjean only around ten seconds behind Bottas followed by Gasly, Sainz, Kvyat and Norris, also yet to make his first call to pit road. By contrast, Ricciardo and Magnussen had dropped to 13th and 14th respectively after copying the leaders with an early stop under the safety car but with significantly less success.

By lap 47, Hamilton was telling the Mercedes pit wall that he was "in a bad way". His task was made even harder by coming up upon the increasingly congested midfield battle. Eventually the leaders found their way past the backmarkers, Bottas coming off worse when he found himself stuck behind the stubborn Lance Stroll for an extended period. But the other frontrunners also had their issues, Verstappen being told to 'lift and coast' for overheating brakes, and Vettel also having to drop back due to overheating issues on the Ferrari.

At least the one headache they had been spared was the arrival of rain. Despite a few intermittent spots of precipitation, the race itself remained essentially dry leaving a tense run to the finish for the top four, with Hamilton growing increasingly desperate and disillusioned as his medium tyres approached end of life status. The team tried to keep his confidence up and encouraged him to carry on despite the problems, while Verstappen ended up throwing everything into his battle to pass the W10 before the laps ran out.

The situation reached boiling point on lap 76 when Verstappen launched an attack out of the tunnel, locked up and made contact with Hamilton's left-rear at the Nouvelle Chicane which caused both men to miss the turn - an incident that the race stewards said that they would look into after the race. Both cars survived the encounter but Verstappen never had another chance to strike, leaving Hamilton to take the win. 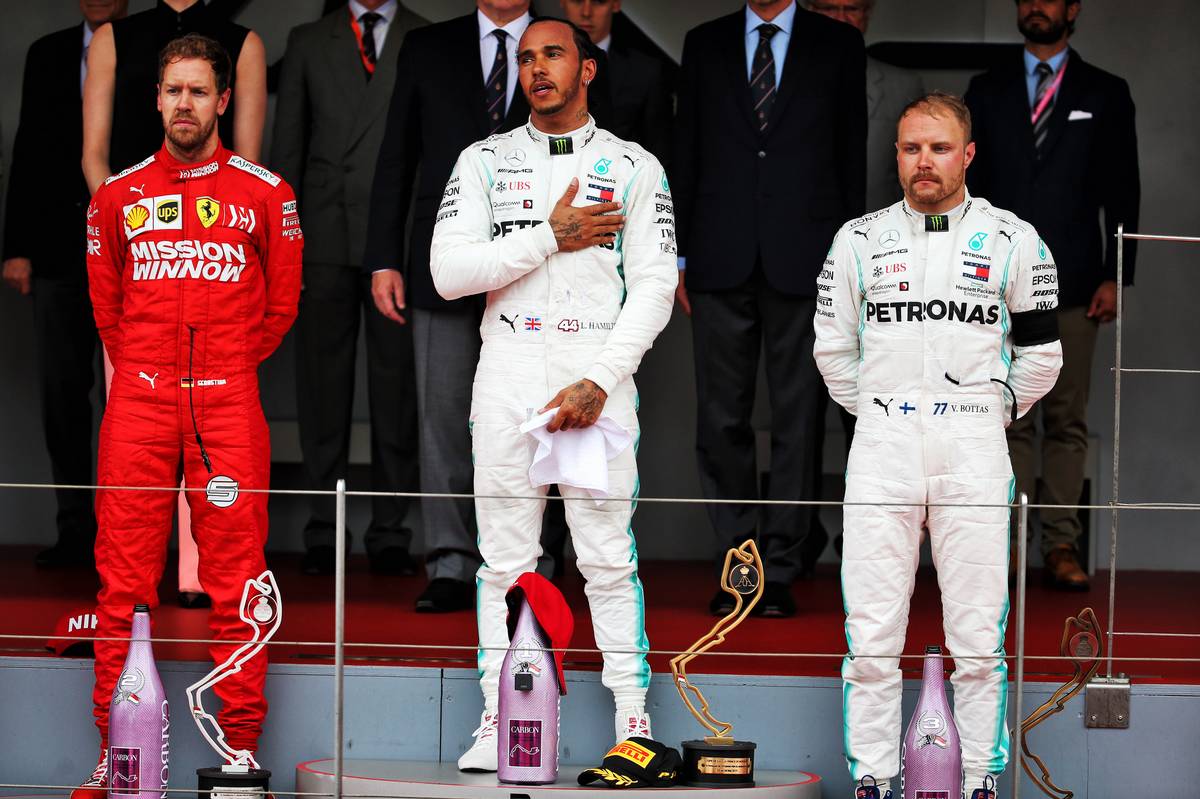 Verstappen was second to the chequered flag but his five second penalty meant he dropped behind Vettel and Bottas in the classified results meaning he missed out on the podium. His team mate Pierre Gasly put in a solid drive to fifth, eking out enough of a lead over Sainz in the process to make a 'free' stop for fresh tyres in pursuit of the bonus point for fastest lap.

Kvyat and Albon picked up seventh and eighth respectively, with the final points going to Ricciardo and Grosjean. Just missing out on the top ten were Norris, Magnussen, Sergio Perez, Hulkenberg, Russell, Stroll and Raikkonen, with Robert Kubica managing to finish in 18th position one place ahead of Giovinazzi.

As the driver made their way back to the pits, the crowded doffed their (predominantly red) caps in homage to Niki Lauda as the Mercedes pit wall congratulated Hamilton and told him that Lauda would have been proud of this one.

Who was your driver of the day? Let us know in the comments!

Hamilton says he would have crashed out before pitting