Max Verstappen was choosing to focus on the positive aspects of today's two practice sessions at Spa-Francorchamps, rather than the accident that meant a premature finish to the afternoon running.

The Red Bull driver was second quickest in the morning, 0.164s behind Mercedes' Valtteri Bottas. The afternoon saw him move to the top although just 0.072s covered Verstappen, Bottas and Lewis Hamilton.

However FP2 ended with Verstappen going into the wall after losing the rear end of the RB16B at the exit of turn 7, just moments after the session had been briefly red -flagged for a similar accident involving Ferrari's Charles Leclerc.

Despite this, Verstappen was happy with the way that Friday had gone for the team, with Red Bull looking in touching distance of their rivals despite a damp track, different downforce configurations and engine modes making it hard to get a clear picture.

"It was good, I think. The whole day we were quite happy," he told the media after the red flag triggered by his accident resulted in a slightly early finish to the scheduled hour-long session.

"Of course a few things to fine tune from FP1 to FP2. Overall we're very happy, so I think definitely a very positive start," he said. "I didn't change anything on my car with the wing

"[There are] a few things to take into consideration with the weather," he pointed out. "It's difficult to say in the wet, because so far we haven't really driven in it.

"Looking ahead to tomorrow, there are of course things to take into consideration including the weather but it’s difficult to say what the track is going to be like in the wet," he suggested. "Saturday and Sunday will be similar weather to today so it will definitely be interesting." 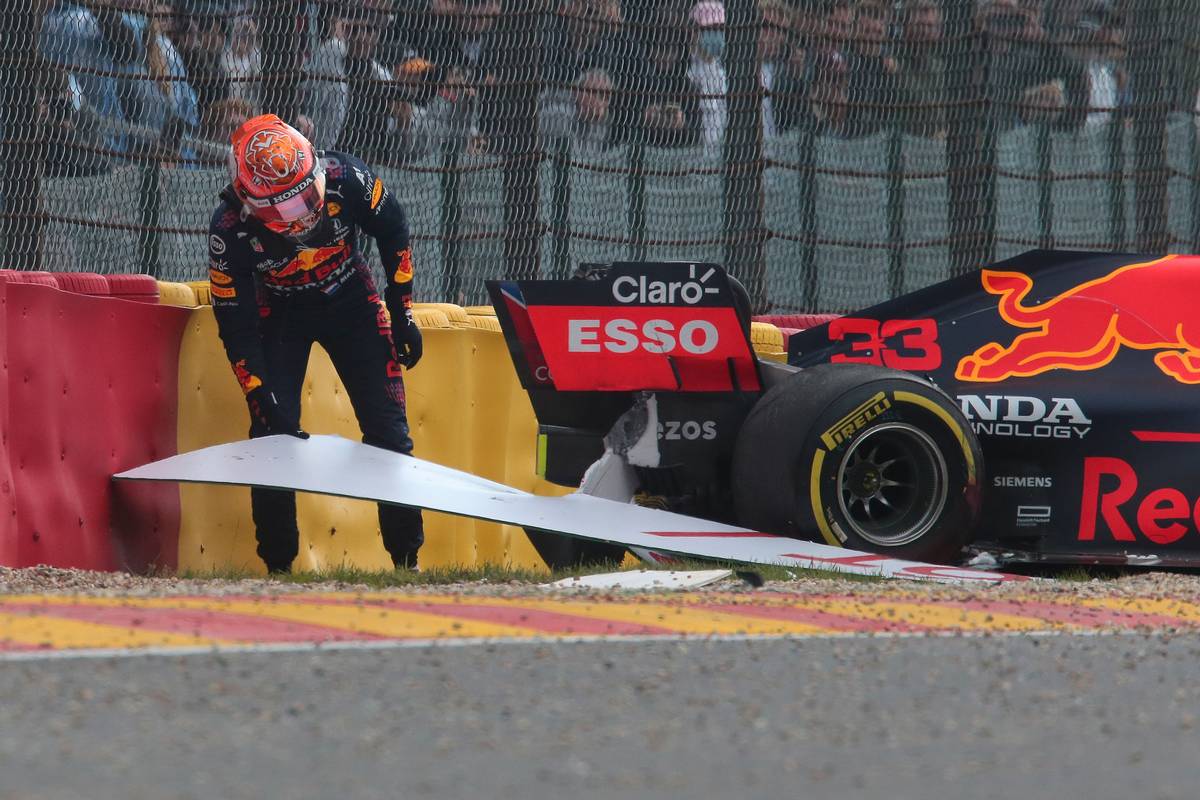 Verstappen didn't have much to say about the accident at the end of FP2. "I don't know, I just lost the rear," he shrugged. "Did a bit too much oversteer to correct, and unfortunately hit the wall."

The Red Bull mechanics will spend te rest of the day and this evening checking Verstappen's car for damage.

The team has already been forced to withdraw Verstappen's second Honda engine of the season from the available pool of power units, following his involvement in an accident in the opening lap of the British GP before the summer break.

It means that Verstappen will be using a third engine this week at Spa, originally introduced at Hungary. It leaves him likely to need a fourth at some point in the remaining races of the season, which would incur a grid penalty.

His team mate Sergio Perez - just confirmed as staying with the team for a second season in 2022 - is also using a third engine this weekend after he was taken out on the first lap of the Hungarian GP.

But for now, the Mexican driver shared Verstappen's optimism for this weekend. "The car feels good," he told Sky Sports f1. "We have good potential for the weekend, we should be able to drive a good qualifying

"The weather is in the back of our minds, but we have to analyse the best data tomorrow," he added. "We collected plenty of information over the two practice sessions, we’ll sit down this evening to analyse it so we have the best package tomorrow.

"I think we will be in the fight and able to have a good qualifying, the pace was strong out there today and it will be interesting to see who has what when they put it all together in Q3."

Hamilton left with work to do after Friday issues