Lewis Hamilton completed a roller coaster weekend in Brazil by storming to victory in the Sao Paulo Grand Prix ahead of Max Verstappen to narrow the gap between the pair in the world championship battle.

The Red Bull driver had seized the lead from pole sitter Valtteri Bottas at the start, but it took Hamilton just 20 laps to make his way from tenth on the grid all the way up to second.

A thrilling mid-race battle between the pair erupted in controversy when Verstappen forced Hamilton wide off the track, but the Mercedes driver had the final say with a second successful strike a few laps later.

Having been mugged by both Red Bulls at the start, Bottas dutifully obeyed team orders to let Hamilton go in front and duly got his revenge on Sergio Perez to finish in third place, although the Mexican clinched the point for fastest lap. 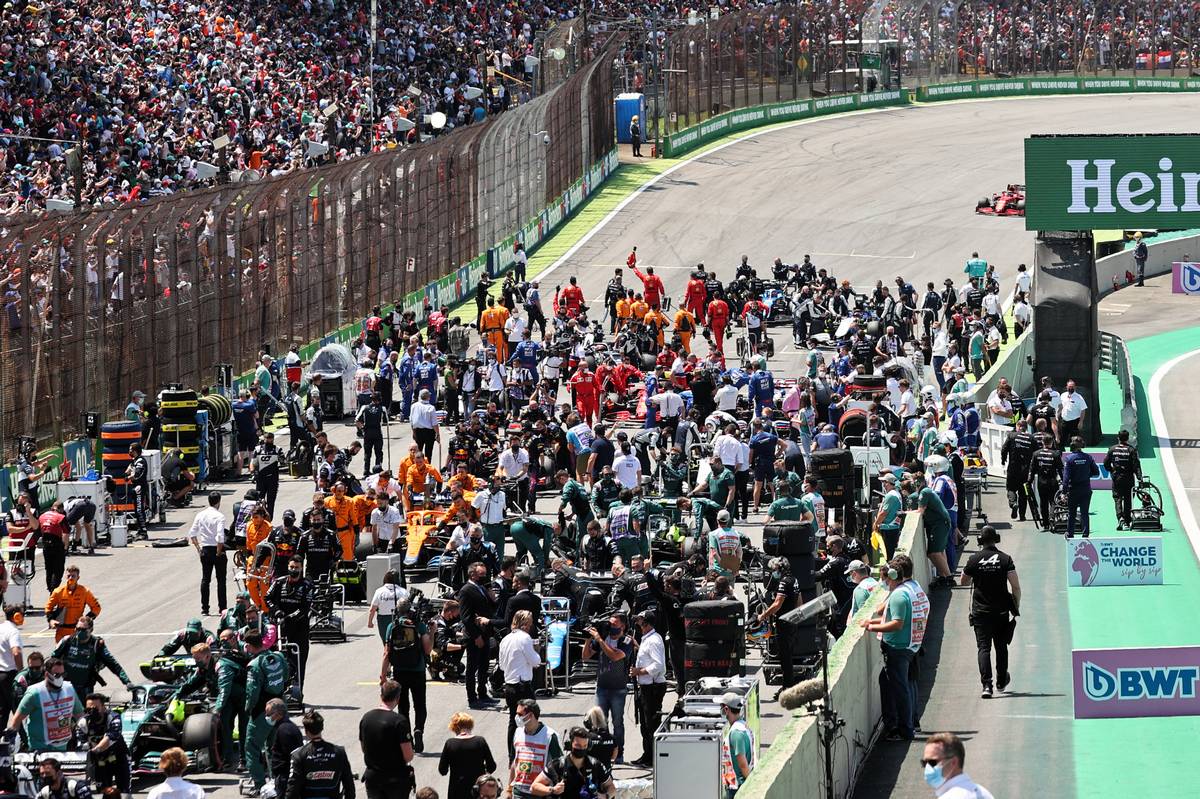 Sunday in Sao Paulo turned out to be a lot brighter than the weekend had been so far. With no chance of rain, mainly blue skies allowed the sunshine to heat things up nicely in advance of the Grand Prix start. With Interlagos track temperatures up over 5C on the previous day as a consequence, any teams that had considered starting today's race on soft tyres rather than mediums had been scared off with only Yuki Tsunoda rash enough to accept the dare.

"Everyone will have issues with overheating, initially it's a bit hotter but it will cool down later," predicted Mercedes driver Valtteri Bottas, who had used softs on Saturday to steal a march on Red Bull's Max Verstappen and capture pole for the GP. Carlos Sainz had similarly benefitted and climbed to third place ahead of Sergio Perez and Lando Norris. Lewis Hamilton's sprint race recovery charge had been on mediums, and he was lining up in tenth while the back of the grid belonged to the two Haas drivers Mick Schumacher and Nikita Mazepin as Kimi Raikkonen waited to start from the end of the pit lane after Alfa Romeo changed his rear wing assembly overnight.

A reasonable start for Bottas wasn't enough to prevent Verstappen successfully diving down the inside into turn 1, and while the Finn scrambled to fight back the Finn opened the door for Perez to slice through into second place meaning the Mercedes had dropped two spots in a matter of seconds. With Norris going off having suffered a rear puncture after contact with Sainz, Charles Leclerc got the better of his Ferrari team mate who was in turn left busy fending off Hamilton who was already up to sixth after a spectacular pass on Pierre Gasly had capped a busy first lap for the reigning champion. 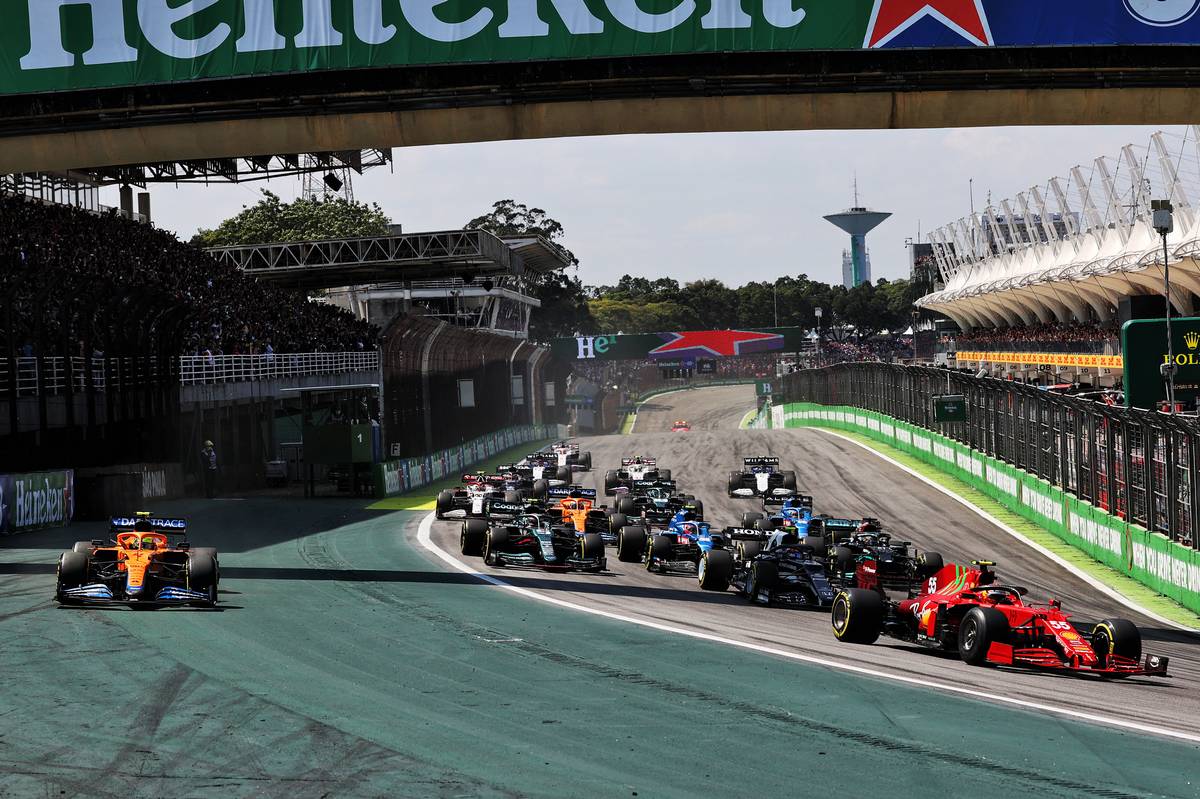 Verstappen and Perez consolidated their hold at the front and started to pull away. Bottas was actually waiting for his team mate to arrive on the scene, Hamilton having dispatched Sainz at the start of lap 3 and Leclerc one lap later to put him into fourth. Sure enough on lap 5 the message came from the Mercedes pit wall to invert position and Bottas quickly complied, putting Hamilton into third by the time a safety car was deployed to enable marshals to clear up debris that had been left on track by Tsunoda tangling with Lance Stroll, forcing the AlphaTauri to pit for a new front wing. George Russell also took the opportunity to pit, the Williams becoming the third car to switch to the hard compound before the restart on lap 10.

The top three played relatively safe when racing resumed, but Bottas struggled to fend off probing attacks from Leclerc. Sainz remained in sixth from Sebastian Vettel with Gasly eighth followed by the McLaren of Daniel Ricciardo who had just got the better of Alpine's Esteban Ocon. Running dead last and limping back to pit lane was Schumacher, who had damaged the front wing of his Haas on the back of Antonio Giovinazzi's Alfa Romeo. That meant another clean up was required, but with the cars already bunched up after the earlier incident it was possible to handle it with a Virtual Safety Car this time. 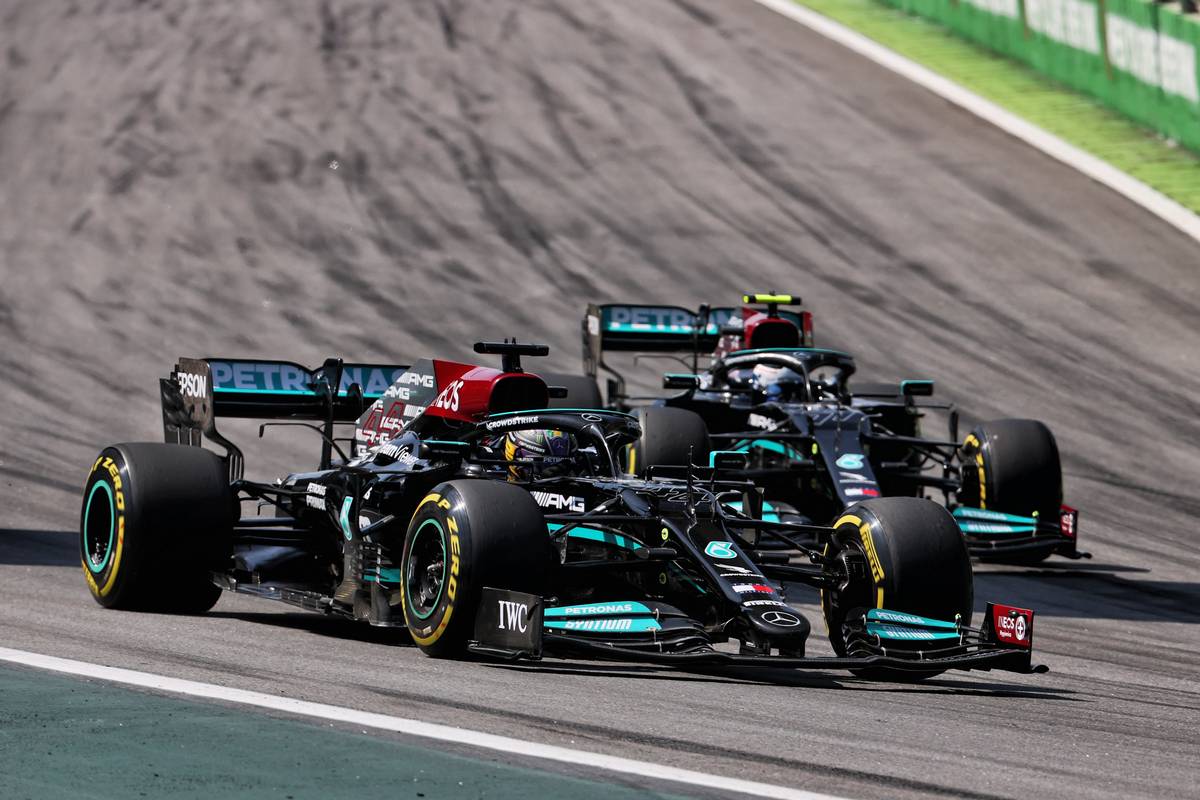 When the VSC ended the Red Bulls were quickly up to speed while Hamilton seemed oddly reticent, but even so he was soon back within half a second of Perez who appealed to the Red Bull pit wall to get Verstappen to drop back to give him the benefit of DRS in his fight against the Mercedes. His pleas went unanswered and at the start of lap 18 Hamilton pulled off an exquisite pass at turn 1 only for Perez to hang on and fight back to retake the position seconds later. Undeterred, Hamilton repeated the move on the next lap only earlier and better, leaving Perez no chance of fighting back this time.

With 20 laps complete, Verstappen's lead over Hamilton was up to three and a half seconds. Perez was already dropping back and was closely pursued by Bottas, Leclerc, Sainz and Gasly, with Ricciardo and Vettel scrapping back and forth over eighth place which finally fell the Aussie's way. Otherwise the race had settled into a brief period of status quo with all eyes on when the leaders would pull the pin on their respective pit strategies and whether anyone could come up with a winning variation. Verstappen was first to report the rear of his car sliding after 24 laps, but he was still comfortably able to stay out of reach of Hamilton who was also reporting waning grip.

Gasly proved the earliest of the top ten to come in for a scheduled first service on lap 26 and next time by it was Hamilton's turn to pit, coming back out on hard tyres in clear air behind Ricciardo and Vettel who were quickly dispatched. Red Bull responded immediately, and Verstappen emerged just ahead of Hamilton. Perez came in the lap after, and both Ferraris also pitted, opting to stay on medium tyres committing them both to making a second stop later in the race. Even for those on the hard compound it was marginal whether anyone could run to the finish from here. For the time being Bottas opted to stay out to assume the lead and potentially play the role of 'roadblock' ahead of Verstappen 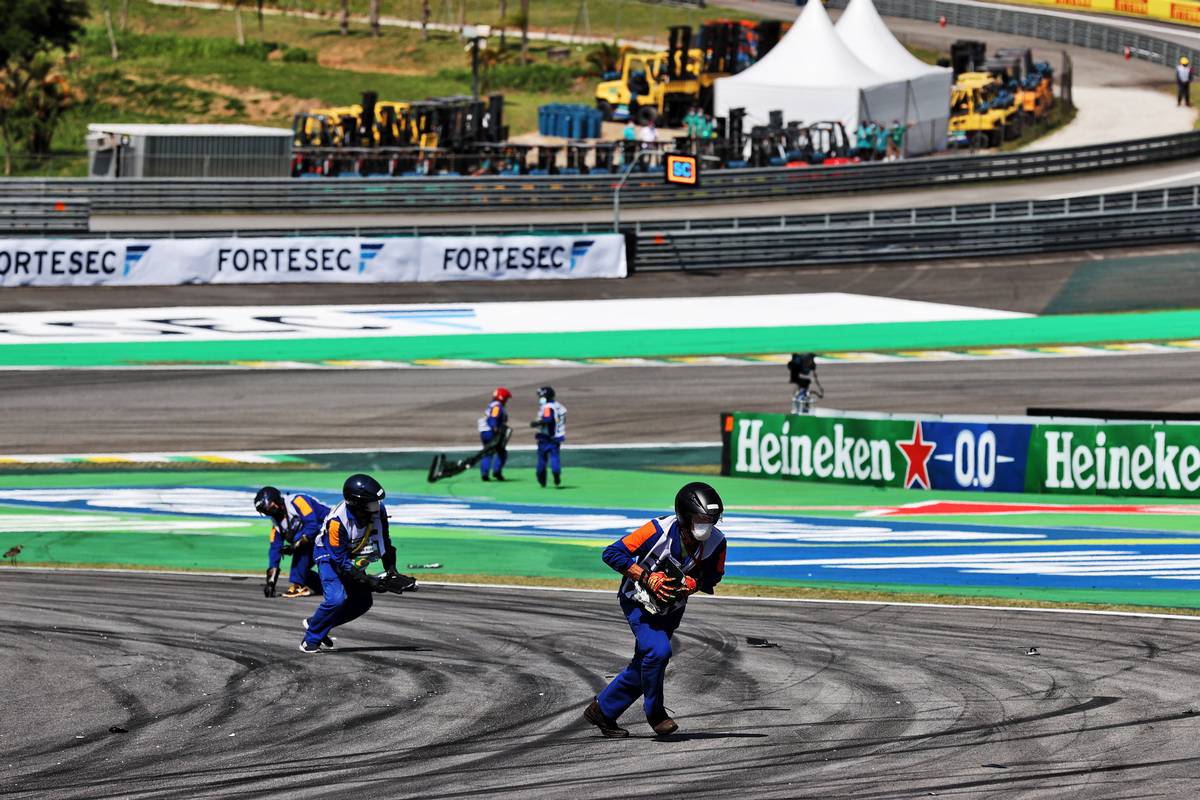 Some more debris dropped on track by Stroll's fatally wounded Aston Martin triggered a new VSC on lap 31, which played nicely into Bottas' hands as he was able to make his deferred stop and emerge ahead of Perez just as the race resumed. The gap between Verstappen and Hamilton was now down to two seconds, and a second stop from Norris - who had originally come in at the end of lap 1 - confirmed that everyone would need a second stop to make it to the finish. Discussions between Hamilton and his race engineer Pete Bonnington on the Mercedes pit wall over which compound to switch seemed to prompt Verstappen to act first on lap 41, although he was slightly delayed on his way out by Williams' Nicholas Latifi.

Verstappen came back out on fourth, with Bottas reacting next lap round forcing Perez to come in on lap 42. Hamilton didn't wait long before also pitting again on lap 44 - sounding less than thrilled to be fitted with a set of the hard compound rather than the mediums he'd requested. As Verstappen retook the lead with 26 laps to go, Bottas also seemed to feel that the team had missed a chance to snatch a 1-2 today, as the strategists tried to explain to their drivers that backmarker traffic ahead of them was against running a longer stint.

It meant that if he was to win the race, Hamilton would have to do it the old fashioned way - by passing on the track while his tyres were still in their prime. Hamilton duly used DRS and the Mercedes' inherent straight line advantage to move into position to attack going into turn 4 on lap 48, but Verstappen didn't give an inch as both cars washed out wide onto the run-off. With Verstappen having essentially pushed Hamilton off-track in his defence, it was no surprise to hear that the FIA race stewards - who had already made one big call in terms of the championship this weekend - had 'noted' the incident. Red Bull were immediately on to race control to argue that the drivers should be allowed to race, and in the end the stewards decided discretion was the better part of valour on this occasion and no investigation was required. Hamilton's reaction when told the news was a succinct: "Of course." 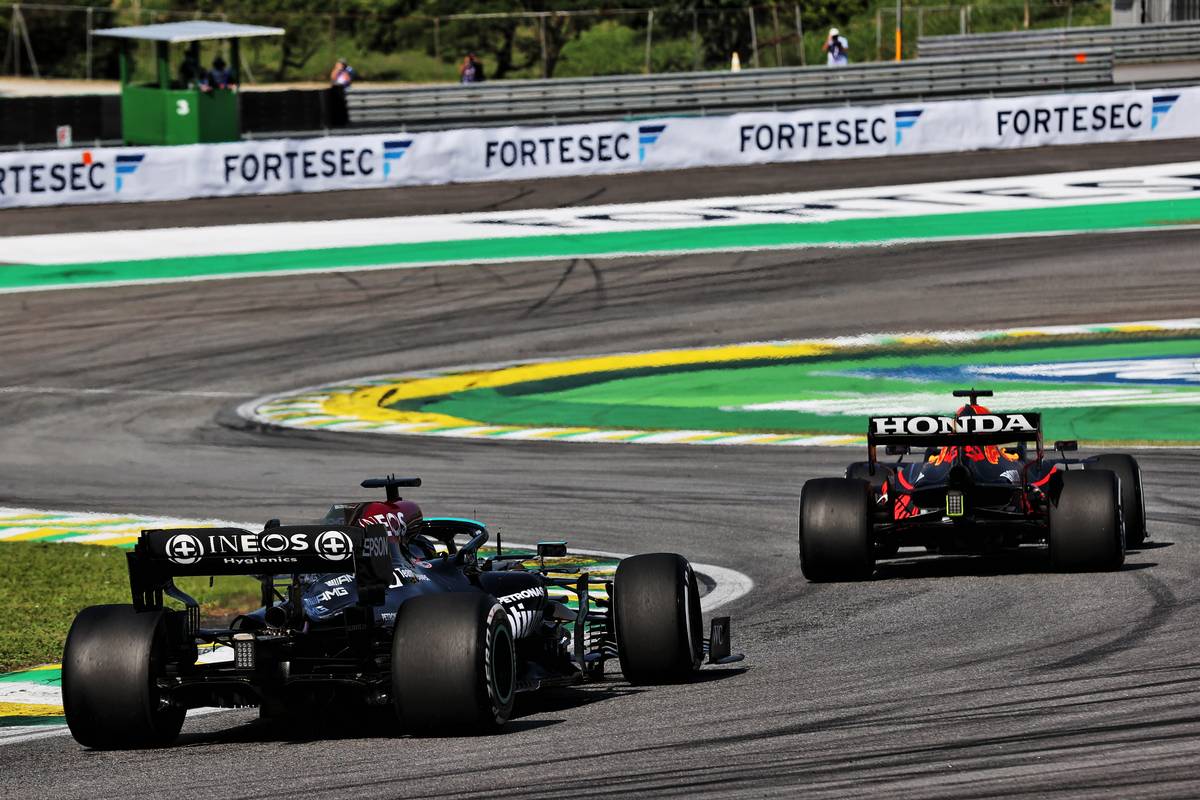 Having bided his time waiting to hear the stewards' decision, Hamilton now remounted his attack on Verstappen. On lap 59, he made his move and pulled off a crushing pass on the straight down into turn 4, this time leaving Verstappen with no room to respond - although the Dutch driver collected a black-and-white driver standards warning for weaving in the run-up to the corner. Now at the front, Hamilton soon pulled four seconds clear while Mercedes urged Bottas to do his best to catch Verstappen for second place in the remaining 13 laps. Meanwhile Perez was deputised by Red Bull to capture the bonus point for fastest lap.

Victory for Hamilton over Verstappen keeps the drivers championship battle very much alive with the gap now down to just 14 points, while third for Bottas over Perez means Mercedes pulls away again from Red Bull with an 11 point advantage in the constructors standings. Fourth and fifth for Leclerc and Sainz puts Ferrari firmly ahead of McLaren for third place in the team points, after Ricciardo was forced to retire with a power unit failure.

Gasly took seventh place with the remaining points going to Alpine pair Fernando Alonso and Esteban Ocon, and to Lando Norris despite his first lap puncture. Just missing out on the top ten were Vettel, Raikkonen, Russell, Giovinazzi and Tsunoda, with Latifi finishing ahead of Mazepin and Schumacher.