The skirmish took place on lap 48 when Hamilton initiated an overtake at the corner on the outside of Verstappen only for the latter to run wide and push himself and the Mercedes off the track.

The incident was investigated by the stewards who ultimately took no further action, a decision Mercedes boss Toto Wolff called "laughable".

"It is two guys running hard and Lewis has got a run around the outside," the Red Bull team principal told Sky F1.

"Max has gone in deep and they have both gone wide, so it would have been really unfair to penalise on that.

"If it was the other way around, I would have let my sporting director have a moan about it but I wouldn't have expected anything from it." 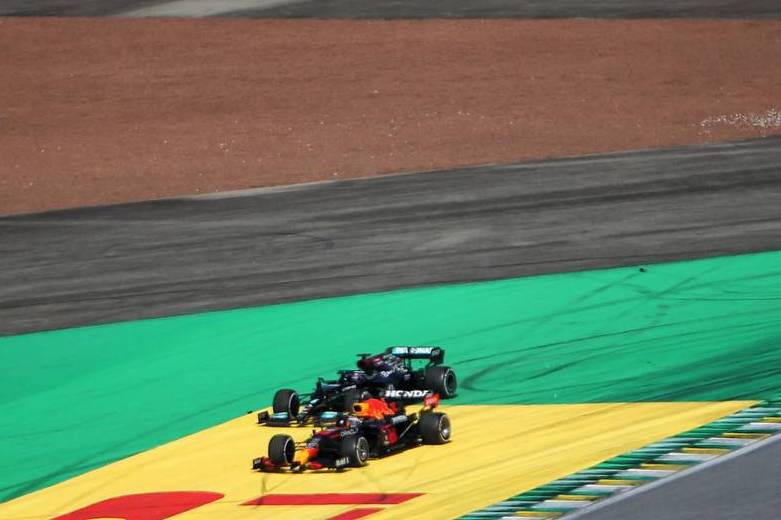 When suggested that the move by Verstappen appeared to warrant a penalty, Horner argued that there had been no contact, so the stewards had made the right call not to sanction his driver.

"Penalty for what?" Horner said. "There is no advantage gained and no contact that has been made. I think it is just hard racing between the two of them.

"I think actually the stewards made the right decision on that. We have talked about this many, many times about the let them race mentality, and I think they made the right call today."

Horner added that the high stakes in the championship mean that hard and tough racing between F1's two leading protagonists is inevitable.

"With Max, he is going to race hard and Lewis is exactly the same," said the Briton.

"That is two guys fighting for a world championship so it is going to be tough racing. But I think it was fair and there was no contact and they recommenced it a few laps later."