F1 commercial rights holder Liberty Media cited two races held during the first three months of the year and growth across all three of its primary revenue streams - race promotion, media rights and sponsorship - as the main drivers of revenue.

"Throughout 2021 and particularly in the first half of the season, attendance at races was limited due to the pandemic, and the Paddock Club did not operate in the first half," F1 stated in in quarterly release.

"F1 does not expect its results in 2022 to be impacted by such capacity limitations, though fan attendance continues to be assessed by relevant government authorities on a race-by-race basis."

F1 chief executive Stefano Domenicali said: "We've had a phenomenal start to the 2022 Formula 1 season, building on our momentum from a successful 2021.

"The new cars and regulations are delivering as we had hoped, enabling closer racing, more overtaking, battles through the field and thrilling results.

"Our events are attracting growing audiences both in person and across all our platforms. We were pleased to announce multiple new sponsors around the start of the season, especially in the technology space.

"We are thrilled to debut the Formula 1 Miami Grand Prix this weekend!"

Hamilton on jewellery ban: FIA should have 'bigger fish to fry' 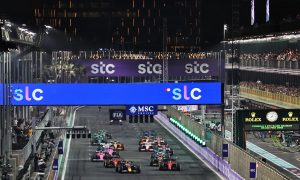