Envision Racing's Nick Cassidy completed the top three after Vandoorne's teammate Nyck de Vries was demoted from third to sixth after receiving a five-second penalty for his excessively robust defense of the final spot on the podium. 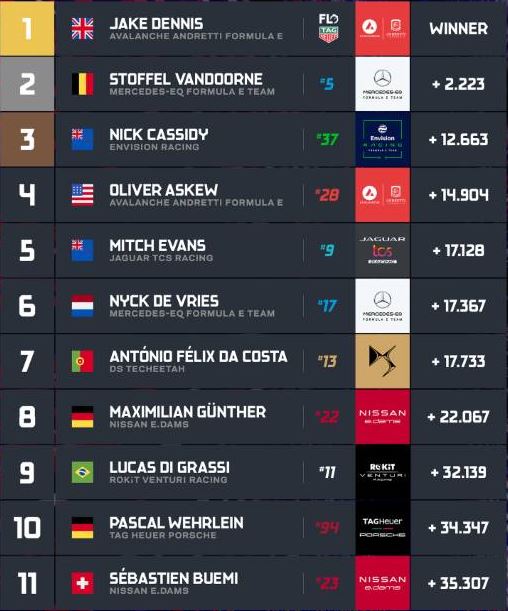 Dennis was forced to contend with an incisive Vandoorne from the outset, but the Andretti charger held his own at the start.

The first lap commotion saw a contact between the Jaguar drivers with Sam Bird suffering terminal damage. But Edoardo Mortara was a collateral victim of the melee, the Swiss driver forcing to pit to replace his damaged front wing.

A charge by Dragons' Sergio Sette Camara allowed the Brazilian to overhaul de Vries for third while further back, another inner-team tussle between DS Techeetah's Jean-Eric Vergne and Antonio Felix da Costa resulted in a contact and both drivers losing ground.

Robin Frijns was the first driver to indulge in the first of two Attack Modes which were worth a 13% power boost for six minutes, but multiple activations followed thereafter. 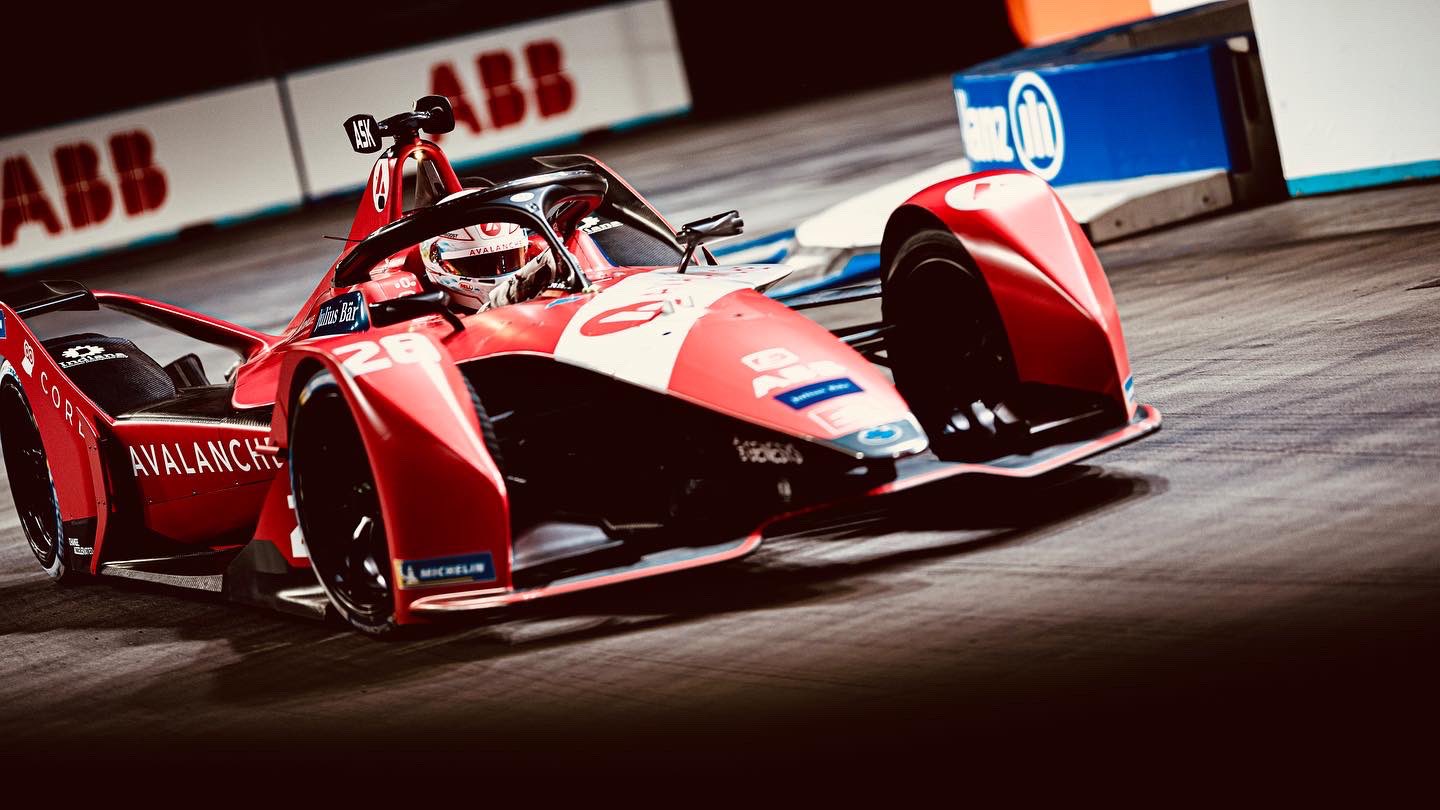 However, Dennis, Vandoorne, Sette Camara and de Vries delayed their boost of energy by one lap but charged up all together.

Subsequent Attack Modes between the top four were spread over two laps, but by lap 17, Dennis and Vandoorne were not only charged up for their final stint but also in charge.

Inside the final 10 minutes, plus one lap, the leading pair, running close to each other, had things firmly under control, with de Vries in third and Cassidy now in fourth position.

On lap 31, Evans pulled out the stops in a bid to limit his points loss in the Drivers' standings to Vandoorne. The Jaguar driver dispatched Sette Camara, Oliver Askew and Max Guenther to snatch fifth at the end of the day.

Meanwhile, the fight for third between de Vries and Cassidy saw the Dutchman forcefully defend his position, to the point where he also forced his rival wide, a move that was frowned upon by the stewards. 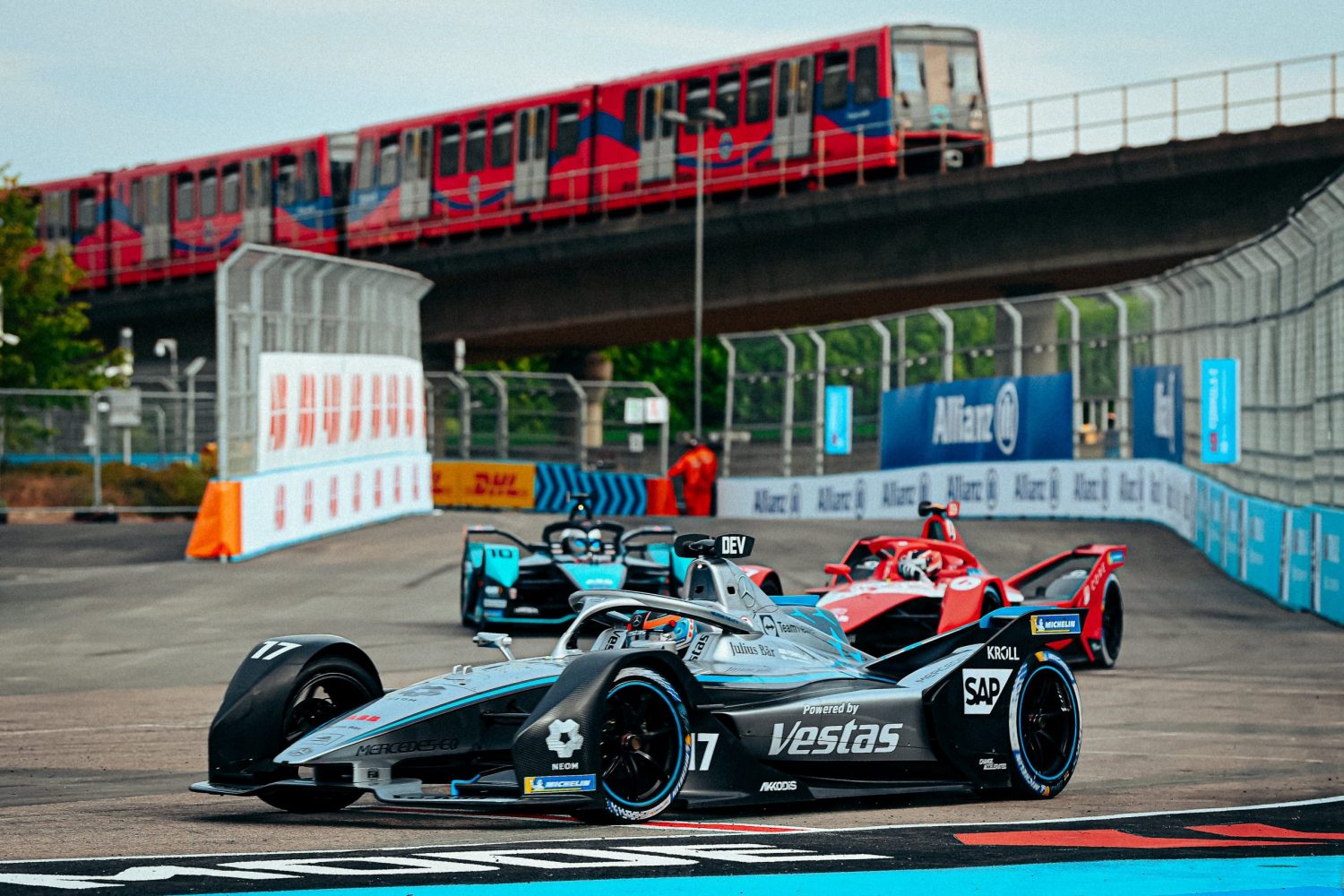 But up ahead, local hero Dennis took the chequered flag while Vandoorne played it safe, happy to settle for a productive runner-up spot that yielded good points.

De Vries crossed the finish line third on the track, but a time penalty levied upon the Mercedes charger for his muscled move against Cassidy a few laps earlier dropped him to P6 in the final results.

Vandoorne extended his lead in the Drivers' World Championship to 26 points over Evans, with the Belgian's efforts also benefitting Mercedes EQ which stretched its advantage in the Teams' running to 37 points over DS Techeetah.

A thriller in London!

It was a home race win for @jakedennis19, whilst out of the top four, only @svandoorne was able to pick up a podium place.

Head over to our YouTube channel to watch the FULL race highlights!

Teams and drivers will regroup overnight and then start all over again on Sunday for round 14 at the ExCel.

Alonso bracing for long race with 'out of position' cars