Singapore's Marina Bay street circuit is a slow, bumpy and twisty track where straight-line speed is not among the venue's most important factors.

While the circuit offers drivers an entire panoply of challenges, Marina Bay's 5.063 km layout that features 23 corners puts the emphasis first and foremost on a car's balance and traction.

The fact that maximum velocity is a secondary consideration is reflected in the less than 9 kph top speed spread between the fastest and slowest contenders in qualifying.

Unsurprisingly, as has often been the case this season, the bulls topped the speed trap readings on Saturday evening, with Max Verstappen charging down Ruffles Boulevard at 287.4 kph, or just 2 kph faster than poleman Charles Leclerc.

The jury is still out as to whether drivers will be spared a deluge from the skies on Sunday, but should it rain, and if DRS is not activated, Red Bull's slightly superior top speed could come in handy for Verstappen, especially as the Dutchman, who could mathematically seal the title at Marina Bay, will be starting only P8.

As for possible race strategies, the quickest way to the checkered flag is a one-stopper, medium-to-hard option according to Pirelli, although a short opening stint on the softs followed by a longer run on the hards is a very close second quickest option. 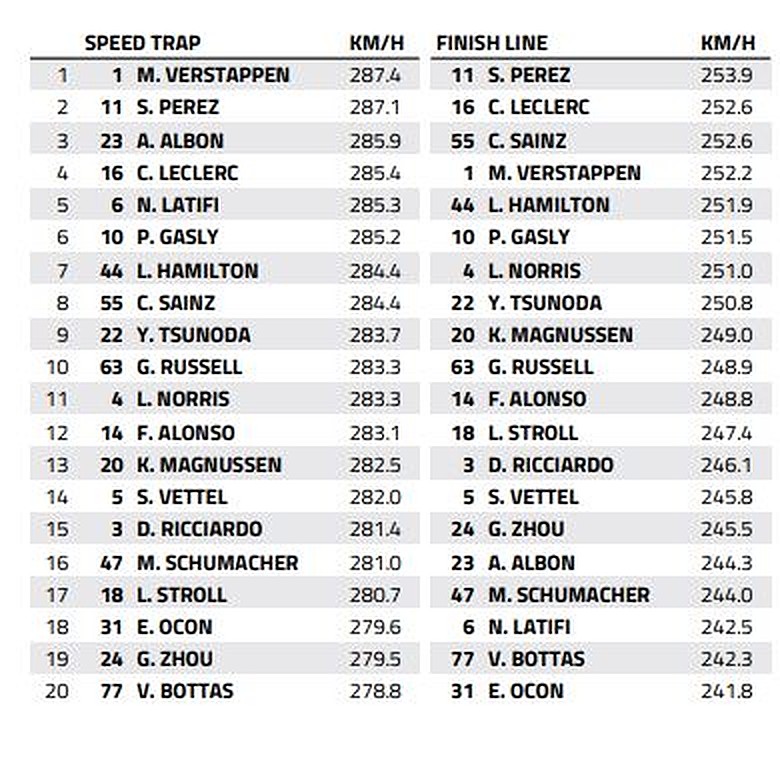