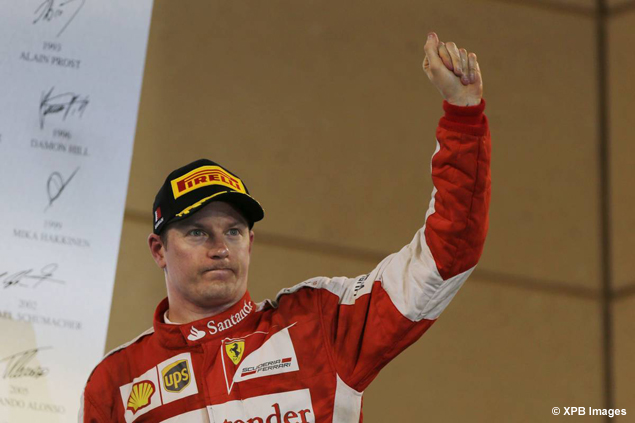 It was a great pleasure to see Kimi back on a podium, twenty five races since his last one and six years since his previous top 3 finish dressed in red (Italian GP 2009).

Last weekend we saw the good old competitive Kimi, aggressive and incisive, especially at the start, when he got the measure of Nico Rosberg for a few laps. Thereafter, he followed the team's sound strategy - albeit reluctantly perhaps - which called for the soft tyres to be used in the latter part of the race when those in front were running the medium compound (further back, Fernando Alonso also followed a similar strategy). Between laps 41 and 46, Raïkkonen reduced the gap with Lewis Hamilton's Mercedes by 10 seconds and closed in on Rosberg. Contrary to the misfortune he encountered in the previous races (with a wheel nut problem in Australia and a flat in the opening laps in Malaysia), Kimi had luck on his side when he got past Rosberg two laps from the end as the Mercedes suffered a brake problem.

Between laps 41 and 46, Raïkkonen reduced the gap with Lewis Hamilton's Mercedes by 10 seconds

As everyone knows, I've had a soft spot for Kimi ever since I was his track engineer during his maiden F1 season. His return to form not only makes me happy, but it also proves that his low performance level last year was mainly due to the fact that he never got to grips with Ferrari's F14T, with its unpredictable front end.

On the other side of the Scuderia's garage, Sebastian Vettel really struggled in Sakhir, and especially with the car's rear end, perhaps because we was overdriving a bit. That didn't deprive him of enjoying good race pace however, although not when it counted, as his second best fastest race lap proves. For Kimi, it was his 41st fastest lap which not only proves the Ferrari is competitive, but puts the Finn on a career par with Alain Prost, and behind Michael Schumacher who historically remains the best with 77 fastest laps.