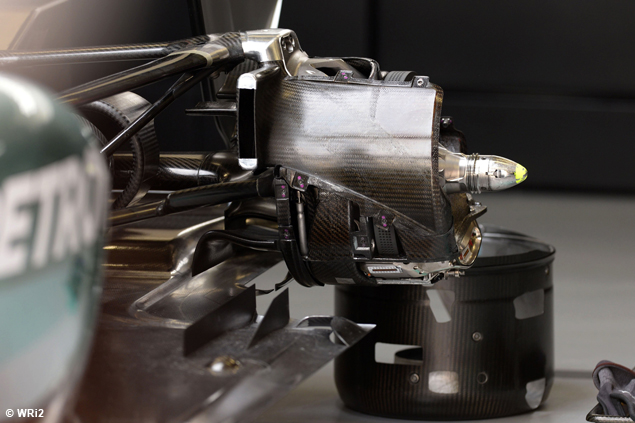 In the closing laps of the Bahrain Grand Prix, both Mercedes W06s suffered near-simultaneous brake-by-wire failures, the cause of which was mainly attributed to set-up changes to the cars of Lewis Hamilton and Nico Rosberg which put an extra strain on the brakes and compromised the entire system. F1i takes a closer look at the technical intricacies of the brake-by-wire concept and how it operates.

Along with the introduction by the FIA in 2014 of the new 1.6-litre turbocharged V6 'green' engines, the technical regulations also included a new rule allowing teams to use electronic brake assistance on the rear wheels for the very first time. The purpose of this evolution found its reason in the considerable increase in harvesting demands of the energy recovery system (ERS) as well as its increased performance.  While F1 cars have used fly-by-wire for throttle input since 1992, the good old brake pedal remained until very recently mechanically linked to the master cylinders and, ultimately, to the front and rear brake calipers. The front brakes still operate this way, but the rear brakes are now electronically controlled in a manner which assesses how much brake pressure a driver has called for in order to slow the car in a consistent way while ensuring the maximum energy harvest for the ERS. 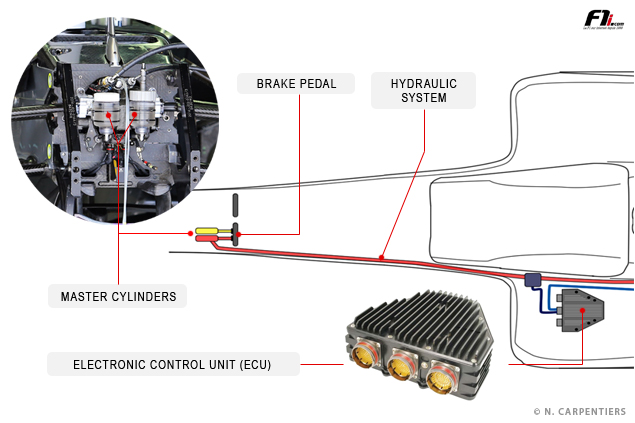 A car's brake pedal is connected to two master cylinders, one which is linked to the front calipers and the other to the rear. The master cylinders simply convert non-hydraulic pressure, typically induced by a drivers' foot,  into hydraulic pressure. The incompressible hydraulic fluid is distributed to the calipers by Aeroquip piping, exerts pressure on a cylinder which then pushes the brake pads towards the carbon fibre disc in order to slow a car down.

In 2009, a kinetic energy recovery system (KERS) was added to F1's conventional braking system. It featured a device connected directly to the drive shaft through a motor-generator that, under braking, driven by the same shaft, converted kinetic energy into electrical energy. Until  2013, the KERS system allowed drivers 6.7 seconds of power from the 60kW unit which offered 400kJ of usable storage. A dial on the steering wheel enabled the driver to set the rate at which the KERS unit harvested and stored its energy.