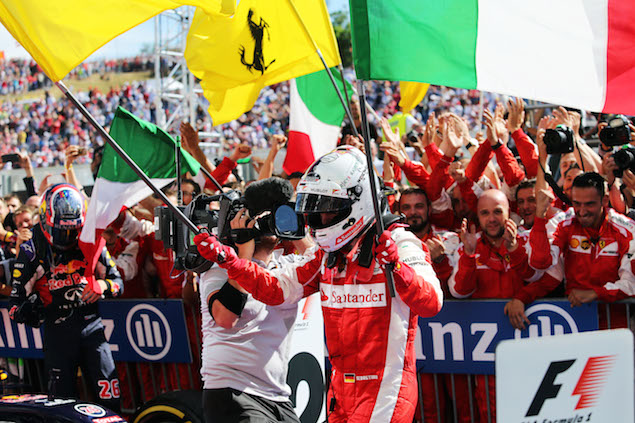 Sergio Marchionne, Ferrari Chairman: “We dedicate this victory to the memory of Jules Bianchi, a fantastic guy whom we all miss terribly, Unfortunately, today in the end, we were unable to celebrate a one-two finish which was within our grasp because of a problem with Kimi’s car. That’s a clear sign we must never drop our guard. We will continue to work on closing the gap to those ahead of us, but without ever ignoring the reliability factor. We will soon be pausing for the summer break, after which I’m sure everyone in the Scuderia will return even more ready and determined than ever.”

Sebastian Vettel: “It has been a week with a lot of ups and downs and as I said after the race I dedicate this win to Jules and his family. The race was difficult especially at the end with all the thoughts coming through my mind but for sure I’m very happy with the result. Our race was very strong from the beginning, we had a great start and after that we had great pace and were able to control the race. Of course the safety car in the end was not helping us, but we still managed to stay on top and win the Grand Prix. It was fantastic to see all the guys of the team around as I looked down from the podium, they were all very happy. Today we proved that the pace we showed has nothing to do with luck. In fact, if anything we were a bit unlucky with the safety car, but our pace on the Prime tyre was really good so we kept pushing and still managed to come out on top and never allowed the people behind to come into the range of DRS. For sure it was a great race from all the guys and a great recovery from Friday, especially after we had heard strange rumours about the team facing a crisis… Thanks to all our partners for their support and to Shell for helping us with more power”.

Kimi Raikkonen: “It’s a shame what happened today in the race, but when you have no luck you have no luck, we did our best today. The start was really good for both of us, probably the best since the beginning of the season; we had good speed and were able to pull away and stay in front. The speed was always there today and I was expecting to push right to the end, but at one point I heard something strange in the car, the sound was getting different and then got worse and worse. We tried to fix it but it was not possible so I decided to retire. As a team we had a pretty good day with Sebastian’s win, but I think that we deserved a better result today, more than just a win. Without my problem we could have got a one-two finish very easily but things seem to always go in the worst possible way. Overall in the first part of the season we had the speed but it has been a bit unlucky. There was always something dictating the final result of the race quite badly. The most important thing now is to get rid of all the problems, we’ll keep pushing and hopefully luck will turn on our side and we’ll get what we deserve.”

Maurizio Arrivabene: “A fantastic win! Over the past few weeks, we had had comments from people who said we were in a slump, people who obviously can’t or don’t want to read the numbers. As a matter of fact, we had anticipated long time ago that there could be ups and down in the course of the season, but that does not mean that we were stepping back. This weekend started with a horrible Friday for us, so we knew we only had P3 on Saturday to properly set the car up. We calmed down and managed to recover, but still we didn’t know we could win the race. We were only confident that we could fight at the front. Then both Seb and Kimi had a tremendous start and being able to drive in clean air surely made a difference in terms of tyre management, as we knew the first two sets of Options would perform very well. I am very disappointed, though, that Kimi din not make it to the end, because he was having a great day. Congrats to him. This is Formula One and we must accept the lack of reliability as another challenge for the future. We won today, but still keep our feet on the ground and remain humble and committed”.