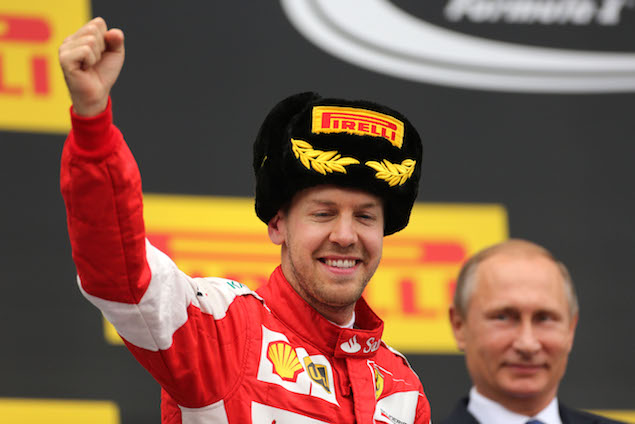 Sebastian Vettel: “Overall I am very happy. It was a great day, a great race and I felt really good in the car. In particular I am very happy for the Team, they have done a great job, after the lacking practice the days before. My start was not so good, I struggled a little bit, but as the race went on I fought my way to the front. After the safety car came in I could overtake Kimi and start the hunt for Williams. As for my fight with Kimi, first of all I think we both enjoyed the battle that since it was still so early in the race, it was right to let us fight to provide some excitement. In the end I was just able to finish my race. Lewis deserved the win, but we were maybe closer than some had expected.”

Kimi Raikkonen: “All through the race the car was behaving well, especially after the pit stop, but then I was stuck behind other cars and had no speed on the straight, so it was hard to get past. In the final stages, I tried to overtake Valtteri in the same place I had passed him earlier in the race, I had a good run in turn 3 and in the next one there would have been enough space, so I decided to go for it. I don’t know if he was not expecting me at all or if he did not see me, but once I decided to go there was no way I could back off. I tried to turn inside as much as I could, but there was no way to go and in the end we collided. It is an unfortunate thing for us and for them, nobody want to have an accident even if it’s part of racing. It’s really a shame, but my move was based on a good chance and not something completely crazy.”

Maurizio Arrivabene: “Once again, as I said many times before, I was impressed by Seb’s skills. He proved to be a good asset for the team and he shows at every race what a great driver he is. He drives a very good car, that’s for sure, but he can add that little extra that is a champion’s trademark. As for his battle with Kimi in the first stages of the race, our drivers are well aware that the team has its rules of engagement: so it was a nice fight between two great drivers. Our race strategy was the right one, congratulations to Iñaki Rueda: if Kimi had managed to get past Bottas in the final round, that would have further shown that we were on the right tactics. It’s up to the Stewards to decide on the accident they had, but to me it clearly looked like a normal race episode. Now Seb is running second in the Drivers’ standing and, mathematically, the race to the championship is still open: but our humbleness says this is not the case. So, as a priority, we have to work race-by-race to consolidate our current position”.