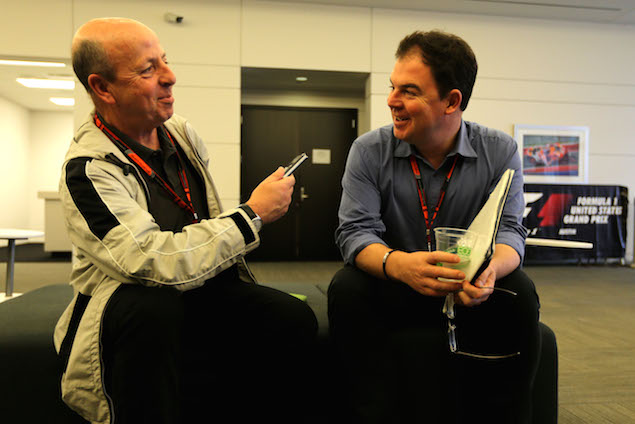 I think what people really ought to know about you, never mind all the commentary, is your glorious career as a rock star in the Pitstop Boogie Boys.

No seriously. Run us through the Pitstop Boogie Boys.

When I was at university, and since I was a teenager I played the guitar and used to sing.

I should add for the readers that you’re the biggest Beatles fan in the entire universe.

I’m quite a big Beatles fan, but also like a lot of other things. So yeah, in 1991, I was working with Brabham and there were a few guys there and a few other guys that they knew who all played a bit and I can’t remember where the original idea came from but we thought it would be quite fun to put a scratch band together, playing RnB sort of stuff. So we put a scratch band together and Alan Woollard (now Formula 1’s freight maestro) thought this was terrific.

He got a music shop in Cascais (the nearest town to the Estoril circuit, home to the Portuguese GP) to bring a PA system, guitars, drums, keyboards - all sorts of things, and set it up in a square in the town and we hadn’t even practised. We just got up there and decided what we were going to sing, what key we were going to play it in. I sang and played the guitar.

We had a guy called Danny Baker, who was a trucky at Tyrrell. Ginger Baker from Cream was his cousin, and he was a bloody good singer and good harmonica player. There was a tyre fitter from Goodyear who was a very good lead guitar player. Chris Dinnage who was number one mechanic on Johnny Hebert’s car at Lotus, was a very good guitar player. And a guy called Eddie Taylor who had been a stand-in drummer for Slade in Birmingham when they were in their early days was a truckie at Yamaha and he became one of the real driving forces of the whole thing. And I think Eddie Jordan dropped in and had a bit of a go on the drums and he was very out-of-time in those days. 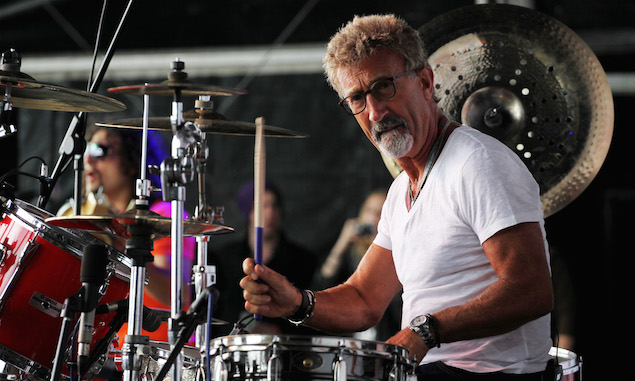 You mean he’s got better?!

He got a bit better when he had his own Eddie & The Robbers. I think he had some lessons. But Leo Sayer was at the Grand Prix and he turned up and we played as backing band for Leo Sayer in the main square in Cascais. And of course Woolly (Woollard) had let everybody know what was going on so there were thousands, well, hundreds of people in the square. About half of them were Formula 1 people and half were quizzical Portuguese.

It took off from there and we played a bunch of gigs in Australia and Japan. We played at the famous Log Cabin. We played several gigs in Australia, but the high point for me in my last gig was McLaren’s end-of-season party in Adelaide in 1991. [Ayrton] Senna had won the World Championship and Ron Dennis asked us to play and I said, “We’ll do it as long as Ayrton gets up on the stage and sings with us.” He said, “Well, I can’t guarantee that but I’ll ask him.” So he asked him and Senna was at that point chatting up Elle Macpherson right in front of us. Apparently he was about to whisk her off in his jet to some island. I don’t blame him for not wanting to sing with us, standing on the stage with a bunch of hairy-arsed loonies like us.

Formula 1 people, massive, massive names, just having a really good time and letting their hair down

But [Michael] Schumacher got up on stage and sang Sweet Home Chicago with us, even though he’d never heard the song before in his life. He was off his box. He was so drunk, in stonewashed jeans with a mullet haircut. And Ron Dennis was wearing a pair of Ray-Ban sunglasses and singing as well. It was a snapshot that I’ll always have in my mind for the rest of my life, Formula 1 people, massive, massive names, just having a really good time and letting their hair down.

You mentioned George Goad, who used to play congas for Frank Zappa. He was playing congas with us that night and he persuaded the percussionist from Paul Simon’s band (because he was playing the gig at Adelaide that year) to come and join us and at one point, we were playing with this professional percussionist and he was playing George’s congas and the whole thing was totally surreal. Someone suggested the other day we should get it going again but I’m 25 years older and I don’t think it would work

And it was of the moment, wasn’t it?

Yes and nobody wants to see a 48-year-old rocker on stage.