F1i technical expert Nicolas Carpentiers takes you behind the scenes of Formula One and provides you with exclusive images of this year’s hybrid 1.6-litre V6 turbocharged power units. After Renault and Honda, the third chapter in our series is devoted to Ferrari’s 059/4. 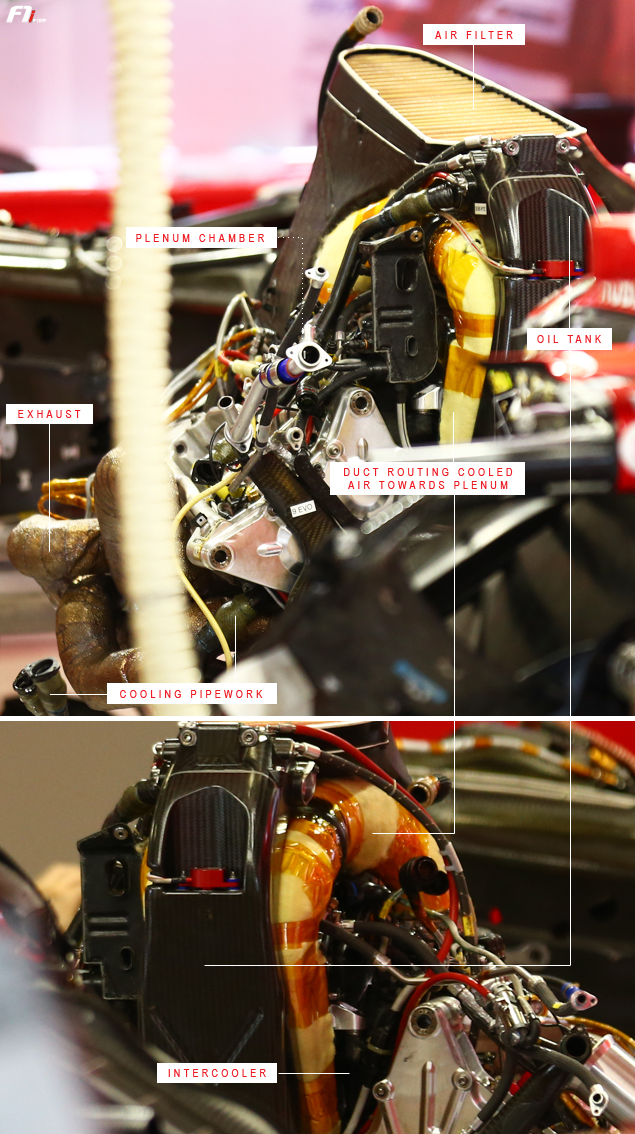 GOING BACK TO THE ROOTS…

Formula One can be seen as a schizophrenic sport, always striving to move forward and drawing on the brightest minds and most sophisticated technology in order to... go around in circles as fast as possible. Last year saw F1 reconnect with its past; after seven years of frozen development in the normally aspirated V8 era, the engine became crucially important once again. The pinnacle of motor racing had gradually turned into a one-dimensional sport with performance relying almost exclusively on aerodynamics. F1’s big hitters thus devised a new formula that aimed at finding more balance between aero, engine, V6 integration within the chassis, energy recovery, etc. Except that engine performance has simply become the new name of the game.

Granted, engine engineers have been put in the spotlight once again but the new technologies are so young and ground-breaking that it immediately created big gaps between the power units. Manufacturers were initially supposed to homologate their units before the start of the 2015 campaign, but this changed when Ferrari and Renault found a loophole in the technical regulations and the FIA allowed in-season engine development. Still, playing catch up with Mercedes, which has been the clear benchmark over the past two years, remains extremely difficult. This looked like an even taller order for Ferrari coming off its worst campaign in over two decades, but the revered Italian outfit managed to make some in-roads into Mercedes’ advantage. In order to achieve such feat, Ferrari head of engine operations Luigi Fraboni explains that Maranello’s power unit was given a complete overhaul last winter.

“We started with last year’s engine [the 059/3] as a basis, but we developed it to a much better product,” he is quoted as saying by Racecar Engineering. “But we realised there were others better than us so we reworked everything.

“A big effort went into combustion, we looked at the turbo, getting the most out of the energy recovery and we did a lot on the oil system. We looked at better knock control too, and we had to get better correlation between the software and how the engine worked in reality. In the end, we ended up with basically what is a completely new engine.”

Changes are not visually striking, save for the oil tank being placed at a different place. On the 2014-spec F14 T, it was positioned at the back of the internal combustion engine [ICE] and sat within the gearbox casing, right above the MGU-K. That installation used to be commonly used… before 1998! This year, the oil tank occupies a more traditional spot, namely between the chassis and the engine. Such assembly improves the package’s centre of gravity and allows for shorter and lighter pipework. The oil tank is separated from the engine when the latter features a dry pump system. F1 cars have elongated oil tanks, as this shape is better suited to cope with centrifugal forces in the corners.