Given the planned overhaul looming ahead of 2017, the 2016 F1 technical regulations remain fairly stable. Therefore, don’t expect to see major differences on the cars that will take to Circuit de Barcelona-Catalunya for pre-season testing next month. But they will still sport a few novelties, as required by the slightly updated rules. F1i technical expert Nicolas Carpentiers provides you with explanations of what changes on the technical side of things this year. 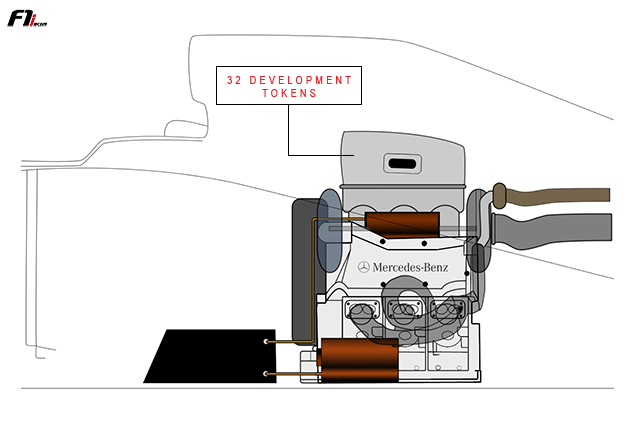 In appendix 4 of the technical regulations, the FIA has broken down the 1.6-litre V6 turbocharged power units into several categories, which encompass functions like “combustion”, “ignition system”, “valves”, “upper/lower crankcase”, “MGU-H”, “MGU-K”, etc.

Each individual component has been given a value, oscillating between one and three tokens. For instance, both the compressor and turbine inside the turbocharger are worth two tokens, while the exhaust flanges going from the engine to the turbine inlet only weigh one. Similarly, tweaking the oil pump will cost you one token whereas modifying the ancillaries drive requires three. The entire power unit is ultimately made up of 66 tokens.

Engine manufacturers – save newcomers Honda – were granted 32 tokens to upgrade their units last season. While that number was initially bound to decrease over the years, a change to the system was ratified following a meeting of the World Motor Sport Council [WMSC] last December. This means all four power unit suppliers still have 32 tokens available this season, which amounts to 48 per cent of the components. Bearing in mind that revising the compressor costs two tokens, tweaking the inlet plenum chamber is worth three tokens, and replacing and re-positioning the MGU-H needs four tokens, constructors still have sufficient leeway to give their engine a major overhaul.

Moreover, several restrictions (areas of engine that were blocked off from any development: air-valve system, valve drive, crankcase) have been removed, so that engine manufacturers are free to choose on which area they want to focus to make improvements.

The new token system and greater flexibility were devised in order to enable the manufacturers that are currently struggling, i.e. Honda and Renault, the opportunity to catch up more quickly.

As was the case last year, in-season engine development will be allowed again. What’s more, Appendix 4 of the latest sporting regulations states: “any manufacturer who homologated a power unit during the 2014-2020 period may also apply to the FIA to re-use such power unit in a given team, to the same specification, and without going through the re-homologation process.” This has paved the way for Ferrari to provide Toro Rosso with year-old engines. Previously, no constructor could supply more than one specification of its power unit.

Finally, homologated sensors measuring the pressure and temperature of the fuel supplied to the injectors must be fitted, in addition to the fuel flow sensor (Article 5.10.4).

Suspicions by the FIA regarding a potential technical breach arose after last year's Spanish Grand Prix, when the sporting authority believed that Mercedes and Ferrari might have been collecting and storing fuel beyond the flow meters in order to gain a power advantage. Although both teams were cleared of any wrongdoing, the new provision ensures deeper monitoring, as the signal of the two sensors must be supplied to the FIA data logger.

What happens on any given F1 Saturday?