If you’re a Venezuelan motor sport fan, chances are you will remember the 2012 race here in Barcelona and the podium ceremony that followed, because for the first time in the history of the sport, a Venezuelan stood on the podium and the top step of it to boot. The much maligned Pastor Maldonado was the driver in question and he did it at the wheel of a Williams. A great day for the team, although the only problem with it today for the men and women of Grove is that there hasn’t been another victory since. So, when I sat down for breakfast with Deputy Team Principal Claire Williams, we got the difficult topic out of the way before de-boning the kippers and slicing the black pudding. 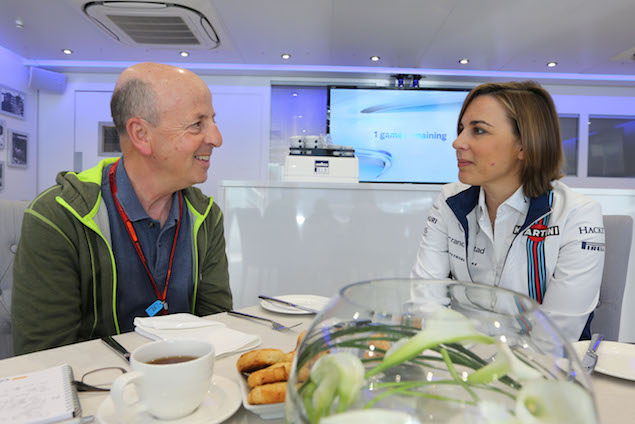 Here in Spain was the last time you won a grand prix and shortly after the race, the garage caught fire in quite a serious way and in my mind, that’s a good metaphor for what Williams is - some great highs and some great lows. I suppose you think that was far too long ago, your last victory.

It was. It’s funny you say that. I always said after that, only Williams could win its first race in - what was it? - a decade, (Brazil 2004, J-P Montoya) and then go and ruin it by setting its garage on fire. It was too long ago but that victory for me personally it had so many different connotations, not just because we hadn’t won a race for a long time, but because we did it commandingly and it was what everybody needed in the team. I wasn’t Deputy Team Principal then; that happened six months later and the victory reminded me how it feels to win and it reminded everybody how it feels to win and it gave the whole team that fresh impetus.

Not having won a race for so many years is so difficult, so to have that refresh I think was good for everybody. It was also the last race that my mum ever came to, so it was wonderful that she was able to experience Williams winning again. Obviously, she also experienced the rest of the year, which was terrible. Today, we’ve got a lot of work to do and we want to feel that way again because it’s such an amazing feeling - winning. It’s addictive, isn’t it? That’s why we’re all here - to win. And as much as a podium is great and the success we’ve had over the past two years has been wonderful and we’ve enjoyed it immensely, we need to win again, that’s what’s missing.

That win came shortly before you became Deputy Team Principal. Did you consider turning that job down?

I thought about it long and hard and actually I did kind of originally. It was all Toto’s [Wolff] idea because it coincided with his offer from Mercedes and he was very much in two minds what he wanted to do and said, “I don’t want to leave unless you would take this job and I know that the team is in good hands.” And I thought, “You’re crazy!” because I never expected anything like that to happen, Eric. I was just the press officer. It was ridiculous almost. 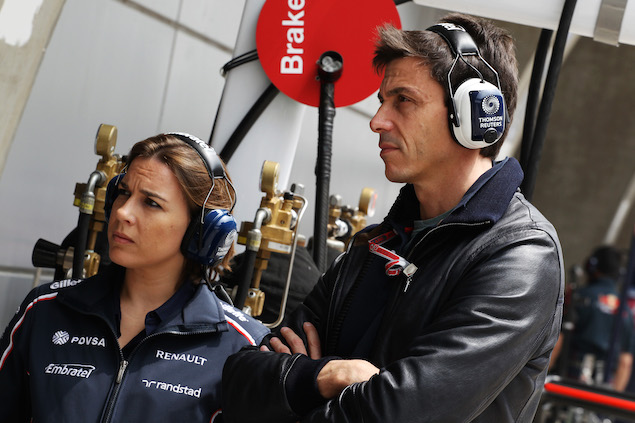 It’s a hugely important role but it’s a big leap. As much as I’d had quite a few promotions in a short space of time from 2010 onwards. I see my dad doing it so I know the level of what it involves, running a team, and particularly for me, being the boss’s daughter and I’m a girl and all that kind of thing and do I really want to sit in a room and fight with Bernie if I have to? Am I capable? Williams is so important to me and I love it so much that I spent a long time weighing up that risk. One of the first people I spoke to about it was my mum. She said, “You have to decide whether you think it’s something that you can do. I think you probably could but I know what it’s like. I know what you have to sacrifice to be a boss” and all that kind of thing.

In the first instance, I definitely thought, “There’s no way I want to do this.” Then I had quite a few people talking to me about it and persuading me and giving me the confidence to believe that I probably could do it and I thought, “If I can bring something, then I’ll give it a whirl.” I’ve always been of the opinion, whenever I’ve been offered a promotion, “If they’re offering it to me then they must believe that I can do it and I’ll give it a shot and if I’m rubbish it at it then I’ll put my hands up and I’ll just slink back to what I was doing” so I thought, “I’ll give it a go and if it works out, great, but if it doesn’t, I’m not going to jeopardise the team if I’m not good enough.”

Having known Frank for a few years, I’d say any accusations that you got the role through nepotism would come from people who don’t know him, because all he’d want is what’s best for the team and if he didn’t think you could do it, you wouldn’t get it. I seem to remember, I read somewhere, he wasn’t keen on you joining Williams in the first place when you were at Silverstone.

He never wanted me to come to Williams and in actual fact, he was the last person on that level to actually know about the role anyway so it was everyone else plotting behind the scenes and then once we were all in alignment, it was only then presented to Frank, who actually rather surprisingly did think it was a good idea, which I was quite taken aback by. You’re right, anyone that knows Frank would know that the last person he would put in his place or working alongside him or whatever, would be a family member.