Catch up with what all the teams had to say following Sunday's Spanish Grand Prix - the fifth race of the 2016 Formula One world championship. 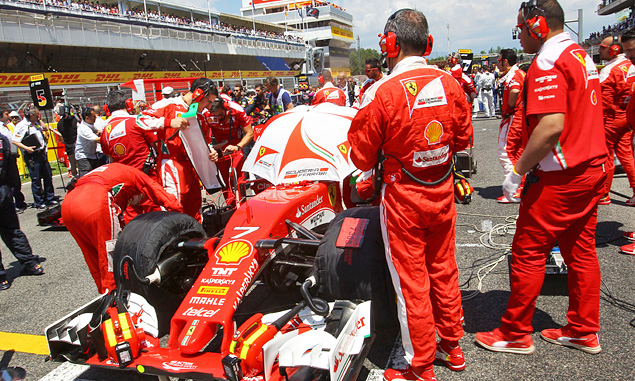 Sebastian Vettel
"Today there was a big chance to win the race, so definitely I was attacking to win, that was what I was hoping for. But that lasted up to the point where I came out after the last stop and I realized the advantage I had, with a set of tires that were a couple of laps fresher, over the guys ahead was practically not there. We struggled on the Medium tires, where Red Bull was strong, and this is the reason why Kimi and I couldn't attack, but we were very strong on the Soft tires. We decided to split the strategies between the two cars: I went for the three stop strategy, then I tried to attack the leader and I succeeded, but in the end both Daniel and myself came out behind the two stoppers. So all in all we were lacking pace, which is something we need to understand. There is nothing wrong with our car, it's good, it works well, and the stuff we brought here seems to work. My congratulations to Verstappen. The first win is one of the best moments you can have, it's something really special. So 'chapeau', Max managed to stay ahead, even if he had a lot of pressure from Kimi."

Kimi Raikkonen
"I had a poor start, with massive wheel spin when I released the clutch. I managed to recover some places in the first few corners and then I caught up with Max pretty easily. The car was ok and the speed was good, but once you are following another car for many laps this doesn't help the tires and I was missing a bit of grip and downforce. It was a struggle to follow him close, I never really had a good run on him out of the last corner because he was really fast there. It's a bit disappointing when you get that close and you don't win, but after a difficult weekend we have to be somehow happy for this result. As a team we keep working as hard as we can and try to get the wins, we keep fighting and when we have difficult weekends likes this one, we have to keep the fight alive and be up there to score points. Max really deserves this win, for me he's not a surprise. He was doing a very good job already last year and today in a better car he was able to win."