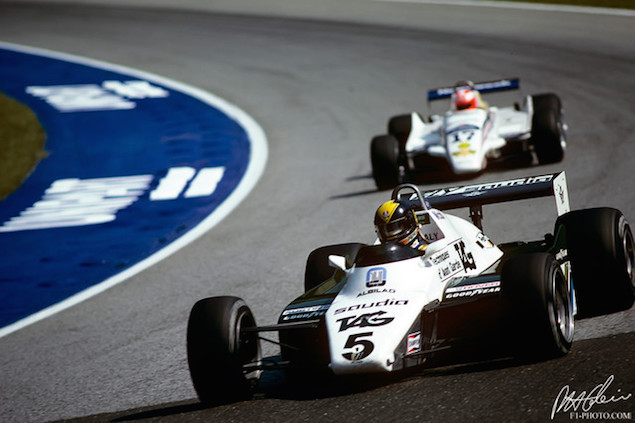 You were team-mates at Williams with Rosberg in ’82 and there’s a story about the only time you out-qualified him.

I never out-qualified Keke except at Dijon, because I missed the left-hander going down the hill, went up the escape road, timed it perfectly to come back out, and as I went by to start the next lap I had just gone quick enough to beat Keke. I stopped, came into the pits. Charlie Crichton-Stuart (Williams fixer) comes over and says, “Man, that was a great lap.” I said to him quietly, “I’m not sure what to do because I actually missed half the circuit to get the lap.” Charlie looks left and right and says “don’t say anything, particularly to Keke.” I think it was only years afterwards that he found out.

1980 is the year that you came to prominence for all the wrong reasons because you had a car with no brakes for a lot of races, and you used other cars to slow down, particularly in Monaco when you landed on your teammate. (Look it up on Youtube).

I remember that crash in HD video in slow motion. I remember it as clear today as the seconds unfolded as it happened and I had good brakes when I got there.

It was on the opening lap coming into the first corner, Ste. Devote.

I’m on the left side of the grid and I had already made my mind up that if I could get to the inside, it would be the safest place to be to go round the inside of the corner through Sainte Devote and up the hill. Patrese is on my right side in the Warsteiner car. He got a bit of a lazy start so I could see a gap beginning to open up. I remember leaves begin to flutter through the air as we all went down to Sainte Devote. As we get to the braking zone, I look over to see is there enough room to just slot in, in front of Patrese, and for that momentary point of concentration to see can I slot in here, to my left side, out of my line of sight Giacomelli had already started to brake. 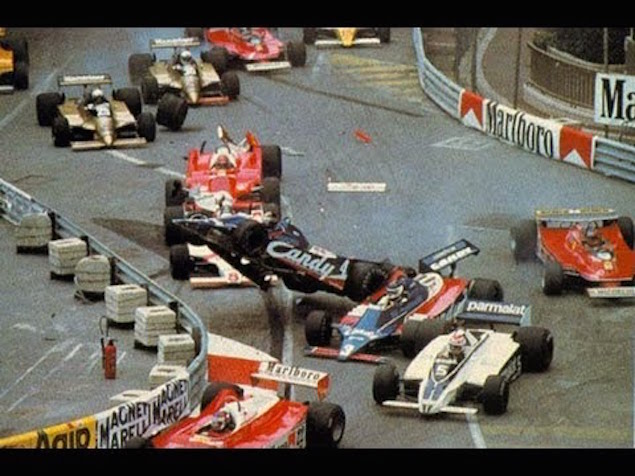 The other Irish driver - Jack O'Malley as he was known.

When I saw Giacomelli was on the brakes, I realised immediately I’m not going to be able to stop. Before I even had contact, I thought “I’m going to hit him, I’m going to brake the front wing, there’s a spare wing in the pits, I’m going to drive round straight to the pits, change the wing and bang, get going again”. Right before I hit him, it all began to go into slow motion. But instead of hitting him and bouncing backwards, his rear tyre acted like a conveyor belt because I hit him with the nose of the Tyrell, so it bounced me up, I landed on his rear wheel and then it went bang bang bang like this until it tipped over. I was actually looking down, at the pebbles of the tarmac on the road. I thought I was going to go forward and land on the roll bar. Instead, it went sideways, perfectly timed with Prost arriving so when I landed sideways on Prost’s rear tyre, it was now like a trampoline. It bounced me into another cartwheel forward onto Jarier (his team-mate.) I hit Jarier from above. He didn’t see anything, just a bang came out of the sky. Again, it was on his front wheel, so it was a conveyor built of trampoline, trampoline, two cartwheels, and I went from twelfth to fifth in about two and a half seconds but had no wheels left.

The funny thing is when I jumped out of the car, Jarier is ripping strips off Giacomelli, blaming him, and I’m thinking “ooh I could get away with this.” Then I jumped across the barrier and Jean-Marie Balestre (President of FISA, the governing body) was there immediately. He started shouting and screaming, blaming me and blaming everybody. But all through this, I’m still thinking they’re going to stop the race and I can get the spare car, which you could in those days, but the cranes came out, cleared the whole thing before everybody came round. It’s one of the most famous pieces of Formula 1 video ever. So Candy washing machines (team sponsor) definitely got their payback and their exposure. But Ken Tyrrell never spoke to me for two weeks.

I suppose you had wiped out his entire team in two seconds.

I was surprised it was only two weeks of silence.