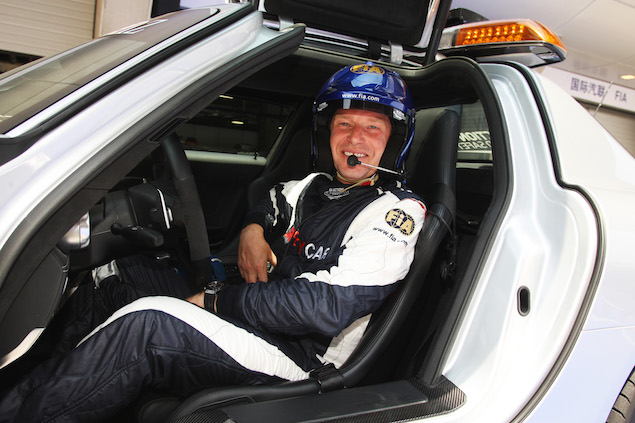 The reason I thought of interviewing you here is obviously this race has a 100% safety car record so it seems a good time to talk to you because not a lot of people realise what the job involves. I think the funniest thing is sometimes when you’re out, especially in the rain, you can hear a driver saying something like “the safety car’s not going fast enough. Tell him to go faster, we can’t keep the temperatures up”. Then if you go and stand at the side of the track and see what you’re doing with that car, you think “f***ing hell. This guy’s absolutely on the limit and maybe a bit over it.”

It’s a little bit special in the wet conditions. You are either a little bit over the limit or under the limit but it’s always very close to the limit. I can hear this sometimes, Herbie (Blash, Deputy Race Director) lets me know - “Bernd, the drivers are complaining. Can you drive a little bit quicker?” Mostly the answer is up to my co-driver, Pete (Tibbetts) because he says “no, this is not possible” because we’re already on the limit. The reason is we’re driving a road car, a sports car. We do have a special tyre from Pirelli, so the grip level is a little bit higher, the compound is a bit softer, so normally it has to work a bit better than a 100% standard tyre but still, when it comes to comparing the performance against a Formula 1 car, forget it. You have no chance.

One example - Eau Rouge in dry conditions: my speed entering Eau Rouge is 240, I have to brake, I have to shift down, I’m accelerating at a speed of about 180 and the exit is 185km. In a Formula 1 car it’s a different way around. They’re entering at 290 and the exit is over 300 which is down to downforce, less weight and power. I drive a Safety Car, not a race car.

Sometimes we talk about this with the drivers, but they understand. I understand their point of view. If Lewis is behind me like in Silverstone he said “can the safety car be a little bit quicker?” If I’m in his position maybe I would say exactly the same but in the end, they know I’m driving on the limit, they know why the Safety Car is there. 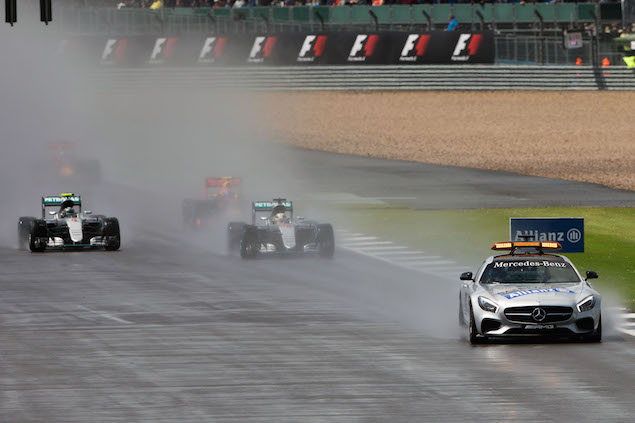 I know you co-driver Pete is a very calm guy and I guess he needs to be.

Unbelievable. Sometimes I really think “Shit!” He’s a really good co-driver and he is always cool. On a normal racetrack like Silverstone, Hockenheim, places like that, it would be no problem for me to sit on the passenger side but at a track like here or Monaco or Baku, I’m not sure if I want to sit on the passenger side, but he trusts me and it works quite well still after 17 years together.

It maybe seems an obvious question to you but people might ask - it’s a race track, you’re a racing driver - why do you need a passenger, what does he do?

He’s an observer and he has very important things to do. He’s doing all the radio contacts to Race Control. He’s a spotter so he’s also looking for debris. Four eyes, four ears, they see and hear more. Sometimes, if it’s a very stressful situation, it’s very important that he’s also looking in the mirror to see what’s going on behind me - if the right car catches up behind us, if there’s debris on the race track. He’s reporting to Race Control so I can be completely focused on the driving style. 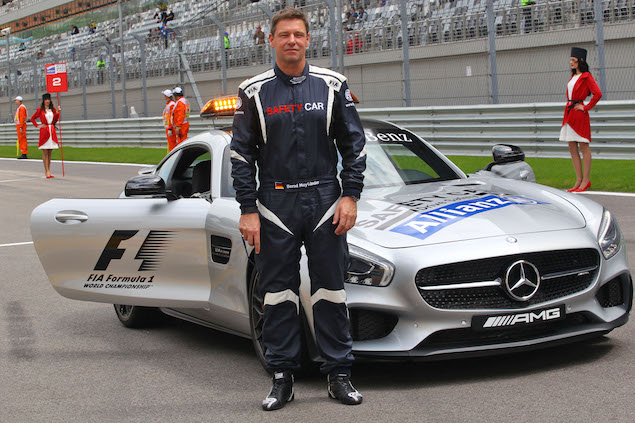 I can listen to everything. We’re connected by an intercom system. I also can talk to Race Control but it’s safer and better if he’s doing all these kinds of jobs and maybe if he gets some comments from Race Control and if I’m really, really focused on something, maybe I cannot understand everything, so it’s always good to have a back-up in the car. After 17 years together, we are like a Sunday afternoon couple.

He’s been trying to teach me about cricket for the past 17 years and hopefully I can finish learning this in the 17th season. But the rules are even more complicated than Formula 1 for me!

This here in Singapore is the 300th.

Thank you. I missed four since I started.