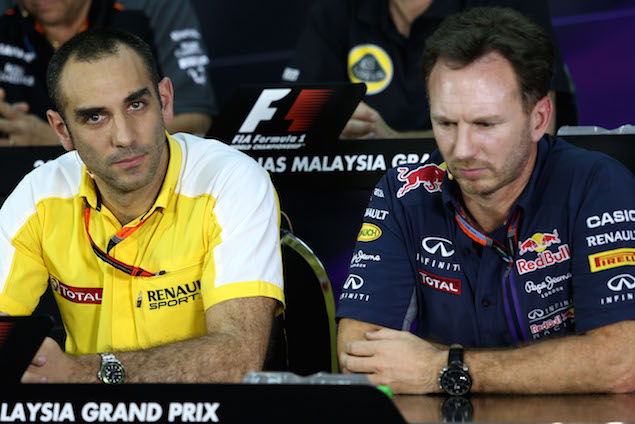 The atmosphere was pretty chilly inside the Sepang press conference room for Friday’s traditional FIA Q&A session. And the air conditioning system working at full blast was not the only reason why…

The relations between Red Bull and its engine partner Renault Sport F1 have been pretty frosty since Melbourne and the tension was pretty evident as Christian Horner and Cyril Abiteboul took questions from the floor.

Even the body language of both directors said a great deal about the current state of their disagreement.

Barely two weeks after a disastrous Australian Grand Prix, the strong initial reactions have naturally been played down and attributed to an overall feeling of frustration and dashed hopes. Still, hearing Horner and Abiteboul’s comments genuinely felt like listening to a dialogue of the deaf.

When asked by F1i if his virulent reply to Red Bull criticism and accusing Adrian Newey of lies came from Renault’s top hierarchy, Abiteboul forcefully replied: “No actually the answer to your question is no, because actually the sequence of events… the quote that you refer to, which I would like to leave behind, is something that happened over the course of the weekend, so not in reaction to any sort of instruction.”

Meanwhile, the Red Bull team principal did not mince his words.

“It’s getting better, so Cyril keeps telling us”, an ironic Horner said.

“You’ve just depressed me!” he replied to a journalist asking about the RB11’s potential straight-line performance deficit in Malaysia as well as on Shanghai and Bahrain’s long straights.

“We have an amount of resource that we try to supplement and assist Renault where we can,” Horner added later on. “We have a strong simulation group. We have strong facilities and CFD capacity within Red Bull Technology.

“Basically, what we’re trying to do is work in co-ordination with Renault, to assist the areas where they’re perhaps not so strong and it’s more of a long term view than a short term view but hopefully the strengths that we have in Milton Keynes can be applied to helping Renault engineer themselves out of their current predicament.”

This prompted an immediate reply from the Renault Sport F1 managing director: “I’m not sure that Christian will actually confirm that there is a lot of Red Bull in the engine that was in Melbourne!” declared Abiteboul.

“We have the opportunity to have a better collaboration. The culture is different, the mindset is different, working practice is different, so I think this is basically the change in management that we have to drive in order to... and make sure that we align the interest of both parties long term and from a strategy perspective.”

The press conference winded up with Abiteboul claiming that Renault was "looking at a lot of options, including getting out of Formula One". According to Horner, this would lead to Red Bull "finding (itself) actually forced out of the sport".

Who is bluffing in the end? Perhaps the "partner who lies" is not the one we had in mind…

Click here for Friday's gallery from the Malaysian Grand Prix

Three reasons why Honda is struggling