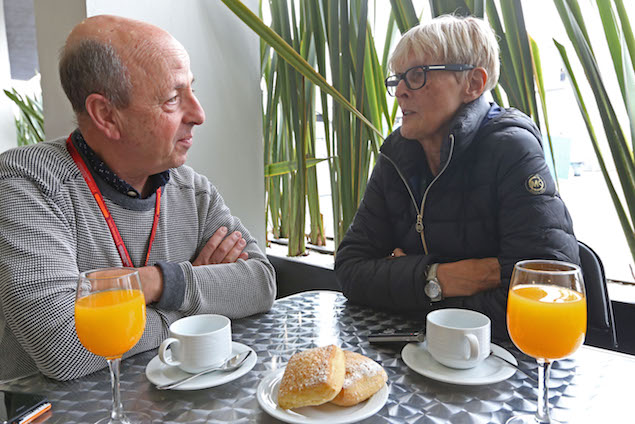 Ann Bradshaw was one of the first ever press officers in F1 – yes, believe it or not, there was a time before teams ever bothered with this role. But by the time she walked into the paddock, she’d already worked in a wide variety of motor sport jobs. Next year, she’ll be back, as Press Officer to Lance Stroll.

The first time I met you, I was 16 years old and I was signing on as a junior marshal at Brands Hatch and you were behind the desk.

Too young to even go on the track.

Was that your first job?

In motor racing, yes. I was the Competitions Secretary at the BRSCC (British Racing and Sports Car Club)

Even before then, you were working in the media.

I was a journalist.

You must have been about 12 years old.

I was. I met some interesting people at the BRSCC. My boss was Nick Syrett and he was friends with Mike Hailwood, who used to come in the office and they used to go off and have long lunches and gossip together.

I also used to deal with a Formula 5000 driver who was a he who became a she. Roberta Cowell. She used to come into my office quite regularly, formerly Robert Cowell who was a World War II fighter pilot and then had the operation and drove a Formula 5000 car. And we won’t mention the marshal who had his blow-up doll sent to the office because he didn’t want his wife to find it and our receptionist inadvertently opened the package and blew it up and walked into my office with it. She came in with it and said, “shall I tell him that there’s a lady waiting for him in reception?”

Let’s move on from the BRSCC. Where did you go after that?

I went to Autosport as Assistant Rallies editor. I loved rallying and there were great days with the Flying Finns - Hannu Mikkola, Ari Vatanen and all those guys. I used to write a column for Ari.

You did a stint with the UK’s motor sport governing body, the RAC.

I did five years press and PR for the RACMSA and looked after the Open Rally Championship and British Touring Cars. I was press officer for the Lombard RAC Rally, and the British Grand Prix and the London to Brighton Veteran Car Run. We had the rallycross grand prix and the kart grand prix. I was also the press officer for the Speedway control board because they shared our offices and they had nobody else to do it. 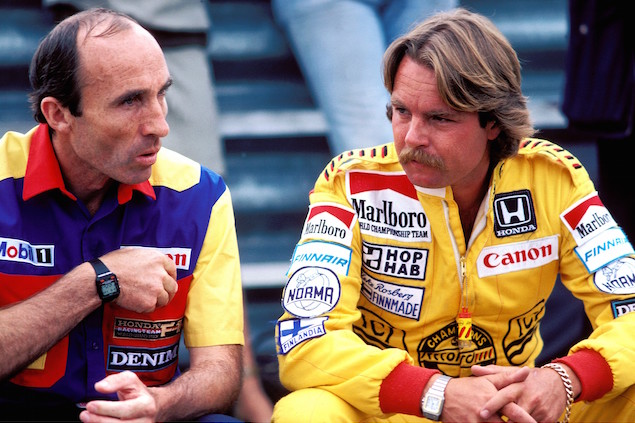 How did you get from the RAC to Formula 1?

I was offered a job at CSS Promotions, because they were looking after Williams doing their sponsorship and PR and Canon had just come onboard as a sponsor and they felt it was time for them to have a press officer. In those days, teams didn’t have press officers. Tony Jardine was with JPS Lotus. We were the first two in there. So that was in ’85 with Nigel (Mansell) and Keke (Rosberg).

Come on then. Spill the beans. Nigel and Keke…

They are chalk and cheese. Keke, I remember having to rush and get his quote at the end of the race but it was always while he was changing and he wore these little g-string underpants! As for Nigel, you couldn’t fault him in the car but outside the car, he did sometimes think the world was against him. If somebody wrote something bad about him, he did tend to take them to task on it. He’d take it personally and get upset and call them in to have a frank and meaningful conversation. I always had to sit in on them. Usually Roseanne (Mrs. Mansell) and myself were party to it.

I reckon Nigel Mansell’s like Magny-Cours in that when we went there, we all moaned about it and when we didn’t go there, we missed it. It’s a bit the same with Nigel, as journalists, we miss him now he’s gone.

Nigel was a character. Remember when he’d had his tooth out and all the journalists round and he produced the tooth that he’d just had pulled out and showed it to them? Can you imagine Lewis Hamilton bringing his tooth to the circuit and waving it at the journalists? He was very funny.

Who was the hardest driver to work with on a daily basis?

I was only with him for a year but Ralf (Schumacher) wasn’t easy. I forgive Nigel a lot because he could drive a racing car, in fact he could outdrive the car. He was a complex character. When I see him, he’s great. I have happy memories. 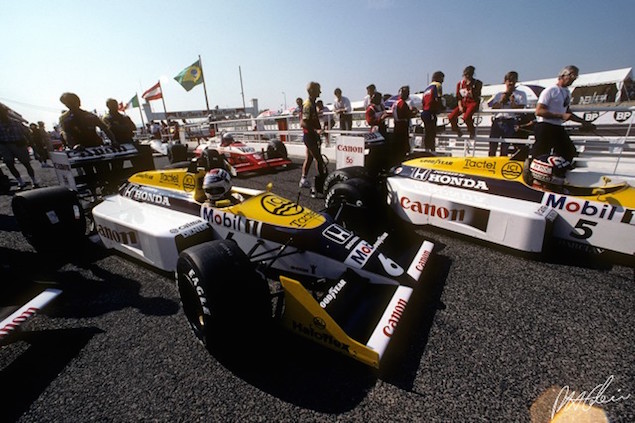 Tell me something interesting about working with Nelson Piquet.

When we were in Mexico and Nigel had a tummy upset after eating raw steak at Murray’s (British TV commentator Murray Walker) birthday party and he had to keep going back to the loo, Nelson waited then nicked the loo paper and things like that. He would say outrageous things in interviews.

Let’s go back a bit again. Did you work with Ayrton Senna at Lotus in 86?

It was Ayrton and Johnny Dumfries.

They were indeed. Johnny was lovely, bless him.

Ayrton was a little bit difficult and new, was he?

He was not as easy because he still hadn’t won his championship. Like any of these guys, they tend to relax a bit once they’ve got a championship or two under their belt but he was fine. I’ve got no problem with him, but he was obviously a little more intense.

Nigel could be difficult, as we’ve discussed already. Damon, I think the best word to describe him, was prickly, wasn’t he?

Damon was in a different world some of the time. He was very intense. I don’t know if prickly, but he was quite intense and quite introverted. I liked Damon because he just got on with things. He didn’t showboat, which is perhaps a good way of describing what the others do. He was a frustrated rock star when he was in F1. He was good fun. I like Damon. 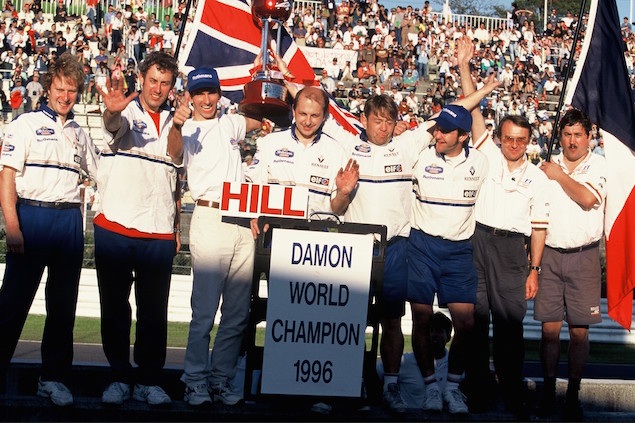 What do you remember about his world championship, about him winning it, about that weekend?

The memories I always used to have of him were his mates, i.e George Harrison and Barry Sheen, and when we used to get to Australia, I used to lecture Barry to make sure that he didn’t anything stupid and just brought Damon back in one piece.

I would think there was no chance of that with Barry…

No, there wasn’t. They were like three naughty schoolboys. I’ll always remember the famous time when Damon and Michael (Schumacher) came together on the track. Barry and George were there and they were going berserk. They were like two schoolchildren getting terribly upset and indignant and rushing around and pointing fingers. But they were always great fun to have around.

What do you recall about Damon winning the title in Suzuka?

It was good fun because it was between him and Jacques (Villeneuve). It was an intense weekend but it was nice that you’d got two team-mates that were going for the same thing but still getting on well. There was a great atmosphere. It was tense but there was no animosity. Afterwards, it was just mayhem because everybody was running around at Karl-Heinz Zimmermann’s (Ecclestone’s legendary catering chief) throwing salad dressing over each other and there was Gerhard Berger and Michael Schumacher and DC (Coulthard).

Then Michael Schumacher with a bucket of water, standing there in front of Frank. I could see his mind going, thinking “Shall I throw this over him? No.”

I was trying to do the press release, sitting there typing away in the same cabin as Frank. Then every so often, the door would burst open and one of them would come through absolutely in a dreadful state of disrepair covered in salad dressing. I remember DC coming in and addressing Frank and saying “I knew why you got rid of me”, and then running out. Then Michael Schumacher with a bucket of water, standing there in front of Frank. I could see his mind going, thinking “Shall I throw this over him? No.” Then he went out. Then we’d lock the door, then they’d come in through the window.

Would you say that’s one of your high points in F1?

Yeah. Then the next day we went off to Tokyo to go and do Monday morning live TV things and for some reason, Damon’s bags got picked up and sent onto Frank’s plane so he’d got no clothes. Then he ended up with some of the guys at the front of the Bullet train trying to drive it. That evening, we went to the The Cavern Club in Roppongi and Damon was on the stage with the lookalike Beatles singing Drive My Car. There was a lot of the British press with us, all the old boys, it was a great celebration.

The relationship between drivers, press officers and the media was very different then, wasn’t it?

Yes. It was very relaxed. It was pre-mobile phones with cameras, so you could go and do things and you weren’t then going to turn your computer on and see it splashed all over the news. I feel sorry for the guys these days because they can’t let their hair down because there’s somebody there to make money out of it.

Nico Rosberg: How the 2016 world title was won