Fernando Alonso will perhaps be Indycar's  most attentive visitor at today's Grand Prix of Alabama at the Barber Motorsports Park.

Just after the event's warm-up session had taken place, the McLaren driver got the opportunity to immerse himself in the world of Indycar, trying Marco Andretti's Dallara for size.

"It's been an exciting ten days since the announcement," Alonso told the media earlier today.

"For any racing driver in the world, to compete in the best races is the main goal, against the best drivers and the fastest cars in the world.

"This is what I'm trying to experience with the Indy 500 adventure. I know it's a very difficult challenge for me to get used to the car, to the super speedway, and know the techniques that you need to be on top of it.

"But I have the best team around me and amazing people that will help me to  speed up this process, and it's so challenging that it's exciting at the same time."

Alonso insisted on a prevailing gradual approach to his endeavour, starting with basic simulator discovery work.

"If the race was tomorrow I would not be ready because I know nothing about it," he admitted.

"On Sunday 28th, I want to be as prepared as anyone else."

Asked what are his feelings about racing against former F1 rival Juan Pablo Montoya, Alonso delivered a mischievous response which brought the house down.

"This is great," he continued more seriously.

"To come here and to drive together in the super speedway will be a massive thing for me. Hopefully I will learn as quick as I can.

"I'm watching a lot of his onboard cameras because I think he's one of the best out there. So I'm really looking forward to talking with him also. Any tips will be very welcome from him." 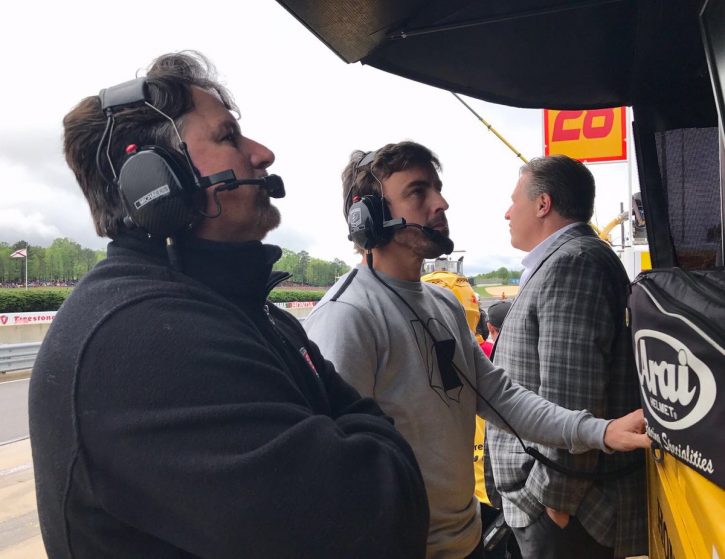 Guess who Sebastian Vettel would love to invite to dinner?